The Senate of the University of Northern British Columbia is inviting nominations for the University’s most distinguished public award, the Honorary Doctor of Laws Degree:

The award of an Honorary Degree is recognition by the University of excellence, eminence and accomplishment in scholarship, research, teaching, the creative arts, business or other fields of service to the public.

Nominees will have established a regional, provincial, national or international reputation for excellence in their field of endeavor, will have made a notable contribution in the service of humanity and, be a role model exemplifying the vision and mission of the University.

Nominations received by the Fall semester will be considered in the current selection cycle, and award recipients may be recognized at the upcoming Annual Convocation Ceremony, or at a subsequent Convocation ceremony. For the specific submission deadline please read the nomination package below.

A UNBC, Faculty or Academic Program will normally host honorary Degree recipients. Nominator(s) who are not affiliated with UNBC may be asked to play a role in hosting the recipient.

Please complete the form below to submit your nomination online.

Alternatively, you can download the Honorary Degree Nomination Package and send in a nomination via postal mail to the mailing address below: 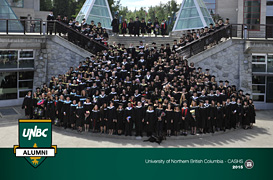