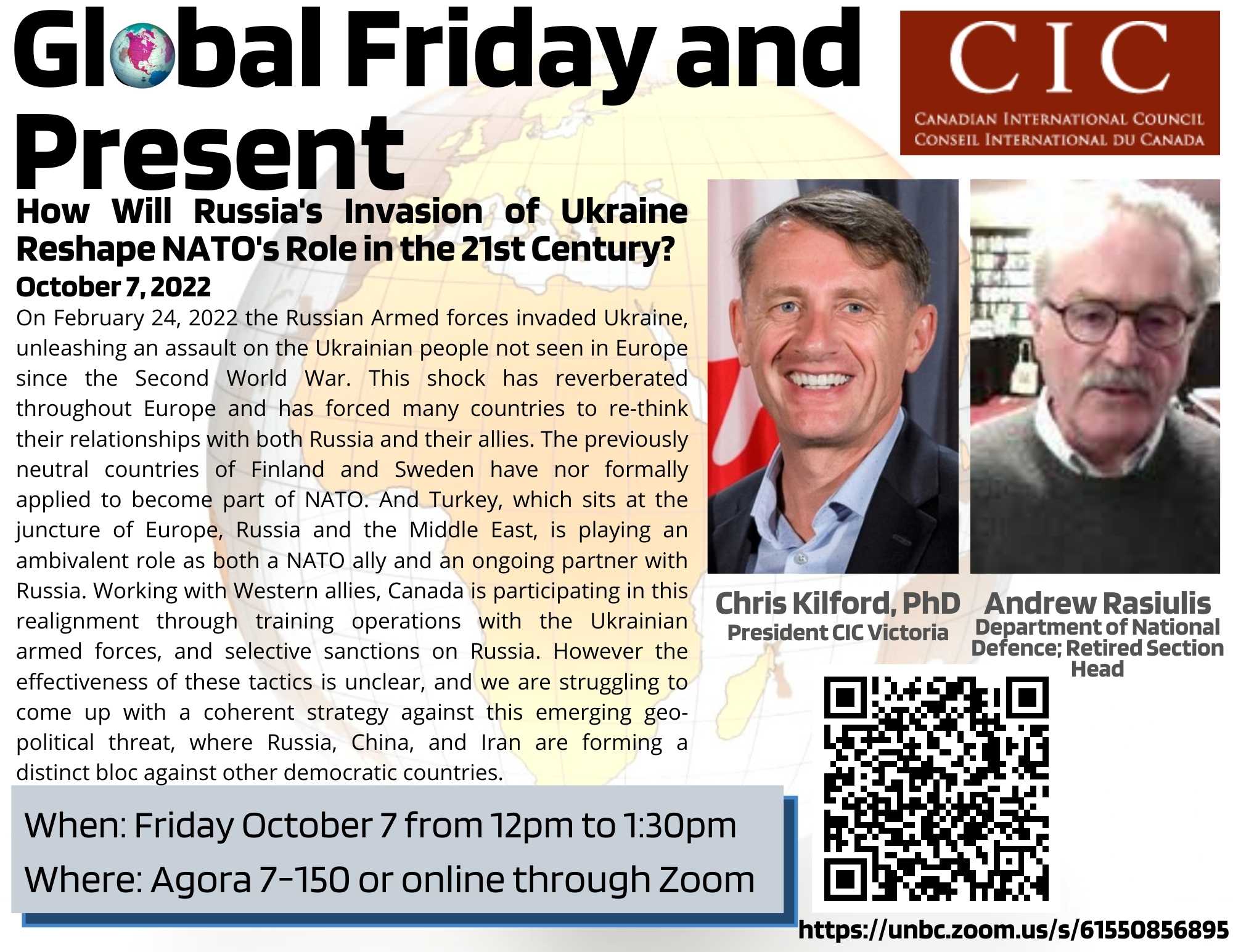 Date: Location:
7-150
Campus:
Online
Prince George
Global Friday Presents
Chris Kilford, PhD
President CIC Victoria
and
Andrew Rasiulis
Department of National Defence
Abstract: On February 24, 2022 the Russian Armed forces invaded Ukraine, unleashing an assault on the Ukrainian people not seen in Europe since the Second World War. This shock has reverberated throughout Europe and has forced many countries to re-think their relationships with both Russia and their allies. The previously neutral countries of Finland and Sweden have nor formally applied to become part of NATO. And Turkey, which sits at the juncture of Europe, Russia and the Middle East, is playing an ambivalent role as both a NATO ally and an ongoing partner with Russia. Working with Western allies, Canada is participating in this realignment through training operations with the Ukrainian armed forces, and selective sanctions on Russia. However the effectiveness of these tactics is unclear, and we are struggling to come up with a coherent strategy against this emerging geo-political threat, where Russia, China, and Iran are forming a distinct bloc against other democratic countries.
Chris Kilford's Speaker Bio: Chris is a member of the national board of the Canadian International Council (CIC) and President of the CIC Victoria branch. He holds a PhD in history from Queen's University with a focus on civil-military relations in the developing world. Chris enjoyed a 36-year career in the Canadian Armed Forces. Chris has served in the Department of National Defence in Canada's Embassy in Kabul, Afghanistan as the Deputy Military Attaché, and also at the embassy in Ankara, Turkey as the Canadian Defence Attaché. Since retiring from the military Chris has become a recognized expert on Turkish foreign policy and Middle Eastern policy and Middle Eastern political issues.
Andrew Rasiulis's Speaker Bio: In 1979 Mr. Rasiulis joined the Department of National Defense (DND) and has served in many posts during his tenure including Section Head in the Directorate of Nuclear and Arms Control Policy; Defence Advisor to the Canadian Delegation for Conventional Arms Control Talks in Vienna; Section Head responsible for policy on Central and Eastern Europe; and Director, Military Training Assistance Programme and Eastern European Policy (re-designated Military and Cooperation in 2009). Mr. Rasiulis' MA thesis, On the Utility of War in the Nuclear Age, developed a theory on limited conventional war and published as a Wellesley Paper in 1981. Mr. Rasiulis has retired from DND and is now a freelance consultant.
In person: Agora 7-150
Online: Zoom Webinar
Find us on:
Facebook
Twitter
Podcast
Global Fridays gratefully acknowledges funding from the Faculties of Indigenous Studies, Social Sciences and Humanities; Business and Economics; Environment; Human and Health Sciences; Science and Engineering.