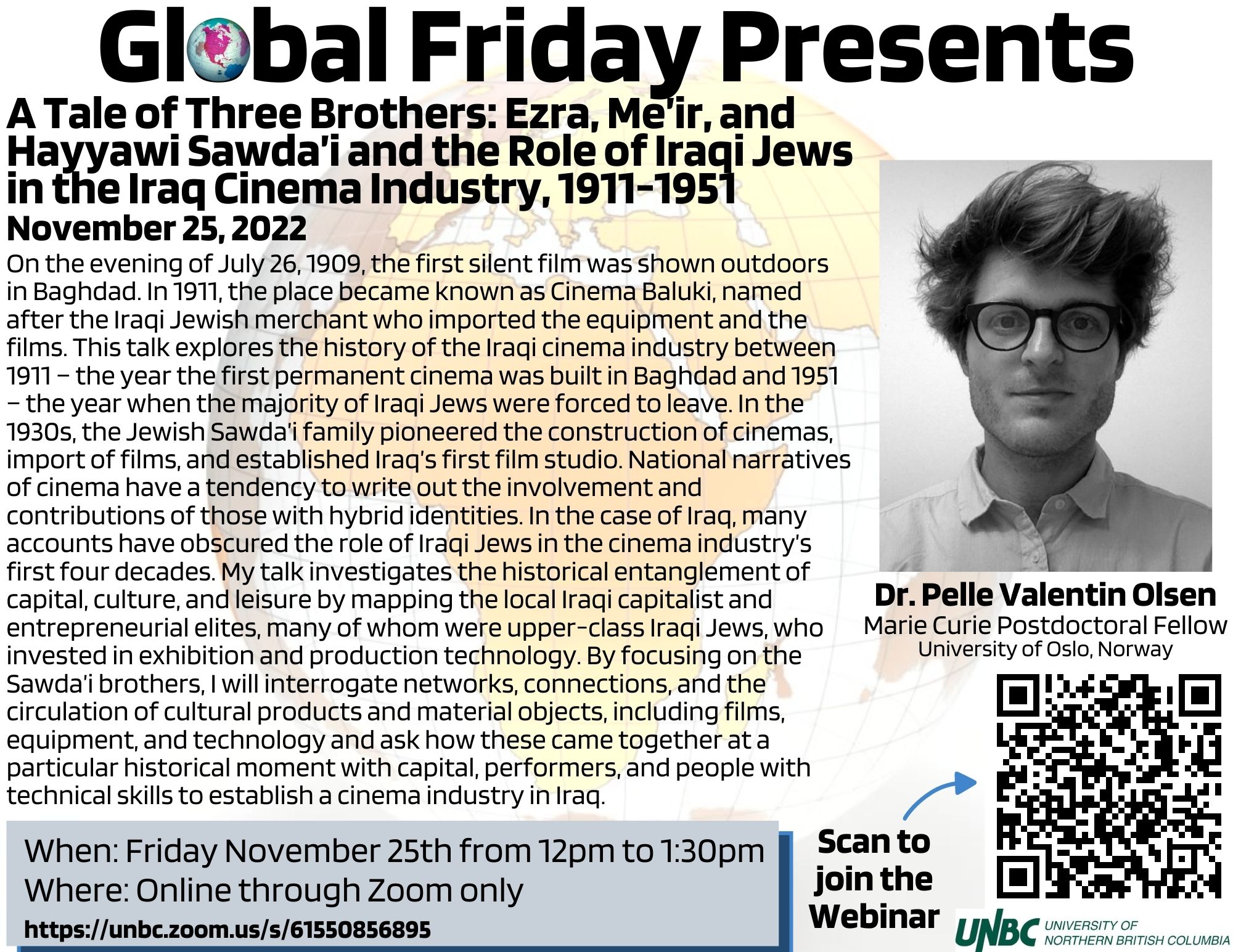 Date: Location:
Zoom Only
Campus:
Online
Global Friday Presents
Dr. Pelle Valentin Olsen
Post Doctoral Fellow
University of Oslo, Norway
Abstract: On the evening of July 26, 1909, the first silent film was shown outdoors in Baghdad. In 1911, the place became known as Cinema Baluki, named after the Iraqi Jewish merchant who imported the equipment and the films. Beginning with the owner of Cinema Baluki, many Iraqi Jews invested in film exhibition infrastructure and technology. This talk explores the history of the Iraqi cinema industry between 1911 – the year the first permanent cinema was built in Baghdad and 1951 – the year when the majority of Iraqi Jews were forced to leave. In the 1940s and early 1950s, the Jewish Sawda’i family pioneered the construction of cinemas, import of films, and established Iraq’s first film studio, Studio Baghdad. National narratives of cinema have a tendency to write out the involvement and contributions of those with hybrid identities. In the case of Iraq, many accounts have obscured the role of Iraqi Jews in the cinema industry’s first four decades. My talk investigates the historical entanglement of capital, culture, and leisure by mapping the local Iraqi capitalist and entrepreneurial elites, many of whom were upper-class Iraqi Jews with international outlooks, who invested in exhibition and production technology. More specifically, by focusing on the Sawda’i brothers, I will interrogate networks, connections, and the circulation of cultural products and material objects, including films, equipment, and technology and ask how these came together at a particular historical moment with capital, performers, and people with technical skills to establish a film industry in Iraq.
Speaker's Bio: Pelle Valentin Olsen is a cultural historian of the modern Middle East. He received his Ph.D. from the Department of Near Eastern Languages and Civilizations at the University of Chicago (2020). His research examines the history of leisure, cultural production, education, gender and sexuality in twentieth-century Iraq. On the basis of his dissertation, Pelle is currently finishing book manuscript entitled Idle Days and Nights: Leisure, Time, and Modernity in Iraq. In 2020–2, he was a postdoctoral fellow in the Global Studies at Roskilde University, Denmark. Currently, he is a Marie Curie postdoctoral fellow at the University of Oslo, Norway. His work has appeared in edited volumes as well as in Journal of Middle East Women’s Studies, Arab Studies Journal, Journal of Palestine Studies, Middle East Critique, Regards, and elsewhere.
Online: Zoom Webinar
Find us on:
Facebook
Twitter
Podcast
Global Fridays gratefully acknowledges funding from the Faculties of Indigenous Studies, Social Sciences and Humanities; Business and Economics; Environment; Human and Health Sciences; Science and Engineering.