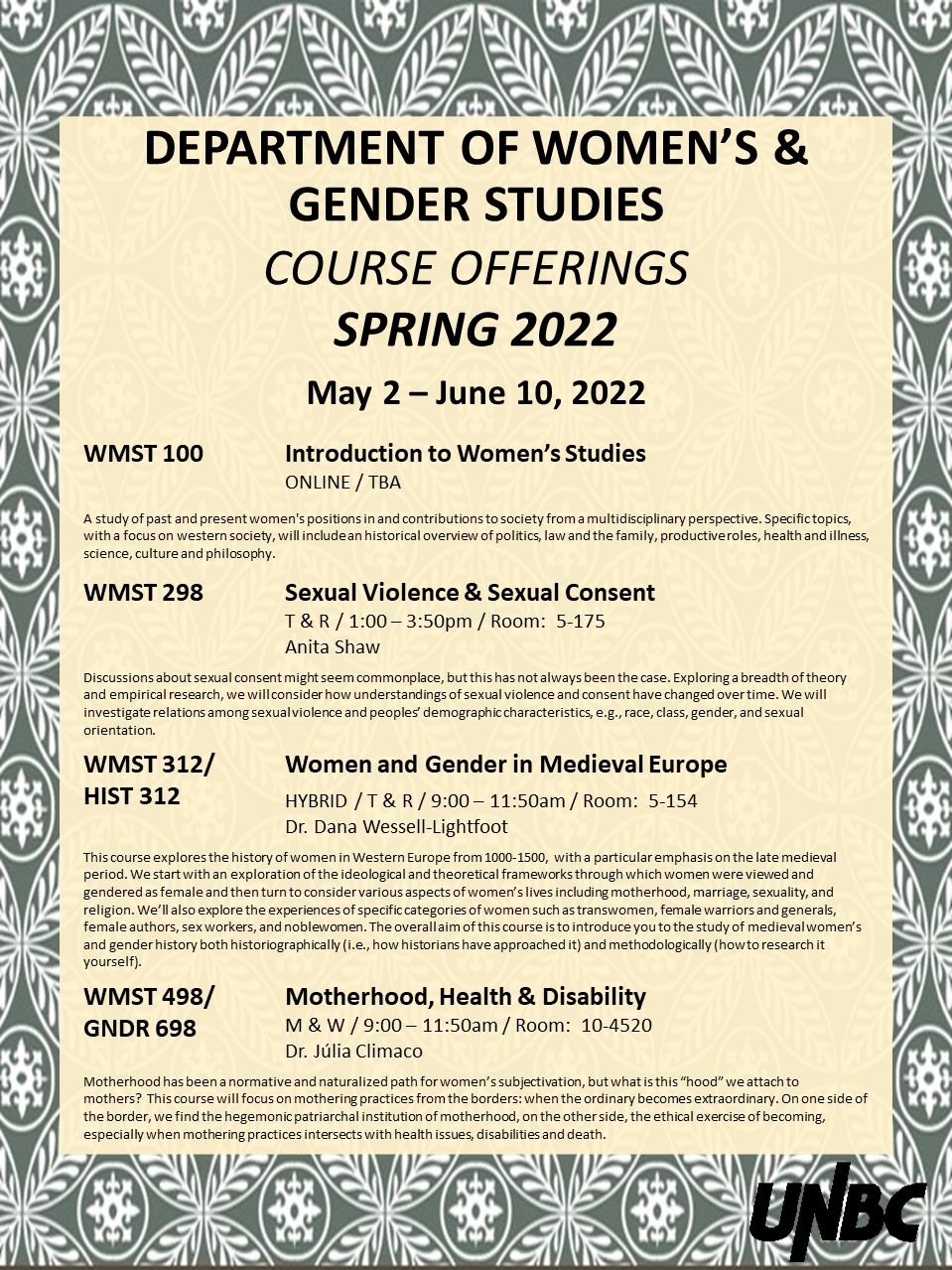 Women’s Studies is an interdisciplinary field dedicated to studying the historical, cultural, literary, and societal role of women and gender. UNBC’s program has strengths in areas such as women’s and gender history; gender, literature, and literary theory; gender, colonialism, and post colonialism; gender and globalization; feminism, justice, and ethics; gender and health; and gender and international studies.

Women’s Studies courses examine all aspects of the human past, present, and future through the lens of gender. As a result, Women’s Studies program offers courses that are relevant both globally and at the most profound personal level. A Women’s Studies degree prepares the student to think critically about cross-cultural and trans-historical constructs of gender and, thus, what it means to be human. The breadth of the program makes Women’s Studies an ideal undergraduate degree that inculcates knowledge and skills valuable in many areas of graduate study, employment, and civic and community life.

The Women’s Studies program offers students the opportunity to engage with the familiar yet challenging subject of how gender structures and influences our world.  Please feel free to contact the program coordinator to discuss how a Women’s Studies degree can help you meet your goals.

UNBC’s Gender Studies MA program was the first gender studies graduate degree in Canada. Our Gender Studies MA is an interdisciplinary program that offers the opportunity to work with scholars and peers who share a focus on women and/or gender as a category of analysis.

Being interdisciplinary in approach, the program has particular strengths in areas such as gender history; gender in literature; gender, colonialism, and postcolonialism; gender and globalization; gender and sexuality; gender and health; gender and the environment; and gender and international studies. Gender Studies graduate students have the opportunity to design a course of study that incorporates gender- or feminism-based methodologies and interdisciplinary while developing expertise in an area of concentration. While providing a transnational frame of reference, we also pay attention to the national and regional; therefore, students emerge from the program with both a broad analytical framework and a well-developed focus.

Gender-based analyses have moved from the periphery of most disciplines to form a large and methodologically sophisticated arena of scholarship. Your program in Gender Studies will deepen your awareness of this growing literature and prepare you to join the community of scholars dedicated to extending knowledge of women and the role of gender as a “first principle” in human society.

Your training will emphasize highly transferable skills: research design, execution, and analysis; critical thinking; and oral and written communication. You will also have the opportunity to present your research and to participate in the life of the feminist research institute at UNBC, Northern FIRE.

Many students who complete the Gender Studies MA elect to enter a doctoral program either in Women’s Studies or in another discipline. However, the very ubiquity of gender in human life means that Gender Studies will also prepare you for virtually every career. Journalism, education, international development, community service, social work, activism, and health are but a few of the areas in which consciousness and analysis of gender are useful and often essential. Those already working in such fields may find it desirable to complete a Gender Studies MA on a part-time basis; in many cases, work and study can be fruitfully combined.

A solid grounding in women’s and gender studies is a sound preparation for participation in one’s own society and, increasingly, the global one. Join us to explore gender studies!