The Healthcare Travelling Roadshow (HCTRS) was conceived at the “Rural Healthcare Workforce Symposium: A Collective Commitment to Action” held in Prince George in the spring of 2009. 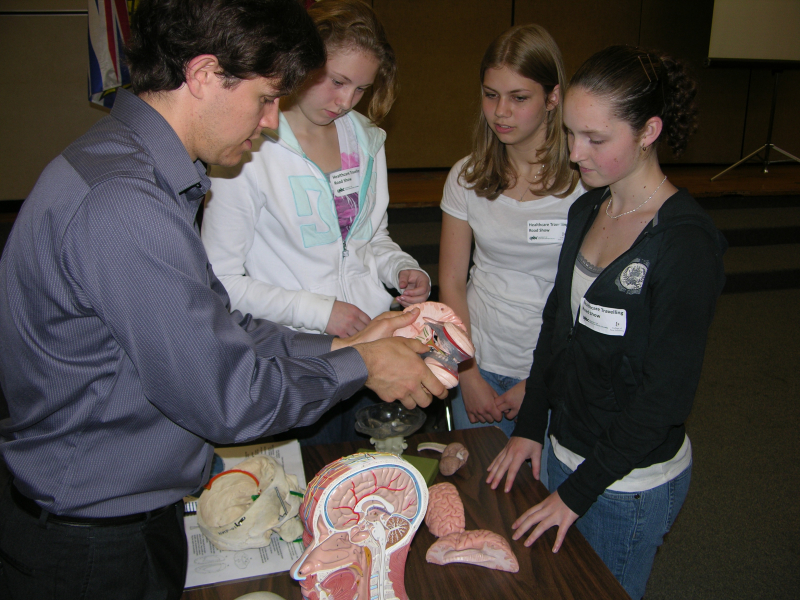 Goals of the Roadshow

During the symposium's final session, the moderator, Dr. Robert Woollard, challenged participants to come up with a tangible idea, that could be implemented within a year, to help with addressing rural health workforce shortages. In response, Dr. David Snadden, then head of the Northern Medical Program; Shelley Sim from the District of Clearwater; and several others initiated the idea of a simple trip that would take Northern B.C. post-secondary healthcare students out to a rural community in the region so that they could connect with rural youth.

Dr. Sean Maurice with the Northern Medical Program led the development of the initiative, from its inception to the first roadshow which visited Clearwater in 2010, and he continues to lead this now provincial initiative. Shelley Sim was also very involved with the pilot trip to Clearwater and helped to refine the idea into a concept that would provide the highest impact for stakeholders.

One of the initial challenges for the Roadshow was finding a suitable time to conduct the trip, taking into consideration when post-secondary healthcare students were available and also when youth were still in school. The first trip in 2010 was overwhelmingly well received, and as a result, other communities requested the HCTRS to come to their regions.

As Dr. Maurice explains, "In the early years, with no formal application process and recruiting healthcare students only from the post-secondary institutions in Prince George, we struggled to get enough healthcare students to commit to the trip. We also realized that we were only able to represent a portion of the diversity of healthcare careers available, due to the limited diversity of healthcare training programs in the north. Additionally, we identified benefits to bringing urban trainees out to see the rural communities.

"Thus, in 2015, we applied for increased funding, to support travel to Prince George, to increase the number and diversity of healthcare students on the trip. Each HCTRS trip now includes up to 12 healthcare students, typically representing eight to nine different healthcare programs, along with three staff.

"As the HCTRS trips became a regular event, we saw a need to expand the number of trips we offered per year, and to also expand to other regions.

"In 2016, we were able to seed a second trip based out of Kelowna, and in 2017, we expanded to two Northern B.C. based trips. In 2019, we were able add a Victoria-based trip. The Southern Interior and Vancouver Island roadshows are run locally through teams at the Southern Medical Program and Island Medical Program respectively, but HCTRS policies and recruitment of healthcare students are coordinated provincially.

"Running this program requires collaboration between many different parties, including the post-secondary institutions across the province, and the rural communities that we visit."

Since its inception in 2010, the roadshow has connected with more than 8,500 high school students in 43 communities throughout BC.