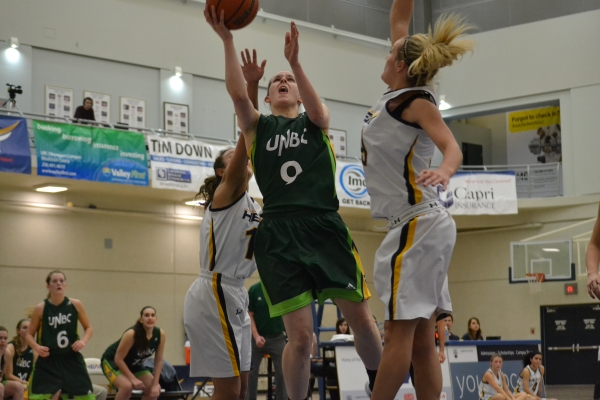 KELOWNA, B.C. – In the penultimate game of the season the UNBC Timberwolves dropped a close contest with the UBC Okanagan Heat 66-60 on Thursday night. The Heat capture their fifth win of season sitting at 5-14, while the Timberwolves dip to 2-17.

Enjoying a sizeable lead of 39-26 heading into the half, buoyed largely by Heat fourth-year Sarah Allison, fifth-year UNBC forward Sarah Robin would put her team on her shoulders and spark a charge to take the third period 20-11 to cut the deficit to four heading into the final quarter.

The Heat would rebound to stave off the Timberwolves, and when second-year guard Claire Elliott drilled a three-ball with 38 seconds left to push it back to 63-56, the dagger appeared to be in the coffin.

Robin would continue her work of miracles to keep her team in the game, however, dominating the following possessions to first make a critical free-throw and then sink an improbable fade-away three in traffic to cut the lead to three 63-60 with still 19 seconds left.

Coming out of a timeout, the Heat players clamped down hard on defense and fought their way through the full-court trap employed by the Timberwolves, with Angela White, playing the final two games of her career, calmly sinking three more free-throws to ice the night.

Robin would wrap up with a game-high 26 points to go with eight rebounds. Athens product Vasiliki Louka finished behind Robin with 14 points and seven rebounds. Jasprit Nijjar just missed a double-double for the Timberwolves with 10 points and nine rebounds.

Allison would lead the Heat with 23 points. Third-year forward Kayla McFadden also had a near double-double with 15 points and nine boards.

The Heat forced 33 turnovers out of the Timberwolves, creating 31 points off of turnovers including 19 team steals.

UNBC won the battle of the boards 50-42, though the Heat outshined their opponents in offensive boards 16-7 for 17 second chance points to the Timberwolves' six.

Both teams will play their final games of the season Friday night at 8 p.m. at the UBC Okanagan gymnasium.

Watch the action online and stream live stats at canadawest.tv.