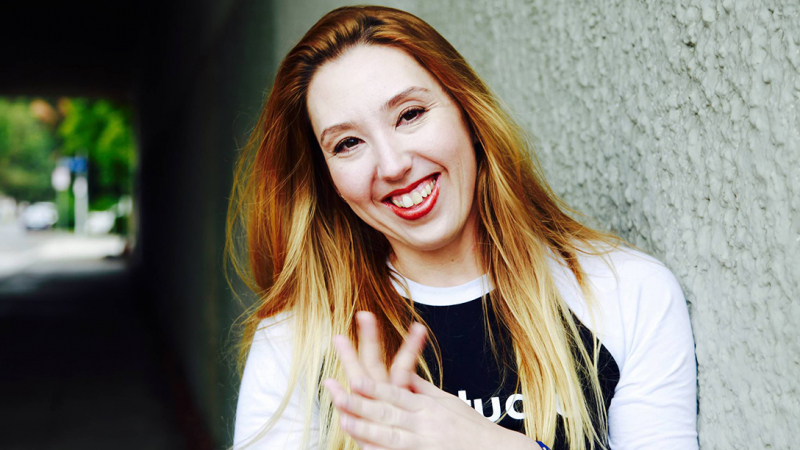 Entrepreneur Selena Paskalidis shares her story of applying her UNBC degree when she co-founded a digital start up.

When I chose UNBC, I hoped my degree would help me go places, but I never dreamed I’d end up here. I studied marketing and international business before the world had any idea how it would embrace digital alternatives to our way of life. Now I’m a co-founder, co-owner and the chief financial officer of a tech firm that’s leading the way in content streaming. It’s a job I couldn’t have made up when I took my first steps on campus as a UNBC student.

Before starting my company, I worked in long-form drama and television. Production companies then were figuring out how to “go digital.” Digital was so new it was only taking hold in music where people were holding seminars about how iTunes would disrupt the way people interacted with music. The company I worked for tasked me with a mission: find out more about this trend.

It was 2009. I was working on an MTV series about 20-something-year-olds in Whistler. A revolutionary show for its time. New sponsorship deals were popping up for MTV’s online content and I realized that’s where the audience was. We were still shooting on tapes at the time, but the writing was on the wall. Digital technology was democratizing the way we made content.

From MTV, I went on to develop digital strategies for shows airing on the Food Network, History Channel and Discovery. I learned to build content that engaged audiences on interactive websites and mobile apps. It was my first foray into merging two industries: tech and entertainment. I was in the thick of things when content owners were just gaining direct access to their audiences. And we were successful. An app I produced for a show called Eat St. had the most downloads in two weeks and held the #1 spot for lifestyle apps in the U.S. and Canada even longer.

I was also producing my own content and wanted to take control of distribution and understand how audiences were consuming my films. The frustrating reality then was that there were so many gatekeepers. When YouTube exploded, it was game-changing, but YouTube had creators give their content over to the platform.

In 2011, I met some like-minded people who also wanted to democratize streaming—to marry content with content producers’ branding. That year, with my new partners Joe Pascual and Phoenix Gonzalez, I co-founded dotstudioPRO in Vancouver.

Our company allows content owners to manage, distribute and monetize their content through applications like Roku, AppleTV and Google Play. Users can also syndicate their content to digital network providers like PlutoTV and Xumo. Put simply, our platform gives people the opportunity to launch their own Netflix and send their content to branded networks. We make it easy and affordable to deliver content to the consumer.

I’m proud of what we’ve built. DotstudioPRO helps clients reach more viewers and turn a profit faster. We’re efficient and use the best tech. Our software vastly reduces the cost of launching and helps our clients, which include the Minnesota Vikings, Laugh Out Loud and American Beauty Star, to manage different distribution points and monetization opportunities. As CFO, I’m also excited about what we’re doing with standardized reporting, which might sound boring, but it’s important as we focus on creating a deeper level of customer engagement with the content and each other, rather than just being the next Hulu or Netflix.

Looking forward, at dotstudioPRO, our focus is to make sure viewers find our clients’ content. We’re doing this by using our system to pass on enriched meta data to the platforms people are using. It’s basically search engine optimization for content streaming—and we’re paving the way.

As a student, I never guessed I would end up in entertainment, nor did I think that I would own and operate a technology company. But the education I received from UNBC has been the foundation for building a small start-up of three people into a 15+ company, and we’re growing.