A lot has changed at UNBC since former Vice-President Research Dr. Max Blouw left in 2007, but the current Research Universities' Council of British Columbia President says one thing that has remained the same is the commitment that UNBC has demonstrated to the region it serves. 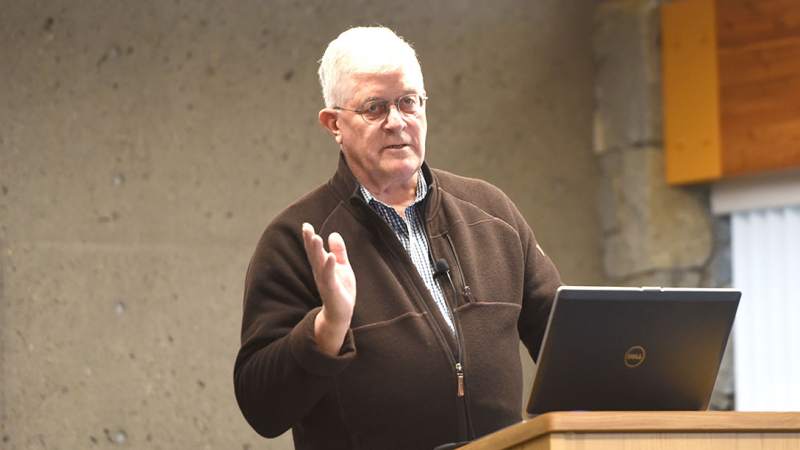 Former UNBC Vice-President, Research and current Research Universities' Council of British Columbia President Dr. Max Blouw spoke about the changes he has seen in academic research during his career at a keynote address during Research Week.

When Dr. Max Blouw came to UNBC as a biology professor in 1995, he saw the potential the University had to connect its research agenda to the communities it serves.

Now the president of the Research Universities' Council of British Columbia (RUCBC), Blouw returned to UNBC this week to deliver the opening Research Week 2020 keynote address. As he walked the halls, visited with former colleagues and met new faculty members and students, he found a University that is living out its mission to be in the north, for the north.

“We knew if UNBC could engage with the issues of the North very effectively, if it could advance knowledge and advance the application of knowledge and have that knowledge translated into positive activities in the areas of health, the economy, cultural activities, that would be a measure of success,” Blouw said. “That is occurring in spades.”

Blouw helped to build the research culture at UNBC serving as Vice-President, Research from 1997-2007. After leaving UNBC he served two terms as President and Vice-Chancellor at Wilfred Laurier University. He took on his new role with RUCBC last year.

Blouw’s keynote address focused on the changes in the Canadian academic research landscape over the course of his career. He noted that research has become more institutionalized and increasingly focused on the potential economic outcomes. At the same time, he pointed that modern research is often conducted in larger groups there is an unrelenting push for more productivity.

For a small, research-intensive University like UNBC, these changes provide an opportunity to leverage its advantages around building relationships and promoting interdisciplinary projects.

“The smaller you are, the more focused, the more coherent and the more integrated the relationships,” he explained.

At the same time, Blouw cautioned UNBC must be strategic on how it engages in the global research environment. The University needs to choose where it will be more effective and focus its efforts there.

“As a smaller institution, UNBC has a big profile and a big reputation,” he said. “It is founded on making choices on supporting interdisciplinary research, hiring fabulously committed and talented people, having a student body that wants to be here and is really engaged. It’s a very successful formula and one that everyone at the university should be proud of.”

One of the things Blouw found most gratifying about his visit was the energy he saw at the Prince George campus.

“It’s wonderful to see that the talent that was recruited at the beginning has now been amplified by new recruits with new people coming in,” he said. “The engagement of the institution with what’s important to the society that supports it is profoundly gratifying for me to see. It is really heartwarming to be back.”