UNBC Three Minute Thesis winner Cheri Brown is studying the lived experience of Indigenous students at post-secondary institutions. She hopes her findings will lead to more supports for Indigenous learners. 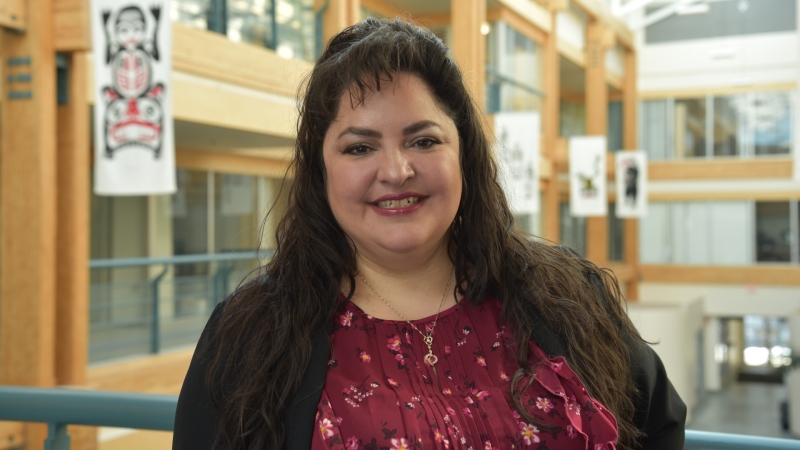 Cheri Brown was the winner at the UNBC Three Minute Thesis competition and will be representing the University at the regional event in Winnipeg.

When Cheri Brown takes the stage at the 2022 Western Regional Three Minute Thesis Competition at the University of Winnipeg on May 6, she will be taking one more step in advocating for social justice and equitable treatment of Indigenous Peoples and cultures in Canada.

“People need to be aware of what Indigenous students are facing in the academy, including the lowest enrolment and persistence to degree rates and highest attrition rates in post-secondary education of any demographic,” Brown says.

It's a complex topic to distill down to a three-minute presentation, but that's what the event is all about. It gives graduate students the chance to present their thesis topics using plain language and only one slide. Brown was initially not planning to enter the university-wide contest but decided to represent the Faculty of Indigenous Studies, Social Sciences and Humanities after they held their own collaborative three-minute thesis event. Based on her performance, she received support from FISSSH Dean Dr. Kriston Rennie and coaching from English Professor Dr. Kevin Hutchings to enter the UNBC contest.

Despite her early hesitation to sign up, Brown placed first at the UNBC event, held virtually during Research Week. Now she is preparing for the in-person regional event in Winnipeg.

“I am grateful for a supportive department and Faculty who have taught me that my unique approach is valued and that I should never stifle or silence my voice because there are plenty of others who will attempt to do that to me when I speak critically about a broken system that disadvantages Indigenous knowledge and urgently requires reform,” Brown says.

The regional event in Winnipeg features 16 entrants from universities across Western Canada. Later this year the Canadian Association for Graduate Studies will host the National Three Minute Thesis showcase at its conference in Montreal.

Brown’s thesis topic comes directly from her experience as an Indigenous student at universities in Canada and the United States. At times during her post-secondary journey, she’s received hurtful racist and discriminatory treatment based on her Indigenous ancestry which left her feeling alone and isolated.

“Once I realized this type of mistreatment was widespread and coming from a place of privilege within a colonized country and society, I recognized how important my voice was in these conversations,” Brown says. “I stand proud in my Indigenous heritage despite any opposition. There is nothing more important to me that I could study for my graduate work than this.”

She remains hopeful her research will lead to meaningful change.

“In my lifetime, I have seen an evolving Canada. I have witnessed the resurgence and revitalization of Indigenous culture and spirit, which has never gone anywhere, but has been suppressed for far too long,” she says. “I sense a tremendous and powerful uprising of Indigenous strength and voices. As Indigenous People, and those who support us, we are all fighting and overcoming, and we will do this together.”

Brown is looking forward to travelling to Winnipeg where she will have the chance to visit the National Centre for Truth and Reconciliation at the University of Manitoba.

“The Truth and Reconciliation reports hold so much story of the Indigenous experience in Canada about the abuse and suffering stemming from the residential school system and I want to personally honour them as such,” she says. “Going through the archives is my way to grieve those hurts and send prayers and healing thoughts to all who were harmed by the residential school system.”