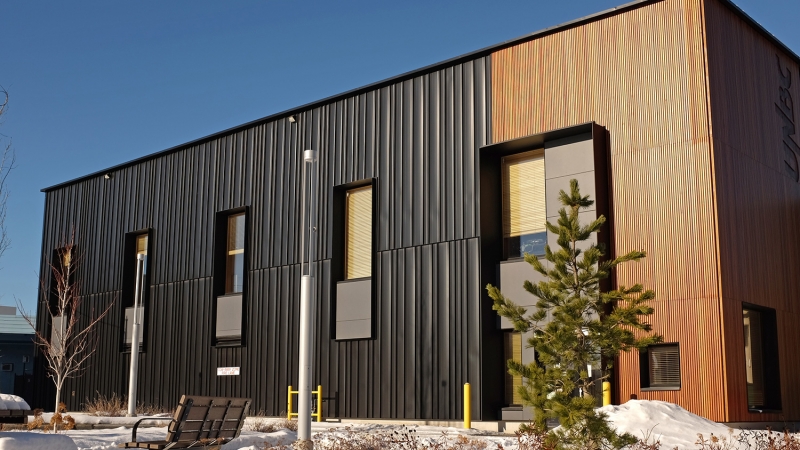 There’s nothing like a cold snap to prove the value of reliable energy and energy-efficiency. And with temperatures dropping to almost -40 degrees Celsius last week, the City of Prince George and the University of Northern British Columbia have two successes in downtown Prince George that demonstrate the value of local ingenuity and local wood products.

The UNBC Wood Innovation Research Lab (WIRL) is built almost entirely of wood and houses state-of-the-art equipment used to test different types of wood building materials. When it opened in 2018, it was considered to be one of the most energy-efficient buildings of its kind in the world. How did it perform last week, when temperatures dipped to almost -40 degrees overnight?

“Over the course of the first two weeks in February, when temperatures fluctuated between -1 and -37 degrees Celsius in Prince George, the heating demand in the Wood Innovation Research Lab only fluctuated 3.5%. We barely noticed any change at all,” says UNBC Facilities Director Dr. David Claus. “In comparison, when the temperatures got really cold, the heating demand for the main campus buildings doubled.”

Although it’s more than 900 square metres (nearly 10,000 square feet) and 10 metres tall, the Lab’s heating bill is about the same as a typical 1600 square foot house. The main reasons for this performance are the 50cm-thick walls filled with insulation and the attention given during design and construction to making the building as airtight as possible.

During last week’s cold temperatures, the City’s Downtown Renewable Energy System (DRES) operated with 100% renewable energy in the form of sawmill residuals from nearby Lakeland Mills. This “wood waste” is burned to heat hot water, which in turn heats nearly a dozen buildings downtown, but specialized equipment at the mill keeps emissions very low.

A 2020 Natural Resources Canada study of nearly 500 community-based and commercial bioenergy systems in Canada shows that the Prince George system is one of the largest and the only one of its size that operates with no help from fossil fuels, even during temperatures approaching -40. The result for Prince George has been that greenhouse gas emissions associated with using natural gas to heat City buildings has dropped 30-40% since the Downtown Renewable Energy System became operational in 2012, making it the City's single greatest contributor to reducing emissions. Among the buildings it heats are City Hall, the Library, Two Rivers Gallery, the RCMP Detachment, the Law Courts, and the Wood Innovation and Design Centre. Together, these amount to 660,000 square feet of building space.

The City’s Climate Change Mitigation plan, adopted by Council in 2020, established an initial target to reduce greenhouse gas emissions by 5% by 2025. With buildings (especially the heating of buildings) accounting for about 25% of the community’s annual GHG emissions, the Wood Lab and the downtown renewable energy system demonstrate local opportunities to reduce that number.

Both the DRES and the WIRL are also excellent examples of local innovation and local economic development. While the energy system sources energy from Lakeland Mills, the Lab was built by a local contractor (IDL Projects) and many of the wood building components were supplied by Winton Homes.