Bev Best's love of learning led to earning her MBA degree in June, Best's fourth UNBC degree that she now holds. Best is committed to using her passion for education to inspire other Indigenous students. 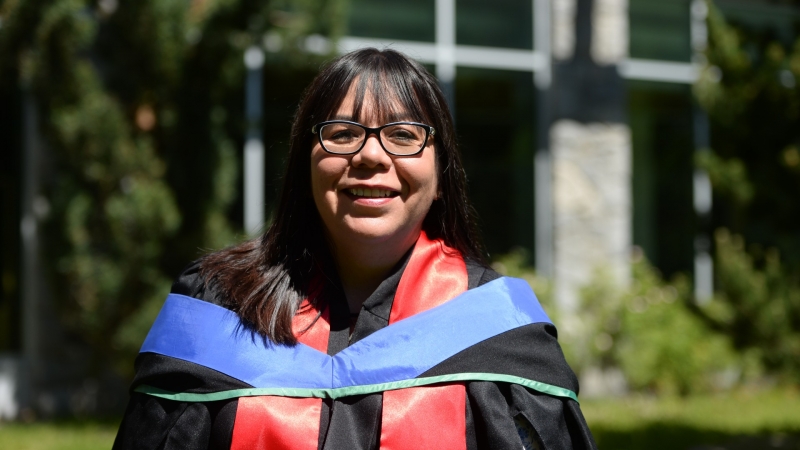 Bev Best's MBA is her fourth degree she has earned at UNBC in 15 years.

Growing up, Bev Best always knew she wanted to make a difference.

Not only for herself but to inspire a generation or more of First Nations students.

She was tired of the hurtful comments she received as a youngster. Of being placed in lower-achieving classes because she was Indigenous.

And more than anything, she wanted to prove that she was more than a stereotype.

So, she did something about it. She dedicated herself to education. And become a leader.

On Friday, Best will receive her Master of Business Administration degree during the University of Northern British Columbia’s virtual Convocation.

It’s her fourth UNBC degree. She is the only person ever in the University’s 31-year history to hold four degrees from UNBC.

“I have received a lot of support and encouragement at UNBC which made it easier to continue to go to school,” says Best, the Manager of Aboriginal Student Engagement. “The last MBA degree was a huge opportunity afforded to managers, and I jumped at it, knowing it was another Masters and not a PhD. That door is still an option but for now, I am happy with my education that I get to use every day at work.”

Best’s journey at UNBC is one that began in 2006 to pursue her Bachelor of Education degree in the elementary stream in Prince George. She was previously working as an Aboriginal Education worker at Fraser Lake Elementary High School.

“I would show up for an interview to rent apartments and one look at me and all of a sudden the places were miraculously rented already,” she says. “It was the biggest challenge, as I ended up living in a very scary place where there was a lot of crime. Coming from a small town made it harder to adjust to city life and difficult to make friends.”

Earning her teaching degree left Best wanting more. Of going even further. She entertained the thought of getting her PhD but getting there first required earning a master’s degree.

She was teaching as a Teacher on Call for School District 57 and going to UNBC as a Master of Arts - First Nations Studies student.

“After my experience in school, I knew I wanted to make a difference in First Nations students’ school experience. My mother is a residential school survivor and I have always felt an obligation to pursue the opportunities that were denied to people like my mother and the many children who never came home from residential schools.

“It was too high a price to pay by them but my education is not nor will it ever be wasted. I dedicate my life to using my education to educate others and make positive change in systems designed to oppress.”

It was in the middle of Best’s MA that she became a UNBC employee. First as a Teaching Assistant in the First Nations Studies department, then as a sessional instructor for the School of Education teaching Indigenous Epistemology. She started as the Interim Director First Nations Centre in 2015 and successfully attained the position of Manager Aboriginal Student Engagement a year later. She finished her first master’s degree and started the MBA while working full-time in the Centre.

Earning four degrees in 15 years was not an easy task, especially maintaining a work-life balance during her MA and MBA degrees.

Best found it quite challenging to maintain a healthy lifestyle while going to school and working full-time, but she also had an amazing team at the First Nations Centre who not only supported her but assisted whenever they could, to make it easier.

“I also have an amazing husband who supports me in whatever endeavour I take on, whether it’s by volunteering on the side or work or school, he has been my biggest supporter,” she says. “It wasn’t until this last degree that I felt was the most challenging, I had taken on something that was way outside of my comfort zone or knowledge and to have been in it during the UNBC strike, and then the pandemic, my physical health has been the one thing that suffered, I have gained quite a bit of weight and now working to get back my health again.”

But in the end, it was worth it. Best is a strong Dakelh woman who is an inspiration to not only other Indigenous women but other non-Indigenous students, women and colleagues at UNBC.

“I have always been and will continue to be an advocate for Indigenous learners. It is my passion to see Indigenous women succeed,” she says. “As a Dakelh woman, it is very important for me to be a good role model and to provide as much support as I can to upcoming students to help them see the advantages an education gives to someone.

“I never could have imagined myself here today, but I am and I want all Indigenous learners to know it is possible. It just takes time, courage and dedication.”

If anyone asks her how she did it ­­– earning two bachelor’s degrees and two master’s degrees, she would tell them she was too stubborn to quit. That “quitting would have been worse for me than to fail. If I failed any of these journeys, then at least I could say I tried and I would keep trying, but if I quit I would find it hard to forgive myself. Trust me, there were many times I wanted to quit.”

Best does have some advice for future UNBC students. She says students should always seek out supports, whether they feel they need it or not, having a community of supports they can lean on always helps the journey be a little easier.

“The First Nations Centre is one example of how a community helps student succeed, even if that means to just come, sit and listen to other student’s stories, Elders stories, or your own,” she says. “Everything is always easier when you are not alone, and the university provides a lot of opportunities to not be alone.”