English Assistant Professor Dr. Troy Bordun's forthcoming paper examines philosophical ideas of luck in the context of the Marvel superhero Domino. He will also be teaching a class this semester on comic books and graphic novels. 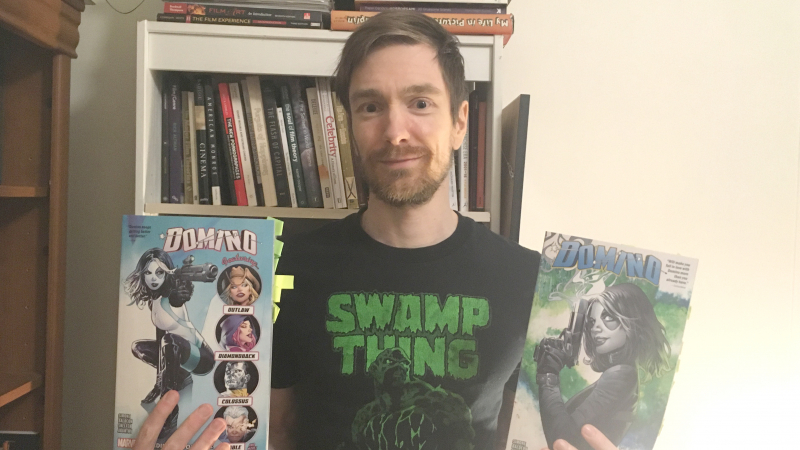 Can we make our own luck? Or does luck come down to pure chance?

English Assistant Professor Dr. Troy Bordun explores these questions through the lens of Marvel Comics superhero Domino in a soon-to-be-published paper in the Canadian Review of Comparative Literature.

Domino, a member of the X-Force team of superheroes, is the titular character in a series of graphic novels released in 2018-19.

“Domino is known for risk-taking, her trust in chance, and her willingness to play chicken with her mortality,” Bordun explains. “These aspects make her an exemplary figure for philosophical reflection.”

In the paper, titled Domino’s Philosophy of Luck, Bordun uses philosophical concepts about luck delineated by French intellectual Georges Bataille to assess Domino’s good luck through an analysis of her power to affect probability, the inseparable link between good fortune and death and expressions of love as a risk-taking venture.

“Domino’s experiences and voiceovers about her mutant powers articulate a consistent and coherent ontology namely, we have the capacity to reflect, acknowledge, and appreciate that our coming into and out of existence is a throw of the dice,” Bordun says.

This semester Bordun is teaching a class devoted to the topic of comics and graphic novels.

English 298 examines what it means to tell stories with words and images. Students use primary texts, scholarly articles, and audiovisual material to engage with the world of comics and graphic novels, including how their structure contributes to story-telling, how they address issues of identity and representation, and the linkages between comics and film.

“The comics medium offers readers an experience to engage with tropes and topics common in traditional short stories and novels,” Bordun says. “But with its combination of text and art, comics open up new avenues of investigation, both formally and culturally.”