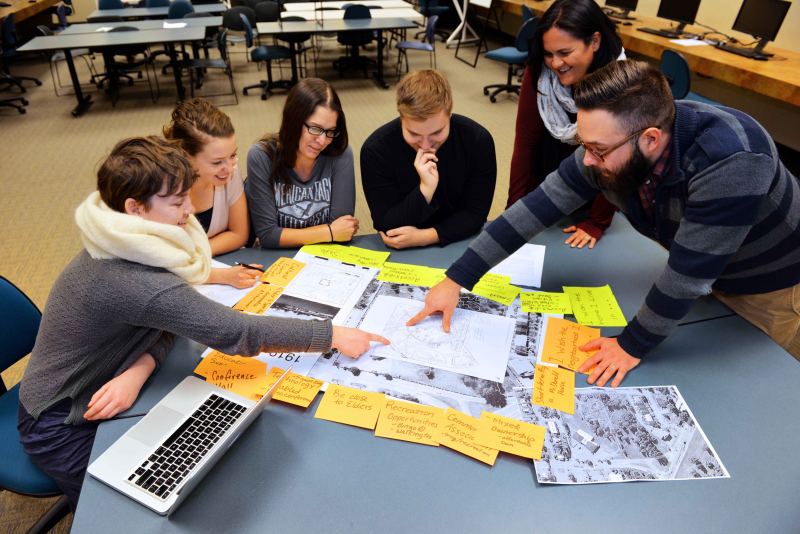 In four short months, Rebecca DeLorey gained valuable experience working with a client, as part of a team, on a real-life project.

It’s exactly what she was searching for when she enrolled in Environmental Planning 415 – Ecological Design.

DeLorey and her classmates were tasked in September, 2016 with creating a design concept for a livable urban village that the Aboriginal Housing Society of Prince George (AHSPG) is exploring as a possible development for a 6.7-acre parcel of land at 1919 17 Ave.

The students connected with First Nations Elders about traditional living arrangements and carried these discussions into their concept and final design. They also met regularly with the AHSPG to assess what their needs were.

Funded by donors, the ENPL 415 class was part of UNBC’s Undergraduate Experiential Service Learning program that is designed to extend the classroom experience beyond the university setting.

The funding allowed ENPL professor Dr. Mark Groulx with help from co-instructor Sara-Lynn Harding, to redesign the course from a lecture-style to a studio-type course, which allowed for more engagement and interaction between the students, the course’s partner – the AHSPG – and stakeholders such as the City of Prince George.

“It’s really brought everything we’ve learned in the last four years into practice,” said DeLorey, a fourth-year School of Environmental Planning student. “The course style complements working on a team and working on our concept design, applying theoretical concepts and how it might play out with this site.”

One of the design criteria included an emphasis on Indigenous design, which students explored through the use of a circular structure and representation of the medicine wheel after hearing these were priorities from the community.

It was a daunting challenge, but the four students – DeLorey, Catherine Lessard, Tyson Baker and Heather Mitchell – were excited to take it on.

On Dec. 8, 2016, the students presented their final concept at a community open house at the Prince George Public Library, hosted by the AHSPG for neighbourhood residents, community service providers, and City of Prince George officials.

“Coming from a design background, I really enjoyed the studio aspect of the course and being able to work in a small group while conducting community sessions,” said Heather Mitchell. “It’s a great way to see what Prince George might look like in the future, with housing designs that aren’t currently represented in Prince George.”

Groulx acknowledges that what the class designed isn’t ultimately what the AHSPG is going to build, but the students incorporated creative ideas into the design process and inspired what the AHSPG might take forward into the site design.

“It’s a very important site for Prince George,” he said. “It’s centrally located to the hospital and downtown and presents an opportunity to bring some higher density into Prince George. This really could be a project that shows a different way of developing a site.”

The AHSPG has put in an offer to purchase the property, which is subject to rezoning, according to AHSPG executive director, and UNBC graduate, Christos Vardacostas. Funding needs to be secured and more community engagement is required before anything is built.

Vardacostas was impressed with the final design concept the students put forward.

“Because of the sheer size of the property, we had some discussion about the parameters of 250 residential units. I’m impressed with what they’ve come up with,” he said.