The new UNBC Timberwolves jerseys look amazing on the pitch and on the court, and they won over the judges at the Council for Advancement and Support of Education. The project took home a handful of awards in the storytelling and Diversity, Equity and Inclusion categories. 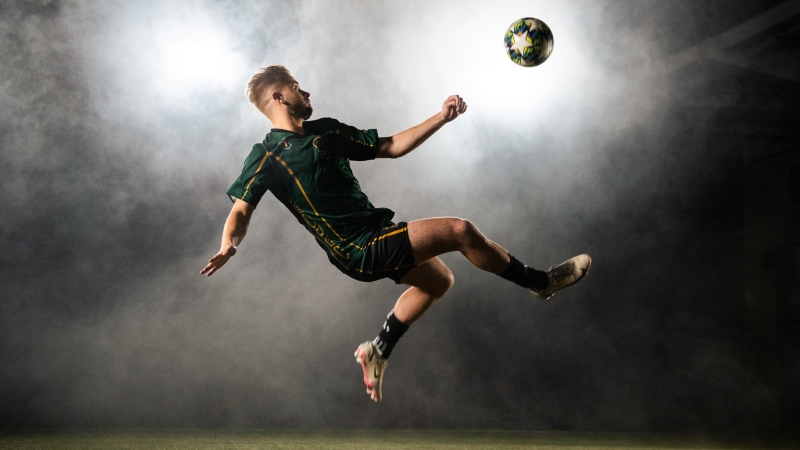 UNBC earned a handful of Council for Advancement and Support of Education awards for its UNBC Timberwolves Indigenous jersey project.

Designed by former UNBC student Trevor Angus, the new look turned heads on the pitch and the court. It also wowed the judges at the Council for Advancement and Support of Education (CASE), an international non-profit serving the communications, marketing, fundraising and alumni relations units at post-secondary institutions. The UNBC project earned a silver award in the storytelling category in the 2022 CASE Circle of Excellence Awards.

The judges praised the initiative for its creativity and integrated storytelling strategy. The project also earned kudos for the collaboration with Angus and the community involvement.

“The Indigenous Timberwolves’ logo and uniforms send powerful messages about the importance of representation, relationship-building and inclusion,” says UNBC President Dr. Geoff Payne. "Thank you to everyone who collaborated with us, shared their ideas and helped us make this initiative a resounding success."

In addition, the project earned recognition for the Best of CASE District VIII in both the Diversity, Equity and Inclusion category and the storytelling category. District VIII includes universities in Western Canada and the Pacific Northwest region of the United States.

UNBC unveiled the new logo and accompanying uniforms last fall at an event at Masich Place Stadium.  It marked the first time a Canadian college or university athletics department unveiled an alternate logo designed entirely by an Indigenous artist.

Angus took the Timberwolves’ wolf logo that has been used since 1998 and interpreted it to create a new design, as well as designing custom Indigenous piping that adorns the sides of the soccer and basketball uniforms. The artist also supplied UNBC with an additional wolf design that sits subtly beneath the main Timberwolf logo. In consultation with Lheidli T’enneh Chief and Council, the shorts feature syllabics that translate to “En Cha Huna,” while that very phrase sits across the back shoulders of every jersey. “En Cha Huna,” is UNBC’s motto, from Dakelh (Carrier) Elders, and is interpreted as “respecting all forms of life.”

The Timberwolves soccer and basketball teams wear the new uniforms as part of the annual Nats'ilnik games, which is the Dakelh word for “coming together.”

“I am so proud and thankful of the work that went into turning the concept of an Indigenous logo and uniform into a reality. It was so amazing to watch it come to fruition with Trevor Angus and then the creation of a uniform to showcase the art, the language and the motto of UNBC,” says UNBC Director of Athletics and Recreation Loralyn Murdoch. “To know that this was a positive collaborative project was and is inspiring.  This project has helped build new meaningful relationships and provided so many learnings that will continue to be built on.”

This is the third straight year the Timberwolves have won CASE awards.