When a camera installed by UNBC researcher Dr. Roy Rea discovered a moose on the Prince George airport property, it launched a collaboration between the Prince George Airport Authority and the University to save the animal while keeping airport operations safe. 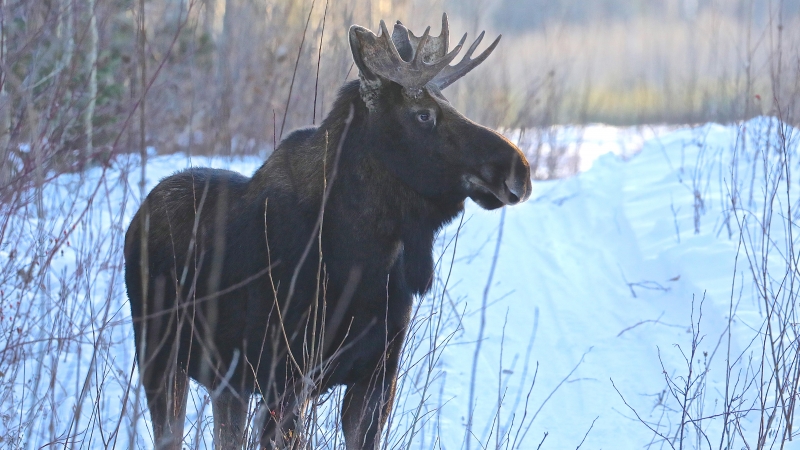 UNBC researchers and Prince George Airport Authority staff collaborated to get this moose to safety after it entered the airport's property.

When a healthy adult moose appears on a wildlife camera, it usually puts a smile on Dr. Roy Rea’s face. With a steady decline in their population, Rea knows that any moose that is capable of breeding is crucial to the long-term success of the species.

Yet, a recent image from one of Rea’s wildlife cameras set off alarm bells for the University of Northern British Columbia (UNBC) researcher. It was not how the moose looked that Rea found disconcerting. Rather, it was where the bull moose was located. The camera trap that took the picture is located on the airfield side of the security fence on the Prince George Airport Authority’s (PGAA) grounds.

“We knew right away this was something that should not be airside,” says Rea, a Senior Laboratory Instructor in the Ecosystem Science and Management Program. “A moose is certainly something we don’t want to have walk in front of an aircraft.”

UNBC and the PGAA have collaborated on a wildlife monitoring and research project since 2007. Beginning in 2009, Rea and his students set up cameras around the airport’s property and kept an eye on everything from coyotes to bears to lynx. However, a moose was a rare and alarming discovery.

When Rea’s cellular wildlife camera spotted the moose and sent an image immediately to his cell phone, he quickly contacted PGAA Manager of Operations Trevor Gust and they began to develop a plan.

The first priority was the safety of airport operations, but everyone also understood the ecological value of getting the adult bull moose out intact so it could support future population growth.

“Moose populations in this area are down 70 per cent and we’d rather like to see that animal survive and breed instead of being turned into hamburger,” Rea says.

The PGAA tried a number of tactics to get the moose to move out of the forested section of the airport property. First, they set up a one-way gate to give the moose an escape route, hoping the animal would leave on its own accord.

Yellowhead Helicopters helped by flying multiple times over the area where the moose was spotted, with the hope that it would encourage the animal to move on.

In the meantime, the team developed a plan in concert with Yellowhead Helicopters, the Conservation Officer Service and government moose biologists to tranquillize the moose and move it off the site. They also knew that if the moose became a safety threat they would have to euthanize it.

All the while, Rea and his team were keeping an eye on their cameras and the tracks in the snow left by the moose to determine the moose’s movements the best they could.

Once they found the exact location of the moose again, the PGAA and a group of provincial government employees sprang into action. They brought the airport fire trucks out, in case the moose started moving towards any runways they could use the sirens to scare it away. Then they hopped on quads and were able to gently move the moose out through an opening they created in the fence in the southwest corner of the grounds.

“It took a real team effort to ensure the moose was able to get out safely,” Gust says. 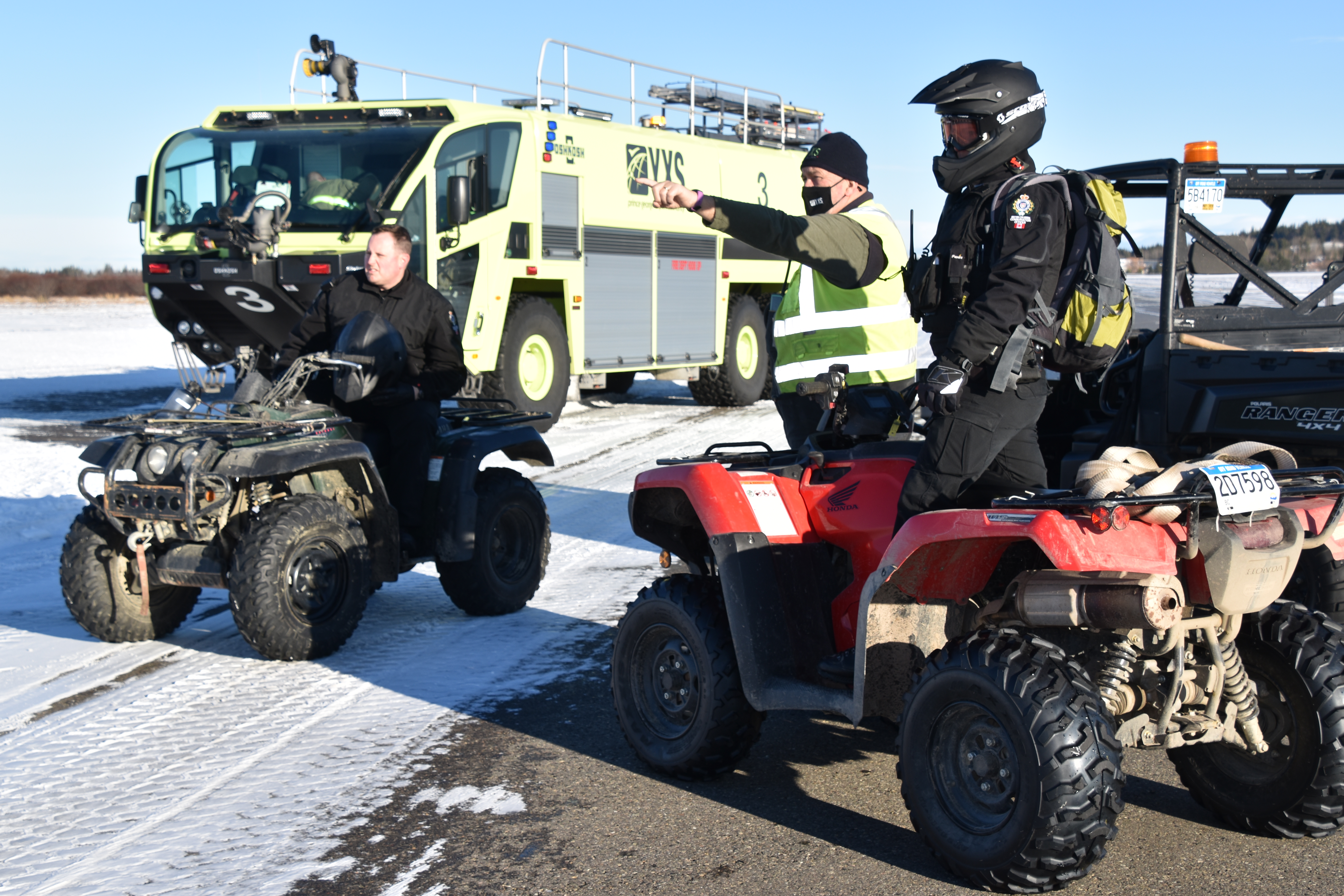 Staff from the Prince George Airport Authority, UNBC researchers and government moose biologists gather at the airport as they strategize about how to get a bull moose off the airport property.

The moose likely gained access to the airport in the first place through a gate that was left open in a storage compound. The PGAA is adding another level of fencing in that area to prevent another moose, or any other species of wildlife, from entering. Airport staff and Rea are now testing additional cellular cameras to add to the camera array.

Once it was on the grounds, the moose likely was not in a hurry to leave, because it had a nice patch of forest to itself.

“That section of forest is like a Garden of Eden for any moose that gets in there,” Rea says. “That area hasn't been browsed for years and years.”

Getting the moose out safely is only one part of the long-term partnership between UNBC and the Airport Authority. The wildlife monitoring agreement is unique for a post-secondary institution and an airport, and both groups see benefits.

“We have a wildlife program in place. There is a requirement that we are audited by Transport Canada to make to ensure that we're doing our due diligence where wildlife are concerned,” Gust says. “Having the University involved is a tremendous help because the researchers are able to do a lot of the leg work and then we are able to show Transport Canada all the work that has been done.”

The University benefits from both research and training perspectives. In 2017, Rea collaborated with the PGAA and other UNBC researchers including lead author Matthew Scheideman on a paper in the Journal of Airport Management titled Use of wildlife camera traps to aid in wildlife management planning at airports. Coincidently, Scheideman was the provincial government biologist called in to consult on ways of safely extracting the moose from the airport property.

“These long-term data sets allow us to really study the patterns of what animals are coming and going, at what time of day they visit the airport, and during what seasons of the year they are more likely to be on the airport property,” Rea says, noting he has another paper currently in press with another student trained on this project.

The PGAA also provides funding so UNBC students can gain valuable field experience. Students check the cameras, maintain the equipment, download and analyze photo and video data and look for areas along the fence where animals may be getting it.

“It’s a wonderful opportunity for students to work in the areas in which they're interested, like wildlife ecology,” Rea says. “They can take all of that information and put that data together in such a way that it can be used by the airport for their wildlife monitoring program as well as for publications to help other airports develop similar methods.”

Understanding how wildlife use airports helps the UNBC-Airport team keep both aircraft and animals - such as this bull moose - safer and in this case, keeps a breeding individual in a population that at this point in time is struggling.