As one of the first nurse practitioners in northern B.C., Shanda Rojas helped demonstrate the value they bring to the health-care system. Now as the UNBC graduate accepts a terminal diagnosis she is helping the next generation of Family Nurse Practitioner students. 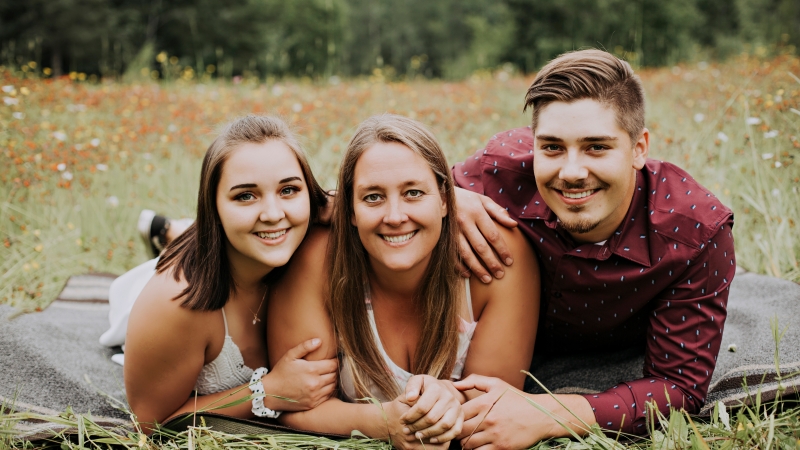 Shanda Rojas passed away on April 6, 2021. Before she died, Shanda shared her story, from her decision to become a nurse to her lifelong connection to UNBC to her terminal cancer diagnosis. She also created the Shanda Rojas Legacy Bursary to help future nurse practitioners access education at UNBC. Learn how to donate to the bursary

“I was perfectly set up to have a brain tumour at 48 because I had lived many lifetimes already. I never let my moss grow under my feet.”

She never let an opportunity pass by unexplored.

As a loving mother, a trailblazing nurse practitioner, a thoughtful educator and a creative entrepreneur she has made a profound contribution to the lives of many in her hometown of Quesnel and across northern British Columbia. Now, as she enters the final chapter of what has been a remarkable life, she continues to support the next generation of health-care providers.

“The running joke in the office was that I was an Energizer bunny, I was always go, go go,” Rojas says. “I’m really glad that I made good use of my time.”

Unhappy in her career, Rojas twice took a chance on furthering her education. Widowed with a two-week-old daughter and three-year-old son, Rojas found the strength to raise her children and excel in her work.

Recognizing a need and an opportunity, Rojas set up her own nurse practitioner business so she could become the primary care provider for five First Nations communities in the central interior.

Diagnosed with a terminal disease at a young age, Rojas realized she could continue to give back for years to come by creating the Shanda Rojas Legacy Bursary at the University of Northern British Columbia.

“I saw the change that UNBC brought to these rural and northern communities.”

Her journey intersected with UNBC many times, as a student, a faculty member and a donor. But, if not for serendipitous timing early in her career, Rojas’ life may have taken a completely different path.

At 17, Rojas began studying for a diploma in nursing from the College of New Caledonia. At the time, she was looking for a steady paycheque, a career that would allow her time to start a family and a job where she could help others. This was the early 1990s and at the time diploma programs were the only options for nurses who wanted to train close to home in the north.

After graduation, Rojas began working, but she didn’t immediately discover her passion for nursing. Two years into her career, she was growing frustrated with the job and the working conditions. She was ready for a change and she began to explore the idea of going to law school.

“Then, interestingly enough, UNBC opened in 1994,” Rojas recalls. “My mom applied on my behalf and I got an acceptance letter. I thought, ‘I’m not into law school yet, so I might as well go and get my degree.’ ”

She entered a bridging program for nurses looking to upgrade to a Bachelor of Science Nursing degree and two-and-half-years later became one of the few nurses with a degree in Quesnel.

“Getting my degree changed everything, it opened doors I didn’t even know existed,” Rojas says. “After I got my degree my career rocketed.”

With her degree, Rojas explored different areas of community nursing with Northern Health, including pregnancy outreach and public health nursing.

She also married Eric Rojas and they started a family together. Just as she had hoped, nursing gave her the chance to balance her work life while still leaving lots of time for her to be a parent.

“I was able to float between jobs and pick my own hours and still raise my kids,” Rojas says. “My husband also worked part-time and we really enjoyed the northern life. We liked that it was so affordable, which gave us the ability to appreciate it.”

“Having my degree when that happened was instrumental because it meant I could still get paid well,” she says. “I was able to pop in and out of jobs and it worked out well for our family.”

One of the jobs she picked up at that time was a teaching position with UNBC, where she taught undergraduate nursing students at the South-Central campus in Quesnel.

“When providing care, you have to meet people where they're at and give them all the information they need to make the choices that are better for their lives as opposed to telling them what's the best for their lives.”

As Rojas regained her footing after her husband’s death, she realized she was ready for her next challenge. What started as taking a few courses to fill her evenings turned into an entirely new career path.

“I think I was in the first or second cohort at UVic,” Rojas says. “They were looking for people, I fit the criteria and it kept me busy in the evenings when I had to put the kids to bed.”

The program rekindled her passion for nursing and it eventually gave her the chance to merge her health-care skills with her entrepreneurial passion and her desire to help future nurse practitioners.

“I was going from a nursing role where I was completely controlled to one where I am not controlled anymore, where I make the decisions,” Rojas says.

As one of the first nurse practitioners working in the north, Rojas was on the front lines as nurse practitioners found their place in the health-care system. She quickly realized that it was important for her to engage in the full scope of practice.

“The health-care system didn’t know what to do with us,” Rojas says. “I felt like it was very important that I pushed myself clinically, even if I felt uncomfortable.”

As Rojas gained crucial experience working as a nurse practitioner for Northern Health, she saw an opportunity. She realized her knowledge and skills could benefit people living in remote Indigenous communities.

Ever the entrepreneur, she set up her own practice in 2010 and worked directly with five First Nations to become the primary care provider in their communities.

For nearly a decade, she travelled from community to community to provide whatever health-care service was required and built relationships with her clients along the way. Her philosophy was always to give patients the best possible information, but let them make their own decisions about the care they did or did not want to receive.

“When you’re in a remote community, you do what needs to be done,” Rojas says. “Sometimes I did nursing work, sometimes it was nurse practitioner work and sometimes it was health care aide work.”

When Rojas wasn’t caring for her clients, she was helping to train future nurse practitioners. As an Adjunct Professor at UNBC’s School of Nursing, Rojas travelled across the north to evaluate students as they completed their practicum placements.

The job gave her the chance to see first-hand the impact that nursing students and existing nurse practitioners are making in communities of all sizes across British Columbia.

“Shanda brought a wealth of knowledge in her guest lecturing and also provided a perspective of a nurse practitioner as a private contractor,” says UNBC nursing instructor Ginny Burns. “She is very passionate about Indigenous health and she shared that passion with the students.”

Rojas was always amazed at the opportunities available in the north, where students and nurse practitioners have the chance to experience the full range of primary care duties. Often in larger centres, health-care providers are more specialized.

“What stands out to me is how adaptable these northern sites and communities are to what is coming at them,” Rojas says. “The north is just so much further ahead in primary health care.”

“I don't feel like I’m dying. It is so hard to be told that my tumour has come back, that it has gotten to be the size that it is and that there is likely not much more room left in there.”

In May 2019, Rojas received horrifying news. Brain cancer was going to cut her life short. It was a devastating diagnosis. Suddenly, everything she had worked toward stopped.

Rojas says her children, who are now young adults, Mateo and Carmen stepped up to help her get everything in order.

“I have wonderful children. I raised them really well and I raised them to be independent early,” she says.  “I don't know if I could have done it without them.”

The trio worked to wind down her nurse practitioner’s business and liquidated her burgeoning real estate portfolio–one month before her diagnosis she had just purchased her first four-plex.

As news of her disease began to spread, UNBC Nursing Assistant Professor Dr. Erin Wilson and part-time faculty member Ginny Burns approached Rojas about starting a student award named in her honour. Rojas loved the idea so much she decided to donate enough funds to create an endowed award and was able to help define the criteria.

The Shanda Rojas Legacy Bursary provides a $1,000 award annually to a full- or part-time student in the Family Nurse Practitioner program.

“I hope future nurse practitioner students can use the award to make best use of their skills and experience to feel prepared to stay in northern B.C. and deliver excellent primary health care to their communities,” Wilson says.

Preference is given to students who are widowed or single parents as well as students who express a desire to work with marginalized populations.

“I was that struggling person when I was doing my degree and my kids were little,” Rojas says. “I was the one looking for bursaries and trying to find money, but still trying to stay home with my family.”
The choices we make, the adversity we overcome and the people we lift up define who we are.

Shanda Rojas chose a career in nursing because she wanted to help others. She overcame unimaginable personal and professional challenges along the way. But the people she helped will never forget her dedication to caregiving. And through the Legacy Fund, an entirely new generation of nurse practitioners will benefit from the trail she blazed.

“Shanda’s innovative, hard-working nature and commitment to learning new things and providing high-quality health care makes her unforgettable,” Wilson says. “The spirit of this award is to recognize others who embody such qualities can help future students get the start they need to launch themselves into a fulfilling career.”

To donate to the bursary, visit our online Giving page and follow these steps