John S. MacDonald, the fifth Chancellor of the University of Northern British Columbia, died on Boxing Day at the age of 83. 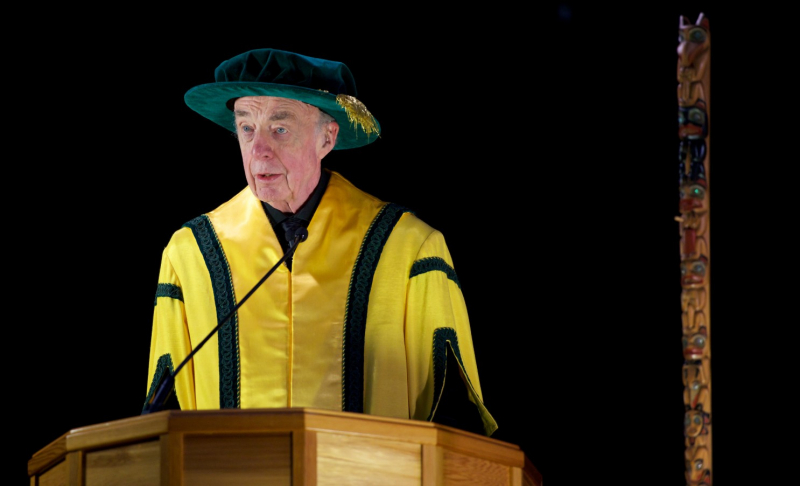 John MacDonald, who served two terms as UNBC Chancellor, died at the age of 83.

John S. MacDonald, the fifth Chancellor of the University of Northern British Columbia, died on Boxing Day at the age of 83.

MacDonald was born in Prince Rupert in 1936 where he honed his scientific curiosity by repairing radios on fishing boats.

“John MacDonald’s passion for discovery was evident throughout his career as an educator, engineer and entrepreneur,” says UNBC President Dr. Daniel Weeks. “As a northerner, he understood the important role UNBC plays in advancing knowledge and educating future leaders. During his six-year tenure as Chancellor, he provided outstanding service to the University.
“On behalf of the entire UNBC family, I offer condolences to his family.”

MacDonald was installed as UNBC Chancellor on May 28, 2010 and served two three-year terms.

He earned a Bachelor of Applied Science in Engineering at the University of British Columbia in 1959. He completed his graduate studies at the Massachusetts Institute of Technology with a Master’s of Electrical Engineering in 1961 and a PhD in 1964. He was a faculty member at both MIT and UBC in the 1960s and 1970s before beginning his career as a high tech entrepreneur.

In 1969, MacDonald and Werner Dettwiler co-founded Vancouver-based space technology company MacDonald, Dettwiler and Associates in MacDonald’s basement. The company grew to become one of Canada’s leading high technology companies, working on projects ranging from the robotic Canadarm used during Space Shuttle missions to satellite-mapping techniques. MacDonald served as CEO and Chair of MDA, retiring from the company in 1998. He also founded green technology startup Day4 Energy in 2001.

MacDonald was named an Officer of the Order of Canada in 1988.

The Chancellor is the ceremonial head of the University and a primary duty is granting degrees at annual Convocation ceremonies.