UNBC Anthropology professor Dr. Michel Bouchard is one of the authors who contributed to the book Les Bois-Brûlés de l’Outaouais 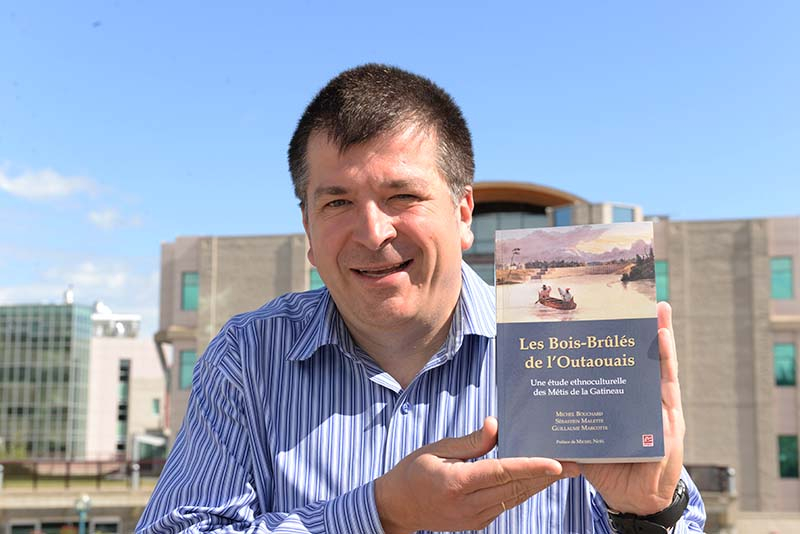 No Métis community has been yet officially recognized in Québec. The book, Les Bois-Brûlés de l’Outaouais, attests nonetheless that there is a historical Métis community to the north of Ottawa.

This innovative research presents a detailed case-study of a region that was described as a “frontier” and qualified as “Indian Country” until the mid-19th century. The Métis community of the Gatineau Region of western Québec shares with the historical Métis community of Mattawa and Timiskaming cultural and kinship ties. One of the families even seems to have had an ancestor, François Beaulieu, who accompanied Alexander Mackenzie to the Pacific Coast of British Columbia.

This book demonstrates through a rich documentary that a regional Métis culture and community formed in the valleys of the Gatineau and the Lièvre, a community fully integrated within a Métis Diaspora that is found from East to West across the North American continent.

“Through a detailed analysis of unpublished sources, we demonstrate that the ‘freemen’ of the fur trade, as well as their spouses and children, constituted a core of families that would soon form a historical Métis community in western Québec,” explains Dr. Michel Bouchard, one of the authors who is a Professor of Anthropology at the University of Northern British Columbia.

The content of the book may surprise many. Historically, the history of the Ottawa region is known for forestry, while the Métis are invariably depicted as bison hunters in the western prairies.

“The book Les Bois-Brûlés de l’Outaouais calls into question the historical stereotypes related to both the Métis as well as the colonization of the territory,” adds author Sébastien Malette, an Assistant Professor of Law and Legal Studies at Carleton University. “We find Louis Riel who is reputed to have spent some time in the area as he is pursued by bounty hunters during his exile after the resistance of 1869-70 which led to the creation of the province of Manitoba. The local oral history testifies to the fact that he found refuge among these Métis families of western Québec.”

“The Métis of the Outaouais came into existence in the era of the fur trade, when French-Canadian and Scottish traders took as wives indigenous women while continuing to pursue trade whether as employees of the fur trade companies or in competition with these very same companies, notably the Hudson’s Bay Company,” attests the author Guillaume Marcotte. “They forged a life in trading, often clandestinely, or in working for forestry companies or as guides and interpreters, but always as Métis.”

Les Bois-Brûlés de l’Outaouais is the history of a resilient community that remained outside the preoccupations of university research, but that has been fighting for its rights and recognition since the end of the 1960s. It is seeking recognition as an indigenous population within Québec and Canada.