Our students, faculty, alumni and staff are making headlines for their work on campus. 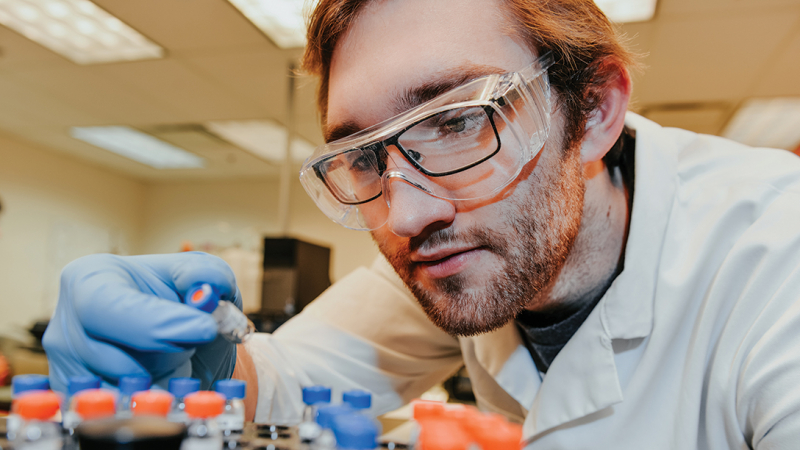 Graduate student Lon Kerr is conducting research into how zeolites can be used to purify water.

Kerr, whose research is supported by Mitacs, takes zeolite samples from the International Zeolite’s Bromley Creek Quarry near Princeton, B.C., washes them with deionized water and treats them with a sodium-chloride solution to remove water-soluble impurities and make a sodium-form zeolite. The purified sample is soaked in a zinc solution.

Tests confirm that zinc-modified zeolite is capable of killing 100 per cent of bacteria. Just 0.1 grams of product can reduce the cell count of bacteria-contaminated water by over two thousand per hundred millilitres, in under an hour of exposure.

“According to World Health Organization reports, by 2025, 50 per cent of the world’s population will live in water-stressed regions and at least two billion people will be drinking water from sources contaminated with bacteria generated by feces,” says Kerr. “These numbers show the importance of our research in developing an inexpensive, yet very effective compound for water purification, particularly for underdeveloped countries. In some cases, floods, earthquakes and other events can damage or destroy existing water treatment systems in developed communities. Zeolites are a solution for disaster that can be prepared in advanced and stored long term.”

Once again, UNBC continues to shine on the Canadian post-secondary landscape.

Maclean’s Magazine released its annual university rankings this fall, and UNBC placed second in its category, the sixth consecutive year the University placed in the top two and its 12th straight year in the top three.

This year, UNBC ranked first in two categories and second in another. The first-place results are in the number of students who have won national awards, and operating budget (the funding UNBC provides on a per-student basis). UNBC placed second in the category that evaluates student-to-faculty ratio.

UNBC continued to make gains in the national reputational rankings, in which Maclean’s surveys “university faculty and senior administrators, high school guidance counsellors and a variety of business people across the country, asking for their views on quality and innovation at Canadian universities.” UNBC jumped three to five spots in multiple categories, in some cases passing by much larger, better-known institutions.

UNBC continued to show well in the student survey rankings as well. Most notably, the University placed first in the category related to the promotion and visibility of Indigenous history, culture and language on campus.

In addition, the Times Higher Education World University Rankings placed UNBC among the top five per cent of universities in the world for the third straight year.
UNBC saw steady growth in each of the five categories Times Higher Education considers. The biggest jump came in citations, used to measure the influence research conducted at UNBC is having at other institutions around the world.

Whether as a backdrop for grad photos or a place to go for a quiet lunch, the David Douglas Botanical Garden is a jewel of the Prince George campus. Now the society that operates the garden is launching a new phase with a grand vision for a second garden to enhance research in botany, horticulture and arboriculture.

UNBC is committing 11 hectares (23 acres) of land located south of the residence buildings and west of the Charles Jago Northern Sport Centre, for the sub-boreal forest garden.

Once complete, the garden will include a visitors’ centre with a classroom, botanical library and reception hall. Outside there will be a research garden for UNBC faculty and students, themed ornamental display gardens, a wetland area with viewing platforms and an Indigenous garden developed in partnership with local First Nations. There will also be a featured pathway with overhead arbours and trellises.

Anthropology Professor Dr. Michel Bouchard co-authored a book that sheds new light on the yet-unrecognized Métis community in the Outaouais region in western Québec. Along with Sébastien Malette (Carleton) and Guillaume Marcotte (independent researcher), Bouchard explores the history of a resilient community that remained outside the preoccupations of university research, but that has been fighting for its rights and recognition since the 1960s.

Les Bois-Brûlés de l’Outaouais is currently available in French. An English-language version, titled Bois-Brûlés: The Untold Story of the Métis of Western Québec, is set for release later this year.

From two colleges to five faculties, the academic structure of UNBC is changing.

For two decades, the university’s academic units have been divided between the College of Science and Management and the College of Arts, Social and Health Sciences. After an extensive consultation process, UNBC is restructuring into a new academic model.

The new faculties are Environment; Human and Health Sciences; Business and Economics; Indigenous Studies, Social Sciences and Humanities; and Science and Engineering.

The new structure will foster innovation, creativity and interdisciplinary dialogue.