We are making 1,000 origami ravens and learning about Truth and Reconciliation. 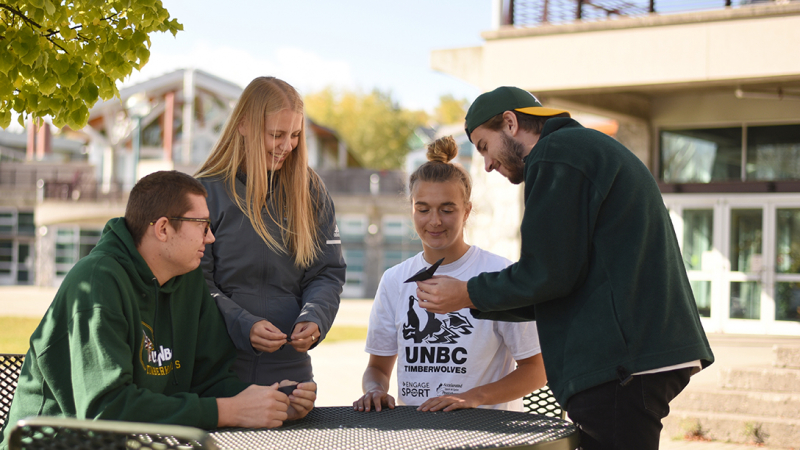 UNBC students fold ravens for the 1,000 Ravens for Reconciliation project.

Folding a small square of black origami paper isn’t as easy as it seems.

Even as one watches a video along with help from UNBC First Nations Centre staff, knowing that the end result is supposed to be a tiny raven, complete with a head, beak, tail, wings, legs and feet—most become frustrated halfway through the process.

But that’s the whole point behind making a raven and the 1,000 Ravens for Reconciliation campaign, explains Bev Best, Manager of Aboriginal Student Engagement.

“The building of each raven is not an easy task, but the process of reconciliation is not easy either. Know that the end result will be beautiful both in the wish and the ravens,” she explains.

UNBC launched the 1,000 Ravens for Reconciliation project in September to engage the University community in learning more about what reconciliation means.

In partnership with the First Nations Centre, the goal is for members of the University community to make 1,000 origami Ravens this year to symbolize a University-wide wish for reconciliation.

The raven is an important symbol, considered a trickster that inadvertently teaches us life lessons. In a creation story, the raven stole the sun and brought light to a dark world, and will now help us bring light to reconciliation.

Students, faculty and staff will have ample opportunity to make the ravens throughout the year in the Gathering Place. Best leads the raven-making sessions, which include a talk about the importance of reconciliation, followed by a short instructional video.

Once created, the ravens are displayed prominently around campus, celebrating those who have made a personal and professional commitment to reconciliation.

For students who had the opportunity to make their ravens in the Gathering Place, they too became frustrated, but realized it was all part of learning about reconciliation.