UNBC researchers Dr. Phil Owens and Dr. Ellen Petticrew have spent eight years monitoring the environment after the Mount Polley mine tailings pond breach. In their latest paper, they show that every year when Quesnel Lake turns over copper-rich sediment is re-suspended in the water column and is sent down the Quesnel River. 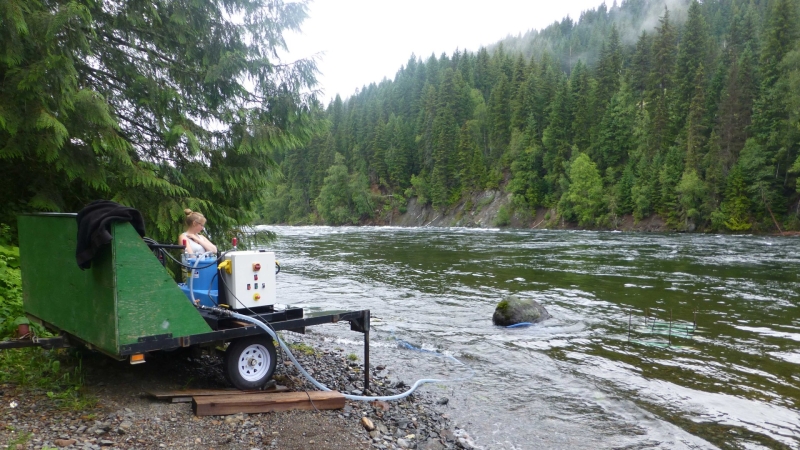 Researchers set up sites along the Quesnel River to monitor sediment levels after the tailings pond spill at the Mount Polley mine in 2014.

Every winter since the tailings pond breach at the Mount Polley mine in 2014, copper-laden sediment from the bottom of Quesnel Lake has been re-suspended in the water column and has flowed into the Quesnel River affecting aquatic life in the watershed, according to a new paper by UNBC researchers Dr. Phil Owens and Dr. Ellen Petticrew.

Lakes turnover every year when the temperature changes, with water from the bottom of the lake rising and water closer to the surface moving to the bottom. This process lifts the copper-rich mine tailings and other sedimentary material from the bottom of the lake and the current takes it downstream to the Quesnel River, a tributary of the Fraser River. Published in the journal Science of the Total Environment, the paper details how this process results in seasonal copper levels in the Quesnel River that at times exceed federal guidelines for the protection of aquatic life.

The paper titled Annual pulses of copper-enriched sediment in a North American river downstream of a large lake following the catastrophic failure of a mine tailings storage facility includes co-authors from the University of British Columbia, Fisheries and Oceans Canada and other UNBC researchers.

The tailings facility at the Mount Polley copper and gold mine failed on Aug. 4, 2014, sending 25 million cubic metres of solids and water from the mine site into the local environment. Most of the material went down a small creek and into Quesnel Lake, the third deepest lake in North America and an important lake for Pacific salmon. The fact that the material ended up in a large lake is unique, most other major mining spills have ended up in rivers. In the paper, Owens and Petticrew examine how the lake may initially buffer the downstream effects of the spill but are likely to prolong the environmental impact.

“These findings are important because one might expect the tailings to remain at the bottom of the lake, but this work shows that the physical dynamics of lakes can mobilize this material, thereby delivering contaminated sediment to downstream river ecosystems. In the Quesnel watershed, we have measured this effect for at least seven years after the spill occurred,” said Owens, an Environmental Science Professor in the Department of Geography, Earth and Environmental Sciences.

The research team tested the water and sediment at four sites using three different techniques over seven years, beginning shortly after the incident in 2014.

“Sampling of the lower levels of the food web indicate increased uptake of metals in the area of the initial deposit.  Elevated concentrations in these organisms, including biofilm, phytoplankton, zooplankton and benthic invertebrates, which provide food for resident fish are also detected further afield due to the movement of the contaminated fine sediment,” said Petticrew, a Geography Professor in the Department of Geography, Earth and Environmental Sciences. “The copper concentrations are highest from samples collected from November through May as this period captures both the winter and spring overturns of the lake when the bottom sediment is re-suspended and available to organisms.”

Owens, Petticrew and colleagues have spent the past eight years studying the impact of the tailings pond spill. They released their initial findings two months after the breach, published their first paper less than a year later, and have continued to collaborate on other studies looking at the short- and long-term impact of the spill on the environment.

The next phase of research includes examining how the metals and phosphorus released during the spill continue to affect the lower levels of the food web, as well as investigating how diffuser pipes, that were introduced into the lake after the spill to deal with excess water on the mine site, affect the water quality and food web of the lake.

Funding from the Government of Canada’s Environmental Damages Fund helped support the research.