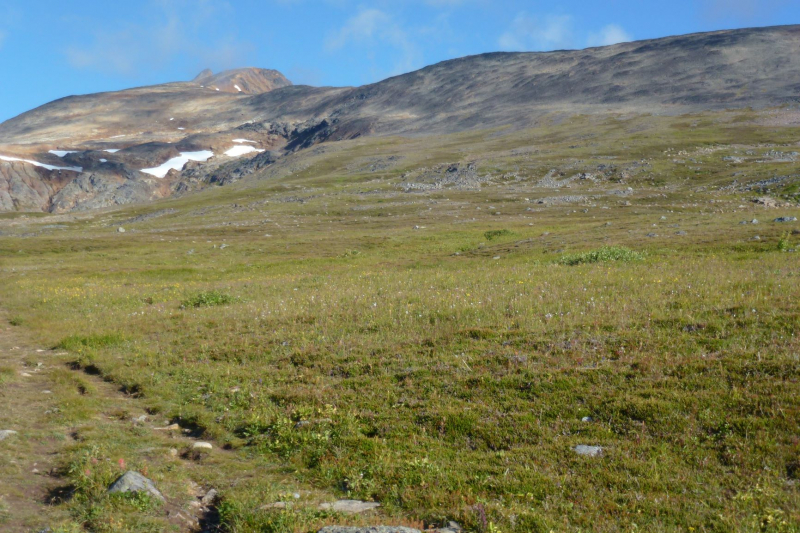 Hudson Bay Mountain near Smithers, B.C. was a research site for a study that examines the interactions between plant and animal species in the Americas.

A new study released this month reveals interactions such as predation and competition between plant and animal species are much stronger in tropical regions and lower elevations. Some of the experiments in the report were conducted near Smithers by UNBC Adjunct professor Dr. Sybille Haeussler.

The study, “Seed predation increases from the Arctic to the equator and from high to low elevations,” was published on Feb. 20 in the online journal, Science Advances, http://advances.sciencemag.org/content/5/2/eaau4403

The experiment involved researchers from 13 institutions across the Americas and deployed 7,000 seed depots distributed across a huge geographical area, with 79 sites spread out over 18 elevational transects, each replicated three to six times, stretching from Alaska to the equator. The sheer scale of the research makes it by far the largest field experiment ever conducted on this subject. Until recently, evidence for this key ecological theory was inconclusive and came from small-scale studies that used various methods.

This new evidence supports a key Darwinian hypothesis – that biotic interactions between species will increase at lower latitudes and elevations. Some of that evidence comes from Hudson Bay Mountain, near Smithers.

The international research team was led by McGill University’s Anna Hargreaves, and used a simple experiment that mimics how plants and animals interact with each other — leaving seeds out for 24 hours to see how many get eaten.

“Theory predicts that interactions among species — like predation and competition — will be strongest in the warm, productive, biodiverse ecosystems of the tropics and low elevations,” says Hargreaves, an evolutionary ecologist in McGill’s Department of Biology. “For example, the spectacular diversity of tropical trees is thought to result partly from stronger interactions between plants and the animals that prey on their seeds, which shapes how and where plants grow and adapt.”

Using consistent methods and seeds from the Arctic to equator, this new study shows that seed predation increased by 17 per cent from the Arctic to the Equator, and by 17 per cent from 4,000 metres high in the Andes down to sea level. The research team replicated the 24-hour experiment several times during each latitude’s natural seed-producing period.

In Northern B.C., Dr. Haeussler set up a transect with five sites extending from Highway 16 (477 m elevation) to the rocky alpine tundra above the Smithers ski resort (1,900 m elevation). Together with Bulkley Valley biologist and researcher Kerrith McKay, Haeussler has run the experiment twice each year since 2015.

“Biotic interactions like those between plant seeds and seed-eating animals form the basis of the complex ecosystems that support human life on earth,” says Haeussler, a community-based research scientist stationed at the Bulkley Valley Research Centre in Smithers. “It is essential that we better understand global patterns in these key interactions, given the enormous task of managing and restoring ecosystems under stress from human population growth and climate change."

The researchers are now extending the project to mountains with different climates and ecosystems at the same latitudes, to test what drives stronger interactions.