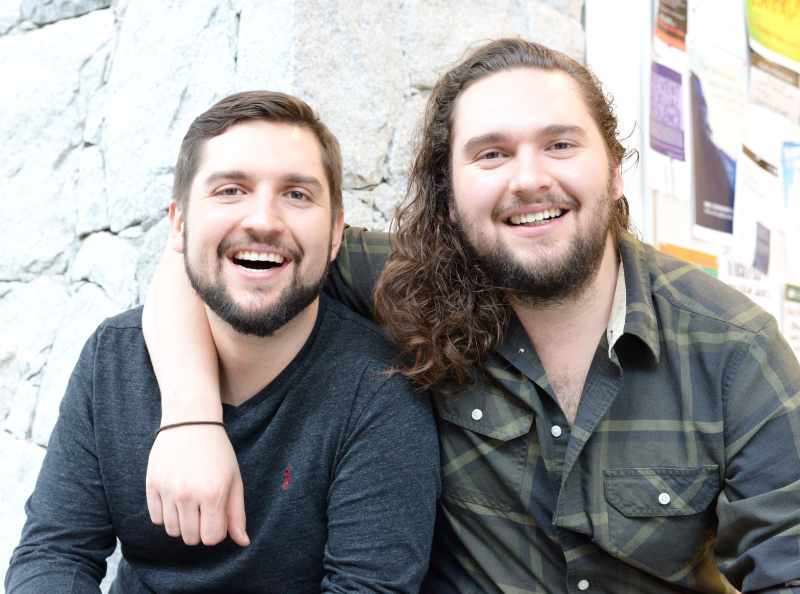 Brothers Corbin (left) and Spencer Greening are both UNBC graduates who share a passion for education. They shared their stories as part of the Aboriginal Alumni Speaker Series .

Brothers Corbin and Spencer Greening share a unique connection between education and community.

For Corbin, his graduate degree was a chance to reconnect with Lake Babine First Nation and the people his mother introduced him to as a youth.

For Spencer, going to UNBC and the knowledge he gained allowed him work and live in two worlds, that of academia and the other of reconnecting with the land and Elders of his traditional territory.

The Greening brothers returned to campus this week as the featured guests at Friday’s Aboriginal Alumni Speaker Series.

After graduating from UNBC, Corbin moved to Prince Rupert and Hartley Bay to work as a Treaty analyst with Gitga’at First Nation, of which he is a member. With a keen interest in traditional Ts’msyen governance, land tenure and Aboriginal rights, Corbin became invested in his Nation. During his work, Gitga’at Aboriginal rights were faced with new challenges from commercial and industrial development, but the Nation lacked the legal resources.

Community leaders encouraged Corbin to study law and he is currently in the midst of his first year of his law degree at the University of Victoria.

Spencer followed Corbin to Prince Rupert and the Gitga’at First Nation and worked in various departments including environmental assessment and eventually led cultural research projects. He even ran for and won a Council seat within the Nation, a position that ended in December.

Spencer is currently a PhD candidate at Simon Fraser University. His research revolves around his deep connection to his home community, elders, territories, and the self-determination and decolonization of Indigenous peoples. His research interests are Indigenous knowledge systems, language, identity and traditional Gitga’at law and politics.