Kady Dandeneau made a name for herself as a star player for UNBC's women's basketball team. She later switched to wheelchair basketball. In 2019, she played a major role in leading Canada to a gold medal at the Parapan American Games. She returns to Prince George on March 11 as the keynote speaker for the 6th annual Timberwolves Legacy Breakfast. 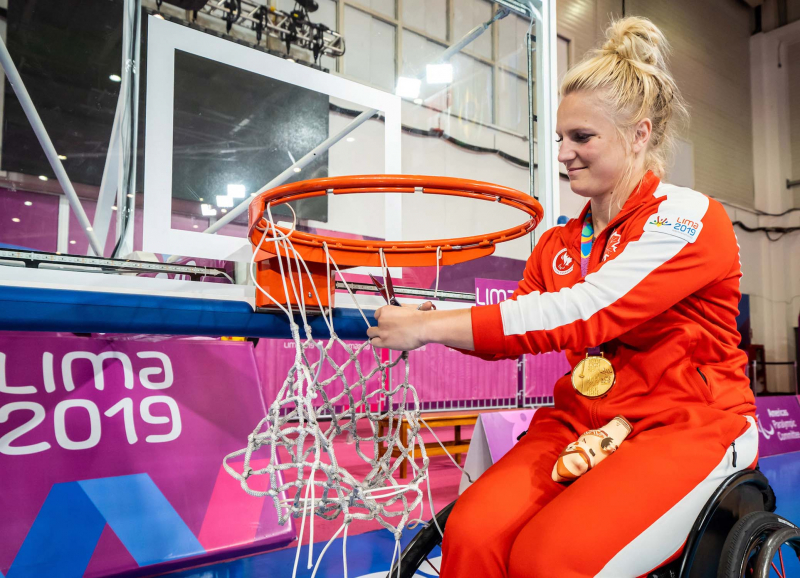 Prince George, B.C. – She was one of the best athletes to ever don a UNBC jersey, and now she is perhaps the greatest wheelchair basketball player in the entire world. On March 11, 2020, Kady Dandeneau will return to Prince George at the Courtyard, by Marriott Hotel as the keynote speaker for the 6th Annual University of Northern British Columbia Timberwolves Legacy Breakfast, sharing her story of triumph through adversity.

“Welcoming Kady back to UNBC to speak at our 6th Annual Legacy Breakfast is incredibly exciting,” said Loralyn Murdoch, UNBC’s Director of Athletics and Recreation. “She has an incredible passion for the game, and an unwavering desire to compete, in the face of the adversity she has overcome. This is a story I can’t wait to hear, and I believe everyone in attendance will truly enjoy.”

A UNBC Women’s basketball player from 2007 to 2013, Dandeneau established herself as a fan favourite with her talent and immense competitiveness. However, a terrible sequence of injuries on the court led to the eventual end of her stand-up basketball career. She concluded her Timberwolves career as a two-time BCCAA Provincial Champion, two-time BCCAA All-Star, and All-Star at the National level, but her premature exit from the game she loved left a gaping hole in her life.

In 2015, Dandeneau tried her hand at wheelchair basketball, and soon after she was a part of Wheelchair Basketball Canada’s National Development program. She quickly climbed the ranks, cracking Team Canada in 2017, and has established herself as one of the premier players of the sport on the planet.

In 2019, Dandeneau led Canada to a gold medal at the Parapan American Games, finishing first or second for the Canadians in points, rebounds, assists, blocks, steals, and field goal percentage. In the gold medal game, the former Timberwolf recorded 25 points, 10 rebounds, and 10 assists, becoming the first player in Canadian Wheelchair Basketball history to record a triple double. With the victory, Dandeneau and her teammates will represent our country at the Paralympics in Tokyo in 2020.

Recognized by teammates and coaches for her incredible will and determination, Dandeneau will tell her inspiring story of overcoming obstacles, finding her path, and triumphing through adversity.

“During her time at UNBC, Kady was known as the ultimate competitor, but she was also recognized for her community involvement and commitment to making a name for the Timberwolves and UNBC,” said Murdoch. “It is incredibly special to welcome her back for a morning that no one will soon forget.”

Tickets are $90 for an individual seat, or $720 for a table of eight. Other ticketing options are also available. The doors open at 6:30 a.m. and the breakfast begins at 7 a.m.