A new partnership between UNBC and the University of Central Asia paves the way for increased student exchanges and research collaborations. 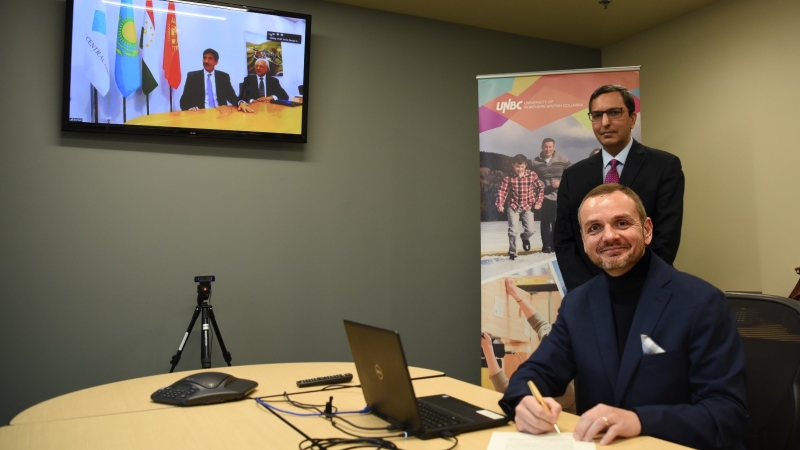 The University of Northern British Columbia and the University of Central Asia (UCA) signed a memorandum of understanding (MoU) to facilitate student and faculty exchanges between the two institutions and increased opportunities to collaborate on joint research projects.

“This agreement with the University of Central Asia will facilitate teaching and research collaborations and allow for student exchanges,” Payne says. “We are fortunate to have graduate students from UCA join us already at UNBC and we are benefiting from the knowledge they have shared as they continue their studies here. We are looking forward to advancing this partnership with both UCA and the Aga Khan Development Network.”

The UCA, established in 2000, is an international educational institution established by a treaty signed between the Republic of Tajikistan, The Kyrgyz Republic, the Republic of Kazakhstan and the Ismaili Imamat. Its mission is to promote the social and economic development of mountain communities, which seeks to contribute leadership, ideas, and innovations to the transitioning economies and communities of the region through educational and vigorous research programs that produce knowledgeable, skilled, and creative graduates.

The UCA is part of the Aga Khan Development Network (AKDN), a group of private, international, non-denominational development agencies working to improve the welfare and prospects of people in the developing world, particularly in Asia and Africa. This agreement will help facilitate further engagement between UNBC and other AKDN agencies.

“The MoU with UNBC will open doors of opportunities for young and brilliant minds from the Central Asian region. There is no doubt that this region is a treasure trove of knowledge and research opportunities, and UCA is playing a key role in building bridges between Central Asia and the world,” Naqvi says.

The connections between the two institutions pre-date the agreement. Rahim Somani, who joined UNBC in November 2020 as Vice-President, Finance and Administration, spent 12 years at UCA where he played a critical role in planning and developing a multi-campus university and provided leadership and oversight to the Finance Division and university operations.