Dr. Stephen Déry is the new NSERC/Rio Tinto Senior Industrial Research Chair in Climate Change and Water Security. The $1.5 million in research funding will allow Déry to to better understand the impacts of climate change and human activity on the long-term water security of the Nechako watershed. 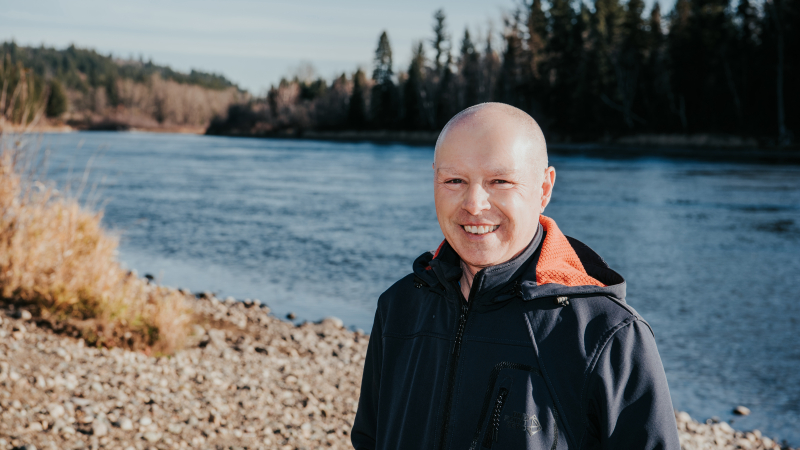 NSERC/Rio Tinto Senior Industrial Research Chair in Climate Change and Water Security Dr. Stephen Déry will use $1.5 million in new research funding to examine the effects climate change is having on the Nechako River watershed.

The $1.5 million in research funding from NSERC and Rio Tinto will allow Déry, an expert on climate variability and climate change, to quantify their roles and the role of  water management on the Nechako River basin’s water supply.

Industrial Research Chairs facilitate research collaborations between universities and partners in the private or public sectors, which result in economic, social and/or environmental benefits.

“This five-year program of research builds on the capacity my research group has developed over the past 15 years and will make use of the latest technology and state-of-the-art numerical models in advancing our knowledge on the impacts of climate change on water security in the Nechako watershed,” says Déry. “It is important to collaborate with a private sector partner such as Rio Tinto, with a view to seeing our research findings applied to help manage the environmental impacts of industrial activity.”

The objective of this Industrial Research Chair is to better understand the impacts of climate change and human activity on the long-term water security of the Nechako watershed. Water is of primary importance for the day-to-day operation of Rio Tinto’s aluminum smelter in Kitimat, B.C., while at the same time it is also critical for the wellbeing of the ecosystem. An expanded program of research and monitoring in the Nechako River Basin remains a top priority for its communities and Rio Tinto.

“This partnership will build on Rio Tinto’s long standing support for the UNBC and commitment to managing the Nechako watershed responsibly,” said Rio Tinto BC Works general manager Affonso Bizon. “We share UNBC’s commitment to advancing education and research in the region, and look forward to seeing the findings from this work to build on our environmental management program for the Nechako.”

The funding from NSERC and Rio Tinto, will also support 13 students, ranging from doctoral candidates and post-doctoral fellows, to master’s students and senior undergraduate researchers.

“Dr. Stephen Déry’s research into the consequences of climate change on the water cycle in the north is of upmost importance to Canadians and is an ideal fit for UNBC’s first Industrial Research Chair,” says UNBC President Dr. Daniel Weeks. “This collaboration between NSERC, Rio Tinto and UNBC will create knowledge around the future of the Nechako River and will contribute to the ongoing global climate conversation.”

There are three main themes for the research that will be delivered through the funding from NSERC and Rio Tinto.
• Hydrometeorological monitoring and data collection;
• Atmospheric and terrestrial rivers; and
• Hydrological and water temperature modeling.

Some examples of specific research projects include expanding the number of hydrometeorological research stations in the Nechako River basin, monitoring the terrestrial impact of atmospheric rivers (a long band of moisture plumes that often result in heavy precipitation events, colloquially known as Pineapple Express storms) and projecting the future hydrology and water temperatures of the Nechako watershed.

This project is supported by the Research Support Fund, a tri-agency initiative of the Social Sciences and Humanities Research Council; Canadian Institutes of Health Research; and the Natural Sciences and Engineering Research Council, which assists Canadian post-secondary institutions and their affiliated research hospitals and institutes with the expenses associated with managing the research funded by these three federal research granting agencies.

Rio Tinto has been operating in British Columbia for close to 65 years. With industry leading technology and four generations of employee expertise, as well as a clean hydropower facility at Kemano and the Nechako Reservoir, the Kitimat smelter produces aluminum with one of the lowest carbon footprints in the world.