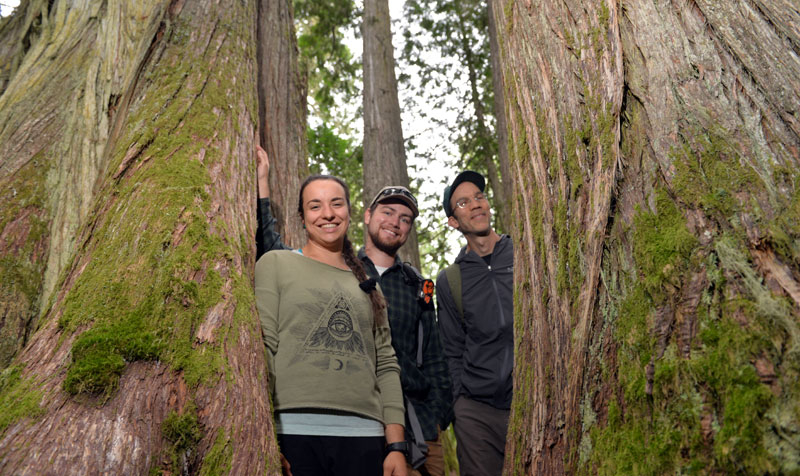 UNBC researchers have discovered a rare orchid in the new Ancient Forest/Chun T’oh Whudujut Provincial Park, one that hasn’t been seen in B.C.’s Interior since 1932.

It’s just one of the more than 900 species, some red- and blue-listed species (endangered or near extinction in B.C. or even globally) that botanists uncovered during a two-week biodiversity assessment in mid-June amongst massive western redcedar stands, valley-bottom wetlands, and river-side cottonwoods, in the new park.

In May 2016, the B.C. provincial government established the Ancient Forest as a Class A Provincial Park, thanks in part to research conducted over the years by UNBC Ecosystem Science and Management professors Dr. Darwyn Coxson and Dr. David Connell, UBC Beaty Biodiversity Museum curator Trevor Goward, and many undergraduate and graduate students at UNBC.

In June 2016, the adjacent Ancient Forest/Chun T’oh Whudujut Protected Area was established. The biodiversity assessment work is being conducted in partnership with the Lheidli T’enneh First Nation and BC Parks, with funding from the Northern Development Initiative Trust and the B .C. Real Estate Foundation.

The Ancient Forest/Chun T’oh Whudujut Provincial Park and Protected Area, located 130 kilometres east of Prince George, encompasses nearly 12,000 hectares in the upper Fraser River watershed, from the top of Driscoll Ridge down through the ancient western redcedar stands into wetlands near the Fraser River. The area, known for generations to Lheidli T’enneh, continues to be utilized for hunting, fishing, and gathering traditional plants.

“There are many habitats (in the new park and protected area) that have not been visited by scientists,” said Dr. Coxson. “We’re just starting to understand the incredible diversity of plants and other species that exist in those areas.

“It’s really gratifying to see the effort of so many people -- the Lheidli T’enneh, community volunteers who are building the boardwalk, many UNBC students who have conducted their research over the years -- resulting in this park and protected area. And we’re now starting to realize, along with the ancient cedar stands, the incredible wealth of plants and animals that are protected in this park and protected area.”

UNBC students and researchers played a role in ensuring the public was notified of the cultural and scientific value of the area and the Ancient Forest was later declared off-limits to logging. Since then, multiple UNBC researchers and classes have visited the Ancient Forest trail site to study the region’s biological systems, and their value for recreation, biodiversity, and economics.

Working with the Lheidli T’enneh First Nation and BC Parks, UNBC has now started a summer research program to visit each area of the park and protected area. Botanists will conduct biodiversity assessments, giving them a more detailed picture of the unique ecosystems in the area.

Those botanists include Curtis Björk and Trevor Goward who are based in Clearwater but are affiliated with UBC and the University of Idaho. They are working with UNBC Forest Ecology and Management students Anna Tobiasz and Hadyn Yeomans, summer students with the Aleza Lake Northern Forest Internship program, to explore the backcountry and collect and document the species they find. 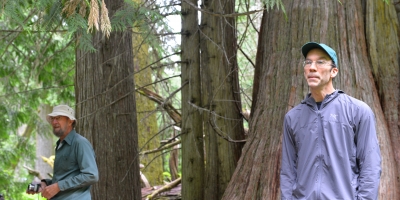 On their first day of exploration, they uncovered 400 species and that tally increased every day.

“At the height of the land you’ve got sub-alpine habitats and those are largely unexplored for biodiversity. And then on the flats you’ve got a series of extensive wetlands down there, bogs, swamps marshes, beaver ponds and those also haven’t been largely explored before,” said Bjork. “So the idea of this project was too look at all the nooks and crannies of the park and areas that have so far been poorly explored and build up a species list.

“I won’t give a projection for how many species total are in the park, but it’s definitely very rich and that richness includes 19 tracked species found so far. Those are species that are considered conservation priority in the province and in some cases at the federal level as well. It’s exciting.”

The field team is documenting the species using field GPS units that provide very precise readings of where exactly a rare species is. They’re also taking photos of them as well as gathering specimens that will end up at the Beaty Biodiversity Museum at UBC.

Researchers will return to the forest for two-week spans in July and September to continue the biodiversity assessments, providing important supporting evidence for any future nomination as a World Heritage Site under the United Nations Educational, Scientific and Cultural Organization (UNESCO).

“We’re talking about an ancient cedar stand, a so-called inland rainforest,” said Dr. Coxson. “Globally, that’s very rare. Most rain forests are near oceans. To have ancient cedars like this 800 kilometres from the ocean is, in itself, scientifically very unique. 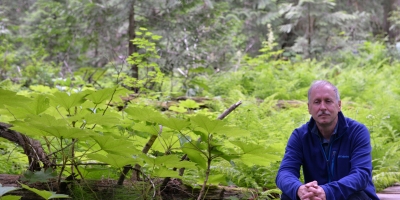 “With our additional findings of so many rare plant species in this little pocket of coastal habitat, I believe we’ll have a very strong case in the future to seek nomination and designation as a World Heritage Site under UNESCO.”

The Ancient Forest trail system also includes the Nowell Senior Accessibility Trail, one that was built entirely by volunteers over many thousands of hours and with donated materials. It’s evolved into a really important tourism destination.

That has provided some real opportunities for Dr. Connell and his students, including recent graduates Jessica Shapiro and Jonathon Hall. Their surveys at the Ancient Forest trailhead, talking to people about their visitor experiences, quantified the economic benefit of visitors to the region.

“We’re standing in an inland rainforest amongst giant cedars, but also plants like Devil’s Club and ferns and skunk cabbages that can reach my shoulders or above. It’s not an easy ecosystem to explore,” said Dr. Coxson. 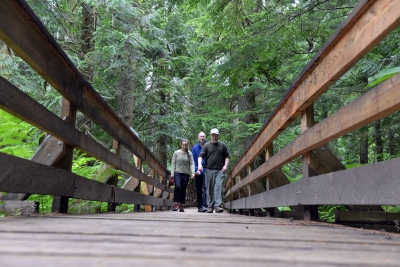 “One of the neat things about the universal boardwalk is it allows people of all abilities, families, seniors, people with wheelchairs, to walk in, to roll in, to experience a 1,000-plus-year-old ancient cedar forest. It’s a unique opportunity in B.C. and indeed North America to experience this ecosystem. With the designation of this area as a provincial park and protected area, and with the possible future designation as a World Heritage Site, the Chun T’oh Whudujut Provincial Park and protected area has the potential to be an international symbol of recognition for Prince George, Northern B.C., and our region.”

UNBC’s partnership with the Aleza Lake Northern Forest Internship program and the Aleza Lake Research Forest Society allows university students to gain valuable field experience in all aspects of forest management while working in the Ancient Forest. Students, faculty and Ancient Forest volunteers have a joint goal of enhancing their understanding of forest ecosystems and the structure of those ecosystems.

“It’s an opportunity for UNBC students who are enrolled in their second, going on into their third year of studies to get involved in a lot of practical applications of what they’re learning, not just in terms of forest management, but forest conservation. This is an excellent partnership and one that’s really seen the students bloom in terms of embracing that whole greater experience of what they’re learning in school,” said Aleza Lake Research Forest Society manager Mike Jull.