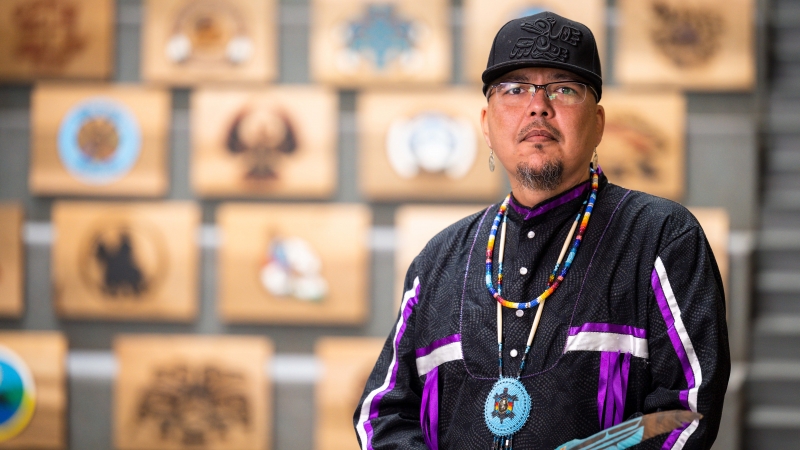 Launched in September 2019 by UNBC’s First Nations Centre, the project serves as a way to honour and give thanks to some of the First Nations communities that the University serves.

Cree/Dakelh artist Clayton Gauthier spent 18 months, including the first six at UNBC’s Prince George campus, carving and painting the planks that represent the logos of 32 nations from across northern B.C. that represent the various and diverse nations UNBC serves. The design of each carving is the official logo of a northern B.C. First Nation which was submitted by the community.

Nenachalhuya is a Dakelh word meaning, “You have done us great honour” or “we are thankful for what you have done.” We say nenachalhuya to these communities for working with us, trusting us to represent them in this way, and trusting us with their students, past, present, and future.

“These carvings that now surround the walls of Lhuhuhwhezdel are another example of the work that UNBC is undertaking around reconciliation,” says UNBC Interim President Dr. Geoff Payne. “It’s an opportunity for our students, staff and faculty, as well as the public to learn more about nations that are represented and breaks down barriers between Indigenous and non-Indigenous people to understand one another.”

Gauthier says that he hopes when the public sees the planks that they are more mindful of how diverse the nations truly are.

“Each nation within each territory holds stories of the land,” he says. “Many different art forms, many different animals, stories and teachings. We have so much to learn.”

Gauthier explained it was an honour to be part of the endeavour.

“As each piece came to light I kept my focus on what was in front of me...taking on this project one piece at a time. When this project was almost complete, I looked back at all the time I spent on it with amazement.

The UNBC community can view the planks by connecting with the First Nations Centre from 8:30 a.m. – 4:30 p.m. to see what time is best.