Equestrian and UNBC student Taylor Winther Blair has always successfully balanced show jumping with academics. In November, she won the CET Medal National Finals competition in Calgary, one of the most prestigious show jumping Under-21 events in Canada. 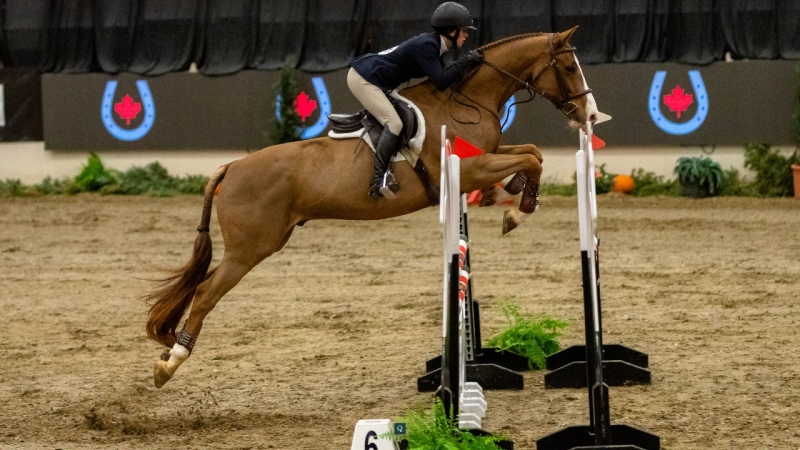 Taylor Winther Blair achieved a major milestone in the show ring in November.

The 19-year-old equestrian, and University of Northern British Columbia biology student, captured the CET Medal National Finals competition in Calgary. It’s one of the most prestigious show jumping Under-21 events in Canada.

Winther Blair, riding a horse named Crack, won the two-day competition by a margin of 2.5 points in a field of twelve riders from across the country. She was the leading rider after the first day, which featured a series of lower, technical jumps where competitors must showcase their skills.

On the second day, all competitors came back for round two which consisted of a traditional jumper course with a time allowed. The jumps were set higher and a different set of skills was tested. The top four from the first two rounds of competition advanced to a jump-off on a shorter course of six jumps. Going into it, she led by a slim margin of 0.5 points.

“I knew it would be close and could go either way,” Winther Blair explained. “In the jump off, you’re judged on how effectively you can ride the course. You want to be efficient and make it look smooth with some shorter, tighter turns. You don’t know your score when you leave the show ring.

“I was pretty shocked when they called my name as the winner. I went into the competition just planning on doing my best and seeing where that took me but I certainly wasn’t expecting to win my first time there. It was pretty surreal.”

Winther Blair’s mount Crack, is owned by Pat Beattie, a client of Dayton Gorsline who Winther Blair trains and rides with at horseshows.

The CET Medal Nationals event is a stepping-stone to the Grand Prix circuit, the highest level of show jumping. The CET Medals are only open to those under the age of 21.

Even though Winther Blair is 19, she is not eligible to return in 2022 to defend her title as she has already won it.

It was her first time she qualified to compete at nationals after just missing out in 2019 with a fifth-place finish in the B.C. regional finals where the top-four advance to nationals. COVID-19 forced the cancellation of the 2020 Medal Nationals.

This year, the Royal Winter Fair was cancelled due to the pandemic causing Equestrian Canada to relocate CET Medal Nationals west to Calgary’s Stampede grounds at the Royal West horse show.

When it comes to qualifying for CET Medal Nationals, Canada is split into four regions – Atlantic (Quebec, P.E.I., New Brunswick, Nova Scotia and Newfoundland), Ontario, Prairie (Manitoba, Saskatchewan, and Alberta), and B.C. The top-four riders from each region advance to nationals.

At the 2021 B.C. regional finals at Langley’s Thunderbird Show Park, Winther Blair placed third to qualify. Two weeks prior while Winther Blair was training for regionals, her horse laid down on her right foot and broke it.

She underwent countless rounds of physio, therapeutic ultrasound and lots of icing and was hobbling on crutches while wearing a walking boot cast to try to recover from the injury. She was doing everything she could to get the swelling down enough to fit her foot into her riding boot under the guidance of her doctor. However, she wasn’t riding or training.

At regionals, she managed to walk the course on crutches, numb her foot, tape it up, and put on her boot. And she qualified for nationals.

By the time she arrived in Calgary a month later, her doctor said she could ride a little and could walk without crutches. She said she wasn’t distracted by the pain. Shortly after winning the national title, the walking cast was removed.

Winther Blair first sat tall in the saddle on a horse since before she could walk and was riding since the age of two or three. She now typically spends two to three hours a day in the barn of her family’s Ridge Country Farm in Prince George. Her mom Sorine Winther, is her trainer as well as an accomplished equestrian herself.

Now in the second year of her Bachelor of Science – Biology degree at UNBC with plans to go to veterinary school when she graduates, Winther Blair is used to balancing studying with the demands of equestrian training and competition.

“Last year worked really well because our classes were online,” Winther Blair said. “The horse shows were running again so I was doing homework on the plane, and in the truck. I don’t have a lot of free time, but I make it work.”