When students living in the UNBC residences turn up the heat in the winter or open the hot water faucet, they may not realize they are taking part in a project designed to demonstrate the feasibility of local energy in growing sustainable rural and northern communities. Once fully operational, the annual reductions in carbon emissions is projected to be 350 tonnes, the equivalent of removing 110 cars from the road. 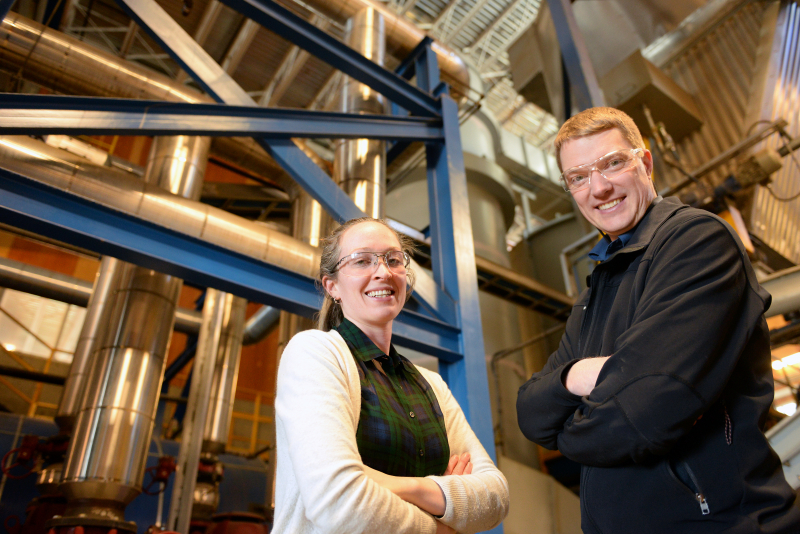 When students living in the University of Northern British Columbia residences turn up the heat in the winter or open the hot water faucet, they may not realize they are taking part in a project designed to demonstrate the feasibility of local energy in growing sustainable rural and northern communities.

The newly renovated suites in the Neyoh and Keyoh residences are part of the Sustainable Communities Demonstration Project (SCDP), a new district energy system on campus.

“The UNBC bioenergy systems do more than simply heat the buildings at our Prince George campus, they are a research facility, a teaching tool and demonstration model for rural and remote communities,” says UNBC President Dr. Daniel Weeks. “By inviting representatives to see our Bioenergy Plant and wood pellet boiler, we can educate communities to help them find innovative solutions to their energy needs.”

Launched in 2014 and completing in 2017, the SCDP connects the heating systems of four campus buildings – including both residences – to UNBC’s existing pellet boiler. The boiler heats water in a closed loop and the hot water is then used to heat the buildings. The hot water heating system replaces the electrical and natural gas heating systems which had been used in the residences.

The pipes used to transport the hot water for heating were put into the ground in 2015 and the Neyoh residence was hooked up to the system in the summer of 2016. The Keyoh residence and the UNBC Childcare Centre are being connected this summer. The IK Barber Enhanced Forestry Laboratory, which was the first building to be heated by the pellet boiler, is also part of the project.

In its first winter of operation and with only one of the residence buildings connected, the project has already resulted in a significant decrease in electricity and natural gas consumption, equivalent to a 36-tonne reduction in carbon dioxide emissions. Not only that, the project also makes economic sense. The electricity and natural gas bills for Neyoh fell considerably through seven months, with net savings of more than $45,000.

Once fully operational, the annual reductions in carbon emissions is projected to be 350 tonnes, the equivalent of removing 110 cars from the road.

The total cost of the capital project is $2.2 million, with $1.1 million coming from the Province of British Columbia. The Omineca Beetle Action Coalition, TransCanada Corporation and the BC Bioenergy Network have also made funding commitments. Pacific BioEnergy is donating the wood pellets that will fuel the system. Contributions from industry and government give northern communities the chance to make renewable energy and environmental sustainability a foundation for the next generation.

The project is designed to model a northern, rural, or off-grid community, effectively serving as a platform for education, research, and demonstration. Rather than heat the water to 120 C like the UNBC Bioenergy Plant does for most of the campus buildings, the pellet boiler only heats the water to 80 C. The lower temperature makes it suitable for possible future connection to alternative heating technologies such as geothermal, solar thermal, and heat recovery.

By building and operating a system like the SCDP, UNBC can model it for other northern, rural and off-grid communities who are considering implementing a bioenergy or alternative energy community heating system.

The first phase of UNBC’s Energy Initiative came online in 2009 when the pellet heating system was connected to the IK Barber Enhanced Forestry Laboratory. The project affirmed UNBC’s ability to successfully own and operate an advanced renewable energy system, while simultaneously producing valuable research.

The multiple award-winning Bioenergy Plant was next to become operational, firing up for the first time in May 2011. It uses gasification to convert sawmill residue into heat via hot water pipes. The plant is the primary method of heating all of the buildings within the main campus loop and has led to an 85 per cent reduction in natural gas use since it opened.