Opened by Her Majesty the Queen in August 1994, UNBC was Canada's first wholly new publicly funded university in 25 years. It is a beautiful campus built over-looking the community of Prince George. It reflects the themes of northern BC, including a unique architectural style and the use of various types of wood and stone.

Click the following thumbnails images to see the architectural drawings and building photos.

University Hospital of Northern BC 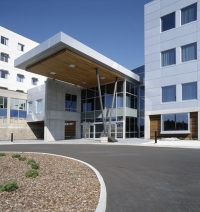 Located in Prince George, the University Hospital of Northern BC (UHNBC) is northern BC's largest state-of-the-art healthcare facility. The hospital plays a key role in clinical instruction of the Northern Medical Program, in addition to the family practice residency program.

Mills Memorial Hospital in Terrace and the Fort St. John Hospital are home to medical students in their third year who are pursuing Integrated Community Clerkships.