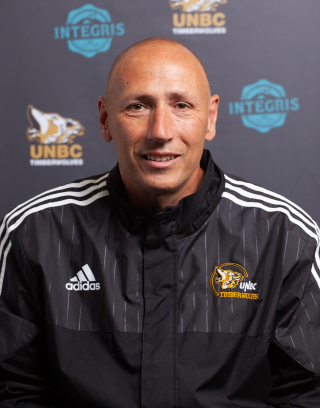 Neil Sedgwick is entering his fifrth year year as the Head Coach for the University of Northern British Columbia, coming off the first Canada West playoff victory in program history, a defeat of the Manitoba Bisons. In 2018, the Timberwolves set team records for wins, points, goals for, and goals against. Neil is also a co-founder and Director of Youth Development for EPIC Sport.

Upon returning to Canada, Neil quickly connected himself once again with the National Team Program, helping as a Technical Assistant in Canada's U17 Women campaigns toward World Cup qualification in 2012 and 2013.

While in the US, Neil added USSF (United States Soccer Federation) 'A' Licence certification to the Canadian Soccer Association 'A' Licence and Level Five certification.  He then went on to coach at the Olympic Development Program (ODP) level in both Southern California and Montana and was called upon in all three states (ND, CA, MT) to be part of their coach education programs.

Following his graduation from the National Coaching Institute - Victoria (1996) and his Masters of Education (Coaching Studies) from the University of Victoria, Sedgwick returned to Halifax to assist Neil Turnbull, then the head coach of the Canadian national team, with Dalhousie University's women's team. This led to Sedgwick becoming part of that national women's team staff for the next three years.

During this time, Sedgwick returned to British Columbia in 1997 and took on the position of Head Coach/Director of the Upper Island Regional Soccer Center based out of Nanaimo for two years. Here he established his many positive contacts on Vancouver Island while administering the coach, player and referee development programs in the areas of Nanaimo, Parksville, Port Alberni, Courtenay/Comox, Campbell River and Powell River.

A native of Sackville, Nova Scotia, Sedgwick was a three time CIAU (Now CIS) All Canadian (once at Saint Mary's University and twice at Dalhousie University), and was selected fifth overall in the 1990 CSL (Canadian Soccer League) draft by the Winnipeg Fury.  He continued his career in the CSL by playing for his hometown team the Nova Scotia Clippers and later the Montreal Supra. In 1993 Sedgwick represented Canada, while playing at the World University Games. During his time on Vancouver Island Sedgwick competed with the Victoria Athletics, Victoria United and later Nanaimo United. He now plays for the University of Victoria Alumni when in Victoria.