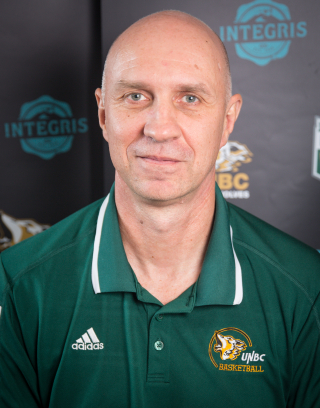 Sergey Shchepotkin is entering his eighth season with the UNBC Women’s basketball team, and has seen the Timberwolves progress immensely under his watch. In 2018/2019, the Timberwolves topped the Lethbridge Pronghorns to earn playoff victories in consecutive Canada West seasons. It also marked the fourth consecutive conference playoff berth for the TWolves.

Shchepotkin played 15 seasons of professional basketball in Russia and Lebanon, and was a member of the USSR National team. Upon retiring from playing in 2000, his first coaching experience came in Lebanon, where he developed the first youth basketball program in the area.

He then transitioned to the American University of Beirut, where he served as Head Coach of the Men’s program, guiding them to a first-place finish in the Lebanese Interuniversity League. This led to an opportunity to develop the “HOOPS” Sports Club in Beirut, where he served as Manager and Head Coach. Shchepotkin led the club to the top of many Middle East basketball tournaments.

From there, he coached Dynamo Moscow, a premier team in the women’s professional league in Russia, where Shchepotkin coached four WNBA players. He was responsible for coaching, scouting, recruiting, and player performance in his time in the Russian Basketball Federation. His teams advanced to the FIBA Euro Cup playoffs.

His vast experience and understanding of the game led to significant success on the sideline. Shchepotkin coached 24 national team players in four countries, eight European champions, two Asian champions and one bronze medalist at the Beijing Olympics in 2008. Three members of his Dynamo Moscow team were gold medalists in the FIBA 3x3 World Championship in 2016.

In August, 2013, Sergey Shchepotkin was named Head Coach of the UNBC Timberwolves Women’s basketball team. The TWolves qualified for the Canada West playoffs in 2016/2017 and 2017/2018, and both years, had players named to the Conference All-Star team.