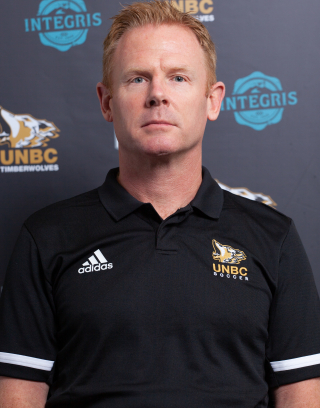 Steve Simonson heads into his sixth season as the Head Coach of UNBC Men's team, coming off another great season. Under his watch, the Timberwolves broke team records for wins, points, goals for, and goals against.

Steve was a long time Victoria youth development expert and has had a number of players who have trained under him move to the university and professional levels. Steve left the Victoria Highlanders organization in 2015 after serving as the Club’s PDL Head Coach for two and a half seasons. Simonson was with the Highlanders since its inception in 2008 filling the roles of PDL Assistant Coach, Director of Youth development, Super 20 Coach, and Head Coach of the Boys Prospects during his time at the club.

Simonson took over the Head Coaching duties of the PDL team for the final 7 games of the 2012 PDL season and served as the Head Coach for the full seasons in 2013 and 2014.

During the 2013 PDL season the Highlanders posted their best campaign in the clubs History winning the Northwest Division and Western Conference Championships only to lose in the PDL Semi Finals to Thunder Bay Chill. The 2014 regular season fell just short of the 2013 league success, regardless the Highlanders did finish 2nd in the ever-difficult Northwest Division and clinched a home playoff game. A second consecutive trip to the Western Conference Finals was not to be however as the Highlanders lost to the Vancouver Whitecaps FC to end the 2013 season.

In the late 90s Simonson coached several youth select level teams in Victoria and was involved as an assistant coach in the BC Provincial Teams programs. He was heavily involved as a staff coach for the BCSA Regional Soccer Centre for the Lower Island, and spent a year running the Upper Island Centre in 1999/2000 after he graduated from UVic.

In 2002 Simonson accepted a position as the Men’s coach at the Royal Military College who at the time was in the Ontario Collegiate Athletic Association. Simonson spent two seasons at RMC where he managed to coach an overachieving side to an above 500 record over two seasons. Simonson’s last game in charge of the Paladins was a narrow 1-0 loss to Humber College in the OCAA Semi Finals.

Simonson left RMC to move back to the West Coast of Canada and became the Technical Director of the Langley United Youth Soccer Club, a boys soccer club based in Langley BC. He began initiatives to create a Long Term Development Model for the club, and oversee its Select Team program. Simonson was the Head Coach of the u18 Select team for Langley in the 2004/2005 season and led them to a Coastal Cup Final and Provincial Cup final, losing both competitions to a strong Burnaby Royals Side that went on to win the Canadian National Club Championship.

During his time at Langley, Simonson was a part time assistant coach for the Vancouver Whitecaps W League program. Simonson left Langley to take on a full time role with the Whitecaps in 2006 as the Assistant Coach for their W League team and Head Coach of the Girls Prospects program. Simonson was on staff with the women’s team for their 2006 W League Championship campaign where they defeated the Ottawa Fury 3-0 to claim their 2nd W League Title.

Simonson is currently doing his Masters Degree (MSC Kin) at the University of Victoria with a focus on Motivational Climate in Sport.