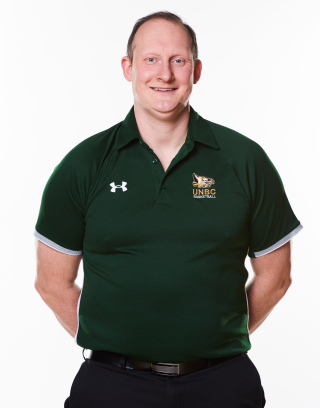 Todd Jordan has been Head Coach of the UNBC Men's basketball team for ten seasons, seeing the Timberwolves through their transition from the BCCAA to Canada West. In 2017/2018, under Jordan's guidance, the Men's basketball team became the first UNBC program to earn a Canada West playoff victory, after their victory over the Winnipeg Wesmen in February 2018. They returned to the conference playoffs in 2018/2019, the third trip to the Canada West postseason under Coach Jordan.

Todd Jordan has a long history with the Men’s Basketball program at UNBC.  His journey with the Timberwolves started as a student-athlete, playing for the team in the 2001/02, 2002/03, and 2003/04 seasons before an ACL tear ended his playing career.

Shortly after Todd’s days on the court as an athlete ended, his passion for coaching began and Todd stayed heavily involved with the program in various capacities an assistant coach and volunteer with the Timberwolves Men’s and Women’s Basketball Programs between 2004 and 2009.  During this time, Coach Jordan was also heavily involved in local high school basketball, acting as a coach with the Duchess Park Senior Boys Basketball Team from 2005 to 2008.  During his time at Duchess Park, Todd won a AA BC Provincial Championship as a Co-Coach in 2006, and a North Central Zone Championship as Head Coach in 2007.

After a short stint as the Head Women’s Basketball Coach at Quest University in 2009/10, Todd took over as the Head Men’s Basketball Coach at UNBC in late 2010.  Highlights of his head coaching career at UNBC include trips to the CCAA National Championships in 2011 and 2012 as well as a PacWest Conference Championship in 2012.  After making the Jump to USports in 2012, Todd led the team to UNBC’s first ever Canada West playoff appearance and a second-place finish in the Explorer Division in 2014/15.

Todd has also been involved with the Basketball BC Provincial Team Program, coaching the U16 Boys Provincial team in 2011 and the U17 Team in 2012 and 2013.  Todd won a bronze medal with BC at the U17 Canada Basketball National Championships in 2012.  During this time, he also participated as Head Coach with Team BC at the 2013 Canada Summer Games in Sherbrooke, QC.

Coach Jordan holds bachelor degrees in Commerce and Education from UNBC.  He is a NCCP Level 3 certified coach who also holds teaching certification through the BC Ministry of Education.

Todd is proud to work to grow the men’s basketball program as a UNBC Alumnus who was born and raised in Prince George.  In his spare time, Todd also volunteers as a part-time coach with the Prince George Special Olympic Basketball Team.