On 4th August 2014, the dam containing the tailings pond at Imperial Metals Corporation's Mount Polley Mine failed catastrophically. This resulted in the release of approximately 8 million m³ of sediment and 17 million m³ of water, which flowed down Hazeltine Creek and into both Polley Lake and Quesnel Lake. 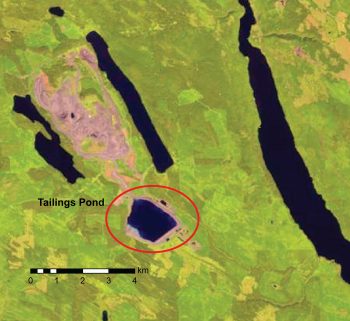 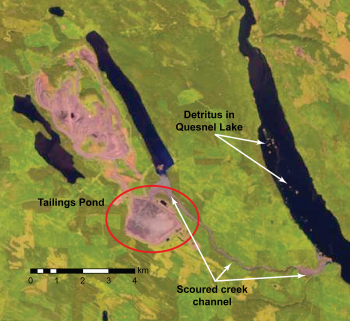 UNBC faculty, staff and students, together with collaborators from universities and research institutes across Canada and overseas, federal and provincial government agencies and First Nations, are actively involved in research aimed at improving understanding of the immediate and longer-term environmental and ecological implications of this event. This work has continued throughout the past two years, and builds on the 'baseline' data accumulated previously.

The main goals of the research have involved compiling a detailed picture of how the physical and chemical characteristics of the tailings influx are interacting with the lake's water, natural sediments, biology and bathymetry, within the context of its internal circulations and the meteorological influences which drive them.

Based primarily from the QRRC, researchers continue to collect and analyze water, sediment, and biological samples from the lake and surrounding watershed, and to monitor the movement of water and sediment plumes in Quesnel Lake itself. Other scientists from the University of BC, University of Lethbridge and the federal Department of Fisheries and Oceans are also involved in this major project, which received a grant of $800,000 from Environment and Climate-Change Canada's Environmental Damages Fund (news release).

Information relating to study of the breach's potential impacts is also available from the BC Ministry of Environment, and Imperial Metals Corporation.

This page provides a summary of the QRRC's related activities to date, a directory of relevant publications, and a list of related media coverage in the aftermath of the spill (to October 2016). More information will be added as it becomes available.

New Findings on Impacts of the Mount Polley Breach

A series of new findings have been published by researchers investigating the impacts of the tailings released from the Mount Polley Mine storage facility on physical and biological components of the natural environment in and around Quesnel Lake.

The most wide-ranging of these studies (involving 14 co-authors, mainly from UNBC, UBC and Fisheries & Oceans Canada) found signs of seasonal re-suspension of the tailings deposited in the lake's West Basin, mainly during thermal turnover of the water-column in spring and fall, but also aided at times by transfers of water along the lake, driven by surface winds. These results, which have been published in the journal Water Resources Research, are available with open access here: press releases summarizing the key points were posted by UNBC and the University of Alberta.

The wind-driven transfers relate to a phenomenon known as seiching, when standing waves are established within a lake through interactions between its bathymetry and persistent winds. The incidence of such conditions was explored by MSc Hadleigh Thompson, with co-supervisors Dr Stephen Déry (UNBC), Dr Peter Jackson (UNBC), and Dr Bernard Laval (UBC). Hadleigh's research was published in the International Journal of Climatology, where it is available for open access.

The ecotoxicological effects of metals-enriched tailings and wildfire ash on amphipods (small freshwater shrimp-like invertebrates) in Quesnel Lake were investigated by another master's student, Raegan Plomp of the University of Lethbridge, with colleagues Dr Jamie Klemish and Dr Greg Pyle. The team's findings suggest greater toxic impact as a result of the superimposed influences of wildfire ash fallout and copper contamination. These results were published with open access in the journal Environmental Toxicology and Chemistry, and are available here.

New Research into Impacts of Tailings on Quesnel Lake Microbiology

The results of a detailed analysis of the bacterial communities on the bed of Quesnel Lake in areas where tailings were deposited, with comparisons to those from unaffected parts of the basin, have been published in Scientific Reports. The study, led by Dr Ido Hatam of UBC (with contributions from others at UBC and UNBC / QRRC) is available for open access here. 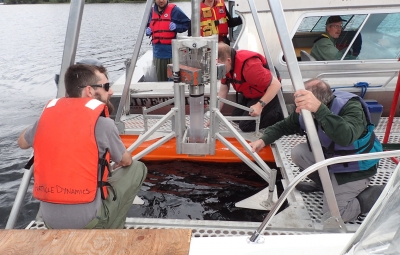 Over a ten-day period in mid-July 2016, a team of eight researchers from UNBC, UBC, the Bedford Institute of Oceanography (BIO) and the community of Likely took a series of cores from locations on the bed of Quesnel Lake. The main purpose of this sampling was to improve understanding of the current distribution of the sediment which entered the lake as a result of the breach. Describing the physical, chemical and microbiological composition of the cores will help to build a more complete picture of the tailings' impacts in different parts of the lake.

Drs Phil Owens and Ellen Petticrew presented a poster, co-authored by Sam Albers, at the 2016 General Assembly of the European Geosciences Union, held in Vienna, Austria from the 17th to the 22nd of April 2016. The poster provided details of the dam breach, the sampling and research response by UNBC and the QRRC, and some initial results. The abstract is available in PDF form, here.

A paper describing initial research into the breach was published in Geophysical Research Letters, an academic journal of the American Geophysical Union. The paper, titled The impact of a catastrophic mine tailings impoundment spill into one of North America’s largest fjord lakes: Quesnel Lake, British Columbia, Canada was written by twelve scientists from the University of Northern British Columbia, the University of British Columbia, Fisheries and Oceans Canada, and Vynx Design Incorporated. The paper is available in full as a PDF (Adobe Acrobat) format (1.5 Mb). Additional information was published in a UNBC Press Release

Researchers from the UNBC and the University of Lethbridge collaborated to present a poster at the annual conference of the Society of Environmental Toxicology and Chemistry of May 2015, held in Barcelona, Spain. The focus of the meeting was Environmental protection in a multi-stressed world: challenges for science, industry and regulators. 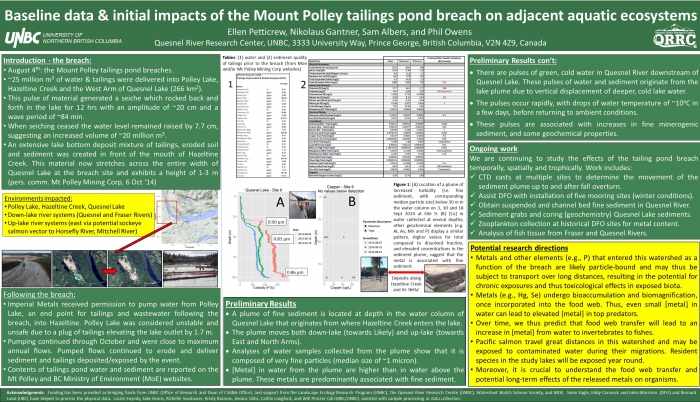 The poster is available for download in PDF (Adobe Acrobat) format (1.4 Mb).

QRRC's two Forest Renewal BC endowed chairs, professors Ellen Petticrew and Phil Owens, presented details of their research relating to the breach of the Mount Polley Mine at the joint assembly of the American and Canadian geophysical unions held in Montreal, Quebec from 3-7 May 2015.

Petticrew et al.: Regulation of the Distribution of Anthropogenic Contaminants by Physical Limnological Processes in a Relatively Pristine Watershed: the Breach of the Mount Polley Mine Tailings Impoundment, British Columbia, Canada

Owens et al.: From the (relatively) pristine to the polluted: the breach of the Mount Polley Mine tailings impoundment, Quesnel Watershed, British Columbia

Sam Albers, Ellen Petticrew & Phil Owens: From the (relatively) pristine to the polluted: The Breach of the Mount Polley Mine Tailings Impoundment, Quesnel Watershed, British Columbia.

A short (3½ minute) video has been made describing research at the QRRC related to the Mount Polley Mine tailings ponds breach.

Papers are listed in alphabetical order by lead author.

This section provides links to a range of press coverage relating to the breach, from its immediate aftermath until October 2016.