Throughout its history, the QRRC has hosted a wide range of research and scientific activities related to anadromous fish species, and particularly salmon. This links directly with its focus on landscape ecology: salmon provide a key source of marine-derived nutrients for forests (as described in this article), and the headwaters of the Quesnel River watershed are a major Interior ‘hotspot’ of dependence by grizzly bear populations on the nutrition provided by returning fish (as identified by the study described here and here.). The life-cycle of salmon inextricably connects conditions in the ocean with those in the continental interior, integrating marine, freshwater and terrestrial ecology. Both climatological and direct anthropogenic influences are seriously impacting salmon stocks, as highlighted (for example) by the Cohen Commission into the Decline of Fraser River Sockeye (2012), and considered further by the federal Department of Fisheries and Oceans (DFO) in State of the Canadian Pacific salmon: Responses to changing climate and habitats (2019).

As well as supporting research by university-based faculty and students, the QRRC hosts scientists from a variety of government and community-based agencies, including the DFO, First Nations, and related organizations such as the Upper Fraser Fisheries Conservation Alliance (UFFCA). The centre has also assisted with projects focusing on key non-anadromous species by provincial environmental ministries and the Freshwater Fisheries Society of British Columbia (FFSBC).

This page provides a summary of research and other scientific activities related to salmon and anadromous fish hosted by the centre, organized as follows:

Most research conducted at the QRRC explores connections between the surrounding watershed’s climate, physiography, hydrology and limnology with its freshwater and terrestrial ecology, and particularly with salmon.

Since the breach of the tailings-pond at the Mount Polley Mine in August 2014, which released nearly 20 million m³ of metals-enriched slurry into Quesnel Lake, the principal goal has been to assess the resultant impacts on water quality and ecosystem health. This research, involving scientists from UNBC, the University of BC, University of Lethbridge and DFO, is described in detail on its own page.

Another key strand of investigation focuses on interactions between the marine-derived nutrients introduced to local rivers and lakes spawning salmon, and the sediment and associated ecosystems into which they are released. The following published papers and theses describe some of this work:

The QRRC has also hosted researchers investigating aspects of fish biology, ecology and behaviour: some of their findings are published in the following papers and theses:

The centre’s site on the bank of the Quesnel River, a few kilometres downstream of the outlet from Quesnel Lake, provides an ideal location from which to monitor salmon migrating upstream from the ocean, on their way to spawning beds in the Mitchell and Horsefly watersheds and the lake itself.

During years in which the number of returning salmon are of particular interest, the DFO’s sockeye stock assessment program has based staff at the QRRC to analyse data from SONAR equipment and field surveys, thereby estimating numbers of passing sockeye and chinook. The Northern Secwēpemc te Qelmūcw (NSTQ) have also used these methods to monitor returning coho and pink salmon. 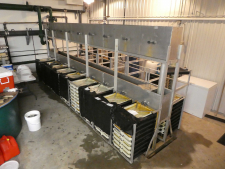 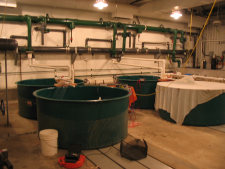 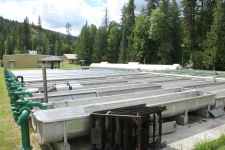 The QRRC has contributed annually to the ‘Stream-to-Sea’ program run by the DFO's Salmonid Enhancement Program (SEP), with staff and equipment helping to harvest eggs from chinook salmon migrating up the Quesnel River. The fertilized eggs are incubated at the centre, and the resultant alevins distributed to schools throughout BC’s central Interior. This provides students with invaluable first-hand experience of the salmon life-cycle, and is frequently also used as a link to introduce concepts of responsible watershed stewardship and ecological connectivity.

The images below depict scenes from the 2017 chinook egg-take, with students and staff from Lake City Secondary School in Williams Lake: (left to right) Kukpi7 (Chief) Fred Robbins of the Esk'etemc Nation gives thanks; DFO SEP community advisor Guy Scharf disentangles a chinook salmon from the net; eggs being harvested from a donor female. 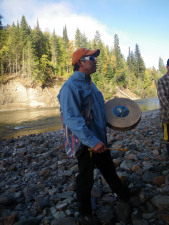 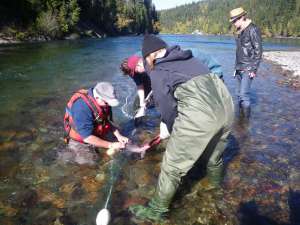 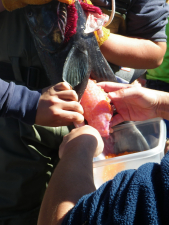 At some point during the winter of 2018 – 2019, approximately 85,000 m³ of rock detached and fell from a bluff 125 m above a narrow point in the Fraser Canyon near Big Bar, 50 km to the south-west of 100 Mile House. This event created a new five-metre-high waterfall in the river, presenting an impassable obstacle to fish attempting to migrate upstream during high-flow conditions in the spring and early summer. 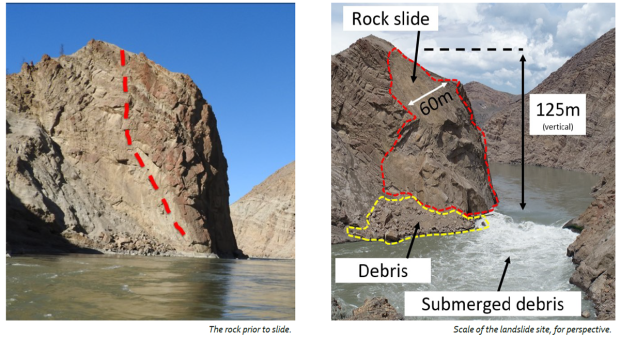 Details of the Big Bar Slide - pictures from DFO, by way of the CBC

Given the key importance of Fraser River salmon to indigenous communities and natural ecosystems throughout much of BC’s central and northern Interior, and against a background of generally declining populations during recent decades, the DFO, provincial agencies and First Nations organizations developed a range of approaches to mitigate the impacts of the slide on fish returning to their spawning-rivers. More information on these responses is available from the relevant federal and provincial agencies involved.

One of the contingencies for supporting key stocks involved rescuing salmon from below the slide: the fish then underwent genetic testing to determine the population to which they belonged (i.e., the river in which they were born), before being stored at the Nechako White Sturgeon Conservation Centre in Vanderhoof until they were ready to spawn. As part of a project implemented by the UFFCA, the eggs were then transported to the QRRC, where they were fertilized and incubated in running freshwater. Apart from the availability of suitable equipment at the centre, a key benefit is that its hatchery systems are fed from wells, so fish raised there do not ‘imprint’ onto local surface-water characteristics, this being delayed until they are released into their natal streams. The project incubated approximately 210,000 eggs: once developed from eggs to alevin to fry, the fish will be released into their ‘home’ rivers sometime in the summer of 2021.

The QRRC traditionally holds an Open House in late September or early October, providing an opportunity for the local community to learn about research conducted at the centre during the prior year.

In the latter part of 2011, the centre hosted a Stakeholder Workshop Series, in which representatives from provincial, municipal and first nation governments, local community organizations, industry and agriculture and academia discussed approaches to developing constructive relationships relating to water, climate-change and salmon. 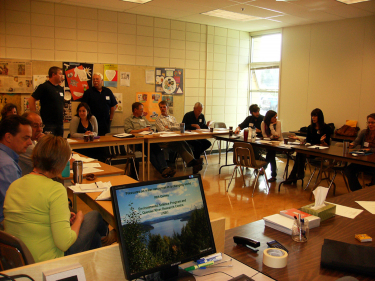 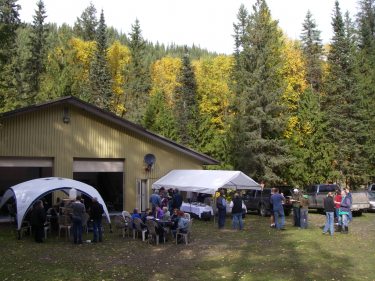 Staff from the QRRC have also presented at the conferences and meetings of the Pacific Streamkeepers Federation, a forum for community-based stream and salmon enhancement programs, attended the Horsefly Salmon Festival, and regularly presented research updates to the UFFCA. The centre is currently participating in a new initiative of the Canadian Wildlife Federation to restore fish passage in several BC watersheds, focusing on the Horsefly River.

The centre also frequently hosts visits from local schools, First Nations communities and special-interest groups. In these images, students from Likely Elementary School are introduced to salmon anatomy by fish biologist Judy Hillaby, and release chinook fry raised under the 'Stream-to-Sea' program into the Quesnel River. 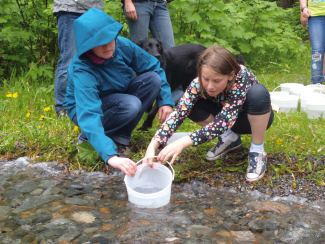