BC Biotechnology leader Dr Donald Rix is donating $3 million to UNBC to expand health research and education in northern British Columbia. The contribution is the largest ever received by UNBC. In response, the University’s medical building will be named the Dr Donald Rix Northern Health Sciences Centre. 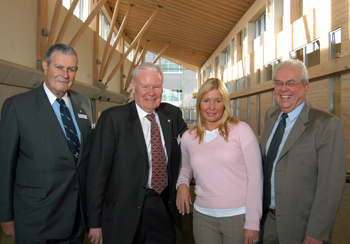 Dr Rix has been a member of UNBC’s Board of Governors since 2003 and has active relationships with all of BC’s universities and BCIT. He has contributed nearly $1 million to UVic’s Bamfield Marine Station, provided major funding to an $8 million building at UBC housing high-tech companies, and received honorary degrees from Simon Fraser University, BCIT, and the University of Western Ontario. Dr Rix has also established a facility at Western that supports research on the molecular basis of diseases such as cancer, diabetes, and multiple sclerosis. He is pictured here (second from left) with Chancellor Peter Bentley (far left), Dr Rix's daughter, Laurie, and UNBC President Charles Jago (far right).
Dr Rix is currently the Chairman of MDS Metro Laboratory Services, the largest independent community medical lab in BC. He is also one of the founders of Cantest Ltd, which conducts air quality and soils testing, as well as analysis of pesticides in food. Dr Rix is a leader in the BC technology and biotechnology communities, serving as a director of Genome BC, a director of the BC Children’s Hospital Foundation, and a member of both the BC Innovation Council and the Premier’s Technology Council, as well as representing the province on science and technology missions to countries throughout the Pacific Rim.
Dr Rix received his MD from the University of Western Ontario in 1957 and earned the Order of British Columbia in 2004.
“This is truly a great day for UNBC,” says UNBC President Charles Jago. “Don is a thoughtful philanthropist who has supported many education, health, and arts projects throughout the province. We feel fortunate that he has invested his time, experience, and money with UNBC. In addition, his contribution will help us to build health research capacity here that will benefit all northerners and position UNBC as a national leader in rural and aboriginal health.”
"I'm a strong supporter of UNBC,” says Dr Rix. “The expansion of the medical school to UNBC will benefit health in northern BC in many ways"
The Rix donation was announced by UNBC Chancellor Peter Bentley during a ceremony in the Northern Health Sciences Centre, the building that now bears Dr Rix’s name. Attendees included representatives from the Government of BC, the UNBC Board of Governors, officials from the BC high-tech industry, and UNBC faculty, students, and staff.