"...we’re able to track how a forest that becomes infected by the pine beetle evolves from being a carbon sink to a carbon source." 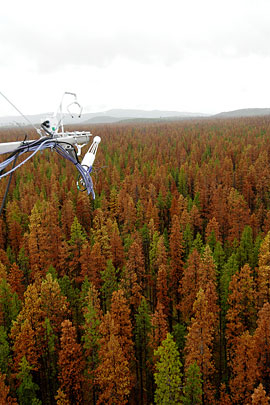 Scientific instruments attached to the top of 33-metre towers are measuring the levels of carbon dioxide in the atmosphere above beetle-infected forests. Download the high-resolution image. 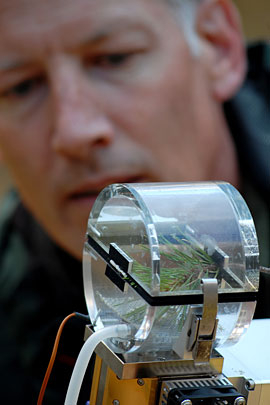 Could this sea of red forests in BC be contributing to climate change? The current pine beetle epidemic may have been facilitated by global warming, but research involving UNBC professor Art Fredeen is now exploring whether beetle activity is now creating additional warming.

Researchers have long-suspected that the rapid growth in the population of the mountain pine beetle has been caused by climate change. Essentially, recent winters have not been cold enough to kill the beetle and prevent its spread throughout much of the BC Interior. Now, researchers from the University of Northern British Columbia, UBC, the Ministry of Forests, and Phil Burton and Tony Trofymow from the Canadian Forest Service are all trying to determine how the beetles themselves may be contributing to climate change by raising the levels of greenhouse gases in the atmosphere.

The research is being conducted at two sites north of Prince George: one near Crooked River Provincial Park and another at Kennedy Siding east of Mackenzie. At both sites, 33 metre-tall towers have been installed with a variety of scientific instruments measuring emissions of carbon dioxide from 1) standing forests where the trees have been killed by the pine beetle and 2) areas that have already been logged.

“Carbon dioxide is one of the most important greenhouse gases and forests are known to contain large amounts of carbon,” says UNBC Ecosystem Science and Management professor Art Fredeen, who is participating in the research. “Clear-cutting can release enormous amounts of carbon to the atmosphere, for 10 years or more after harvesting. The pine beetle infestation has led to very high levels of logging activity in northern BC and we’re interested in finding out what this activity will mean to the levels of carbon dioxide in the atmosphere. By taking measurements at the same site over a number of years, we’re able to track how a forest that becomes infected by the pine beetle evolves from being a sink for carbon to a source. Last year, our site at Kennedy Siding was green; now about 95% of the pine trees are infected.”

The sheer scale of the mountain pine beetle infestation means that salvage logging could have a very real impact on the link between forests, harvesting, and climate change. The project is being funded by the Canadian Foundation for Climate and Atmospheric Science and the BC Forest Sciences Program

“Over the past 150 years, the levels of carbon dioxide in the atmosphere have risen considerably. The burning of fossil fuels is considered to be the major culprit, but about 25% of the increase is due to deforestation. Old forests store tremendous amounts of carbon that they acquire during photosynthesis,” says Dr. Fredeen. “If trees are cut down or are killed by the pine beetle, they don’t absorb carbon anymore. Climate change may be a final result.”

Dr. Art Fredeen is a forest ecophysiologist who is primarily interested in the way that forest management and natural disturbances (such as the mountain pine beetle infestation) influence the storage of carbon in sub-boreal landscapes. He also studies specific characteristics of lodgepole pine and, more generally, the impacts of forest management on biodiversity. Dr. Fredeen earned his doctoral degree from the University of California at Berkeley. He has been a professor at UNBC for more than 13 years.