Prince George, BC – More than 1,000 pounds of food has been provided to charity in the Prince George community since October, thanks to collaboration between students and food service providers at the University of Northern British Columbia.

The UNBC Food Recovery Project collects surplus food from UNBC’s new Dining Hall (that in the past would have gone to the landfill) preserves it, and arranges for it to be picked up by the Society of St. Vincent de Paul Prince George.

Former UNBC student Shaun Cormier, an International Studies and Northern Studies major, developed the concept and applied for a grant through UNBC’s Green Fund in May of 2014, receiving $2,250 to establish the program. Cormier felt it was a simple yet powerful project that could become a model for other food service organizations.

“The idea came from a class at UNBC in the fall of 2013 called Globalization, in which as part of an assignment we had to do some volunteer work and present on it,” says Cormier, who is now completing a master’s degree in Finland. “The subject was poverty, hunger, and homelessness. Maggie Hall, another student I worked with on the project, and I were approached by Dr. Matias Margulis, who suggested that if we would continue this further, there is funding through the university for projects like this.”

Several students have taken on the project as Cormier studies overseas, including Melanie Anderson and Torrye McKenzie, the Campus Food Strategy Group Coordinators. Anderson says it’s a great way to learn about food waste and how to ensure proper nutrition for underprivileged groups.

The students label, weigh and catalogue all food, and store it in a special refrigerator between the biweekly pickup by a St. Vincent de Paul volunteer. A recent weigh-in revealed the project had recovered and donated more than 1,000 pounds of food to charity since it began at the start of the school year. 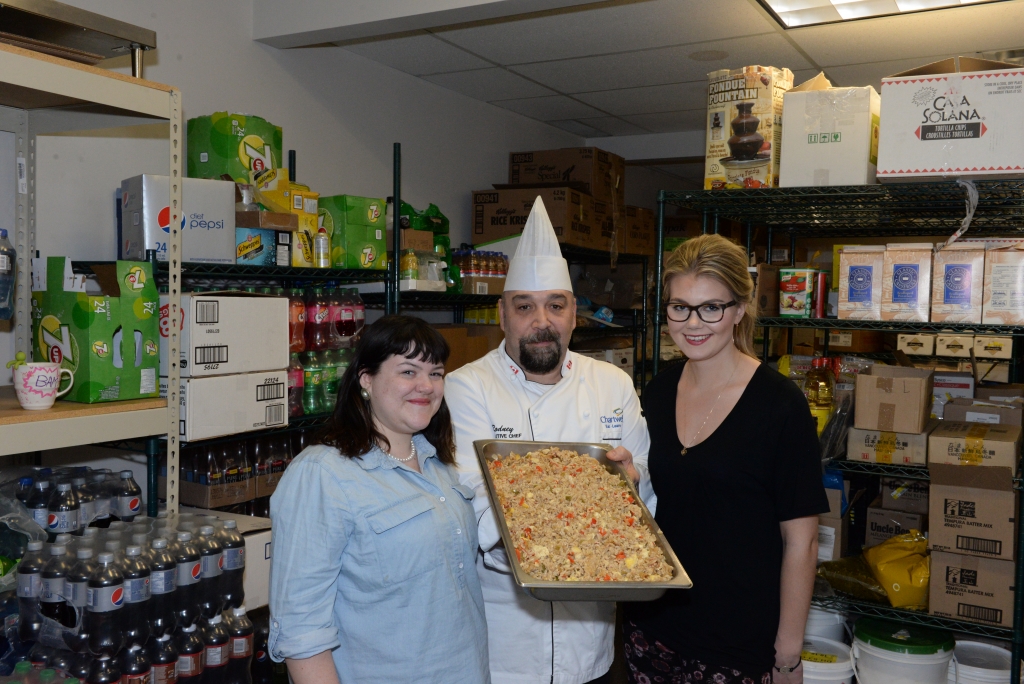 Rodney Mansbridge, the Executive Chef at UNBC Food Services, says his kitchen does everything it can to minimize food waste, but it’s inevitable that more food will be prepared than is needed. The UNBC Food Recovery Program is one means to ensure the food doesn’t go to waste.

Mansbridge says he’d recommend food recovery to more kitchens, because it raises awareness of the importance of providing food to people from all economic backgrounds, and reflects well on the organization.

Bernie Goold, President of the Local Conference of the Society of St. Vincent de Paul, says food from the UNBC Dining Hall provides a hearty component to meals served by her organization. The Society serves three meals a day on weekdays and two on weekends, and Goold estimates they serve 220 to 230 people a day on average. On Monday the centre served 168 people lunch just with food from the recovery program.

“The biggest benefit is that it saves us from having to purchase food with our limited funding,” says Goold. “The UNBC donation enhances our lunches and adds a variety of food ingredients that we could not afford to purchase.”