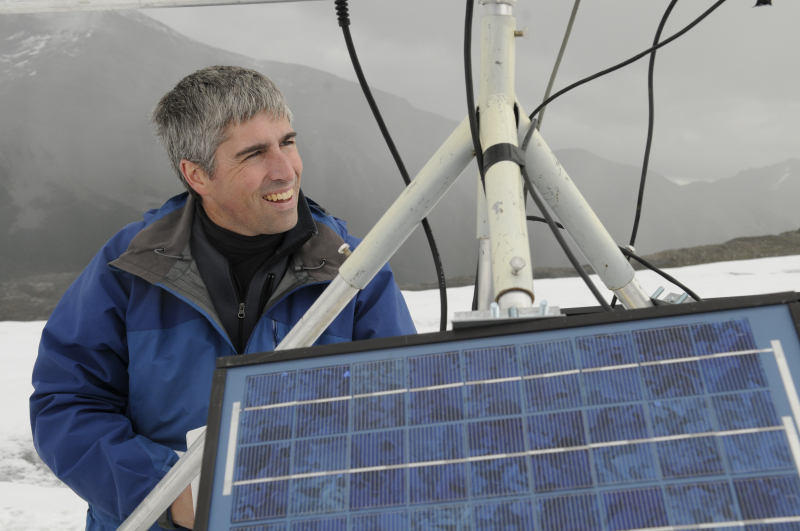 A research paper co-authored by Brian Menounos projects that glaciers in Western Canada will lose 70 per cent of their volume by the end of the 21st century. Download high-resolution version

Prince George, BC – A research paper co-authored by a UNBC faculty member projects that glaciers in Western Canada will lose 70 per cent of their volume by the end of the 21st century. The paper, entitled Projected deglaciation of western Canada in the twenty-first century, was published online by the journal Nature Geoscience on April 6.

Brian Menounos, a UNBC geography professor and Canada Research Chair in Glacier Change, helped propose the study and coordinated with researchers at the University of British Columbia, the University of Iceland, and the Pacific Climate Impacts Consortium.

Researchers used observational data, computer models and state-of-the-art climate simulations to predict changes in the area and volume of glaciers under a range of greenhouse gas emission scenarios used by the Inter-governmental Panel on Climate Change (IPCC) in their last major report about the state of the climate system.

The study found that glacier volume in western Canada will decrease 70 per cent by the year 2100. Surface runoff from retreating glaciers is expected to peak between 2020 and 2040, with substantially reduced flows expected for the remaining half of the 21st century.

British Columbia and Alberta contain more than 17,000 individual ice masses, and these glaciers provide cool, plentiful water to many of the region’s headwater streams during late summer when seasonal snowpack has become depleted.

“The loss of glaciers has direct implications on aquatic ecosystems, hydroelectric power generation, mining, alpine tourism, and water quality,” says Menounos. “While the wetter Coast and St. Elias Mountains are expected to only lose about half of their glacier volume, the drier interior and Rocky Mountains are projected to lose most of their glaciers, with projected area and volume losses of 90 per cent relative to today.”

Menounos says glacier reduction could have implications for the Columbia River Treaty, an international agreement between the United States and Canada for cooperation on hydroelectric power generation and flood control, when it becomes open to renegotiation by either country in 2024.

“I congratulate all authors for their contribution to the issue of climate change,” says Ranjana Bird, Vice-President of Research at UNBC. “This is an important publication that not only documents a significant scientific finding, but also demonstrates the importance of inter-university partnership, considering that scientific talent is distributed around the world.”

The study involved close cooperation with scientists from BC and Alberta and involved dozens of students and several Postdoctoral Fellows. It was supported by the Canadian Foundation for Climate and Atmospheric Sciences, the Natural Sciences and Engineering Research Council of Canada, BC Hydro, the Columbia Basin Trust, UBC, and UNBC.