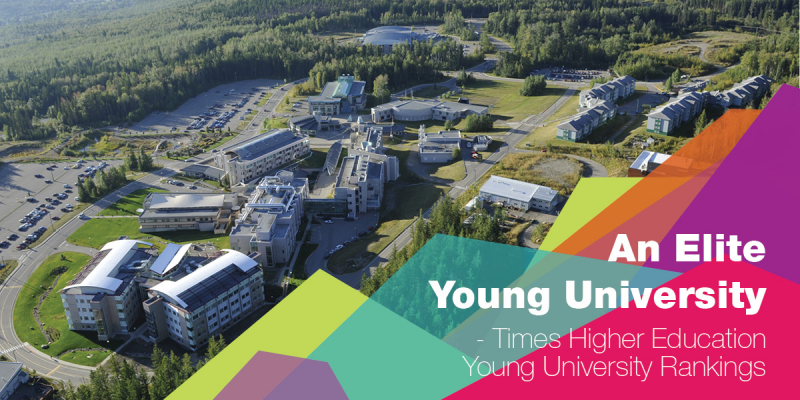 Prince George, B.C. – The University of Northern British Columbia is ranked among the elite young universities in the world, according to a new list published by Times Higher Education.

For the first time, UNBC is included on the list of the best 250 universities that are aged 50 years or younger. UNBC is featured in the group of universities ranked 151st to 200th.

“As an elite young University, UNBC is responsive, innovative and can adapt to the evolving needs of our students and researchers,” says UNBC President Dr. Daniel Weeks. “This ranking confirms that in addition to providing local leadership in our region, the amazing work being done every day in our classrooms and laboratories has an influence being felt around the globe.”

UNBC is the only university in British Columbia included in the rankings and one of only four Canadian universities on the list.

Last year, UNBC made its debut in the Times Higher Education World University Rankings, placing in the top four per cent of universities worldwide. The same 13 performance indicators around teaching, research, international outlook and knowledge transfer that led UNBC to score so well in the overall rankings are used in the Young University Rankings, however the methodology is recalibrated to give less weight to reputation.

UNBC excelled in the international outlook category, which considers factors ranging from international collaboration to the international to domestic student, faculty and staff ratios as well as industry income, which measures knowledge transfer by examining the amount of per capita research income an institution receives from industry. The University also scored well in citations, which demonstrates the global impact of the research undertaken at UNBC.

“Since its inception less than three decades ago, UNBC has strengthened its roots in Northern British Columbia and also demonstrated its global impact through award-winning teaching, groundbreaking research and exceptional service,” says UNBC Board of Governors Chair Tracey Wolsey. “This recognition from Times Higher Education underscores the fact UNBC is a destination University committed to preparing the next generation of leaders while influencing our world today.”
Established in 1990, UNBC is one of the youngest research-intensive universities in Canada, having just celebrated its 25th Convocation.