The Bioenergy Plant at the University of Northern British Columbia’s Prince George campus has achieved Platinum certification in the Leadership in Energy and Environmental Design (LEED) Green Building Rating System from the Canada Green Building Council.

While it is becoming more common for new buildings to be LEED certified, the Platinum designation for the Bioenergy Plant is notable: 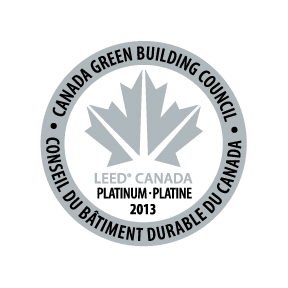 “We are exceptionally proud of having achieved this certification and of our continued commitment to sustainability at UNBC,” said UNBC President George Iwama. “It is very difficult to achieve LEED Platinum certification: this is one of just 23 such certified buildings in Canada and only the third building in Prince George to achieve any LEED certification. This is a great accomplishment for Northern BC.”

The Bioenergy Plant began heating buildings on the Prince George campus in March, 2011. Featuring gasification technology supplied by Nexterra Systems of Vancouver, the facility uses sawmill residue provided by Lakeland Mills of Prince George, a local, family-owned sawmill. About 4,100 tonnes of hog fuel were used in 2012, producing 62,000 gigajoules of energy, and offsetting close to 90% of UNBC’s fossil fuel consumption for heating the buildings connected to the district energy system.

In addition to exemplary emission reduction and energy and water saving measures, a number of design and construction initiatives improved the LEED ranking: designing the building footprint to reduce the overall construction site size; reducing negative impacts on water and air quality through the use of erosion control strategies; achieving highest levels of indoor environmental quality pre- and post-occupancy by flushing the building with 100% fresh air prior to occupancy, installing low-emitting materials and finishes, providing various means of light, airflow and temperature controllability and providing ample daylight and views; minimizing light pollution by eliminating uplighting and controlling light spillage; and reducing the “heat island” effect by using light-coloured roofing materials.

“It was our goal all along to exceed the targets that were established, and by working closely with all the partners, we were able to deliver,” added Dennis Schwab, president of IDL Projects Inc., the Prince George-based construction firm that built the Bioenergy Plant. “We diverted more than 38 tonnes of waste from the landfill; used metals, concrete, insulation, and Gyproc with post- and pre-waste content; and more than 20% of building materials, including glue-laminated lumber, concrete, aggregate, Gyproc, rebar and forming lumber, were sourced regionally.”

In addition to sustainable construction practices, several ongoing operational efficiencies were considered when the building was designed, that have resulted in a 60% reduction in energy use compared to the reference case in the Canada Model National Energy Code for Building.

“At the start, UNBC set out several parameters for this project to achieve. It needed to be more than an industrial building, it needed to achieve LEED Gold, and it needed to be beautiful,” said Karen Marler of Hughes Condon Marler Architects, the architect who designed the plant. “The facility’s prominent location on campus presented some interesting opportunities for the design. We oriented the laboratory spaces to the front of the building to enable its occupants to benefit from the natural ventilation, day lighting and views across campus. This was made possible by the uniqueness of the site’s slope and bank, which allowed us to minimize the appearance of the facility’s mass and literally bury it into the hillside, giving the people spaces more prominence.  It was through UNBC’s support and commitment to sustainability that enabled the Bioenergy Plant to achieve the LEED Platinum rating.”

“The innovation in design and construction, and the commitment to excellence on this project on the part of all those involved was simply outstanding,” explained Prince George Construction Association President Rosalind Thorn. “As we enter a period of enhanced economic activity in the North, it’s clear that we have the expertise and workmanship to deliver projects of high value that can stand as examples to the world.”

In addition to heating the core campus building, the Plant is intended to serve as a platform for applied research and education and an early project has been exploring the use of ash as a soil amendment. Integrating teaching, research, and campus operations in the use of bioenergy earned UNBC the top campus sustainability award in North America in 2010 (shared with Harvard) from the Association for the Advancement of Sustainability in Higher Education.

UNBC has two operating bioenergy systems on campus: the gasification technology in the Bioenergy Plant and a wood pellet system in the I.K. Barber Enhanced Forestry Lab.

The construction cost of the Bioenergy Plant was about $15.7 million and funded by the BC Public Sector Energy Conservation Agreement, the provincial Innovative Clean Energy (ICE) fund, and the federal Knowledge Infrastructure Program.