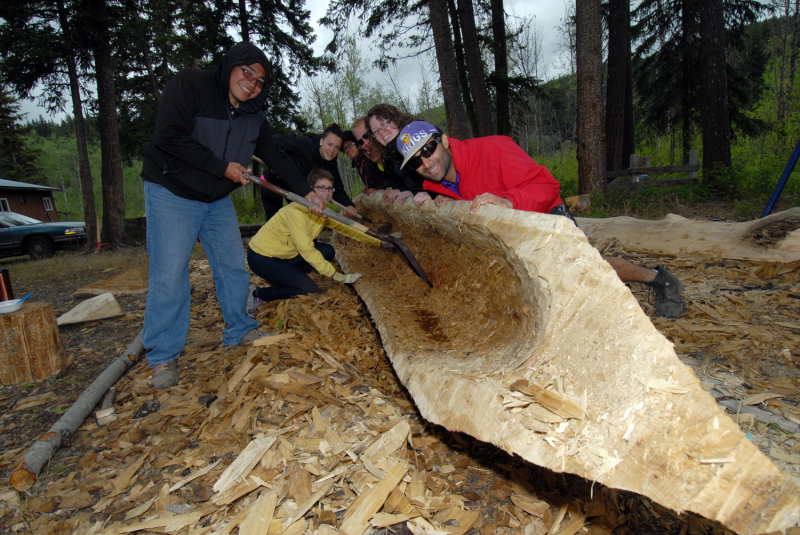 For the first time in an estimated 60 years, a traditionally-made cottonwood dugout canoe was launched by Lheidli T’enneh Elders Robert Frederick and his wife Edie, and UNBC students into the Nechako River which runs through Lheidli T’enneh territory. The vessel is one of two hand-made canoes crafted by UNBC students who recently completed a First Nations Studies course called FNST 298/301 Dakelh Culture: Making a Cottonwood Canoe – Ts’i, taught by Mr. and Ms. Frederick.

“Students in this course learned all about the history, culture, politics, and traditions of the people, right here on their land,” says UNBC First Nations Studies Professor Antonia Mills, who oversaw the course. “Learning from these Elders is an amazing experience, but we also found out from Robert that this was the first time a cottonwood canoe was put into the River in such a long time. It gave the experience all the more meaning for both students and teachers.”

“It’s the first dugout in about 60 years to be launched in our territory,” says Frederick. “By teaching them our history and culture we’re ensuring that it will live on.”

“Robert grew up with the last generation of Elders who made the canoes in the 1950s, and was able to learn from them, so he is an invaluable resource for Lheidli T’enneh in keeping our history and traditions alive,” says Ms. Frederick. “There are only a few people like my husband left, whose stories and traditions were passed down to him directly from the Old Elders, like his mother and father. Learning about the tools, art, history, and culture of the Lheidli T’enneh from the people who have an intimate knowledge is the best way of learning.”

Dr. Mills says that the Lheidli T’enneh began using commercially made boats in the ‘50s and 60s, so the craft of making cottonwood canoes nearly died out.

Frederick grew up with cottonwood canoes and made two in recent years. He also learned art and carving from famed Northwest Coast artist Ron Sebastian, whose work includes the doors to the UNBC Senate Chamber and the ceremonial chairs used at Convocation.

“Lheidli T’enneh means The People from the Confluence of Two Rivers in the Dakelh language, and  refers to the place where the waters of the Nechako and Fraser Rivers meet, and the Lheidli T’enneh call home,” says Jennifer Pighin, a UNBC masters student in First Nations Studies, who was the Teaching Assistant for the course. “That’s why this course is special: the rivers of two cultures are meeting and making each other stronger.”

Frederick soon provided the City with a traditionally crafted dugout canoe that included the “Story of the Salmon” beautifully carved onto one side. For the sake of preservation, the City made a fiberglass copy of the canoe and donated the original to UNBC, where Pighin and Dr. Mills used it as the basis for a new, experiential course last winter semester.

“This course showed me how to think in a completely different way,” says Julian Brown of Burns Lake, a first-year student enrolled in the Northern Advancement Program, a transition year program UNBC offers for rural and Aboriginal students. “I like the way indigenous knowledge is being incorporated in UNBC’s curriculum. I like that it focuses on the positive aspects of recent aboriginal history. I enjoyed sharing that with my classmates.”

Media Download: Julian Brown of Burns Lake, a UNBC student enrolled in the Northern Advancement Program, works on one side of a canoe carved by Course Teacher Robert Frederick.

The course on the Lhezbaoonichek Reserve added to experiential learning by taking place right beside the Nechako River at the north end of the North Nechako Road. Nechako means “strong undercurrent river.”

The course was funded by donors to UNBC directing funds raised to meet three of the University’s needs: student recruitment, student retention, and strengthening UNBC’s connection to the region. The Undergraduate Experiential and Service Learning program has been created, providing opportunities for students from multiple disciplines to get involved in the community through their coursework.