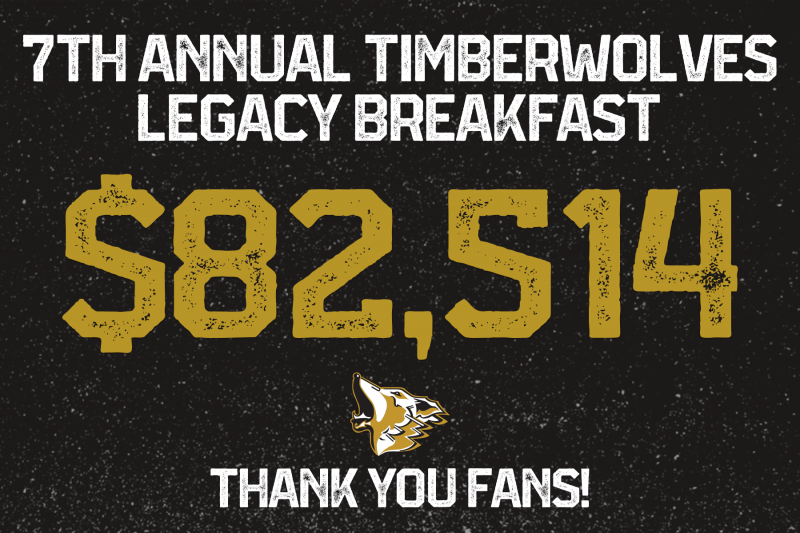 In an unprecedented year, at an event unlike any other held in UNBC’s history, the TWolves fans and supporters stepped up. So much so, in fact, that the 7th Annual UNBC Timberwolves Legacy Breakfast is officially the most successful in the event’s history. Despite being held virtually for the first time, $82,514 was raised, with all proceeds going directly to scholarships and bursaries for Timberwolves student-athletes.

“Every year, it blows me away how much support we have from this community,” said UNBC Athletic Director, Loralyn Murdoch. “We made a decision to push forward with this event, and I am so thrilled with how it turned out. To set a new record for fundraising is really amazing, and will benefit our program so much.”

Prince George native Jon Cooper delivered a keynote address from Tampa Bay, detailing his youth in Northern BC, and the Tampa Bay Lightning’s rise to winning the 2020 Stanley Cup championship.

“When we announced Jon Cooper as our keynote speaker, the reaction was immediate. He is so incredibly proud of his roots here, and this community is so incredibly proud of him and all his accomplishments,” said Murdoch. “We cannot thank Jon enough for taking time out of his busy schedule. He was relatable and humble, and had so many interesting things to say about his journey and what it takes to find success.”

“I couldn’t be more proud of our student-athletes this year. They really were dealt a tough hand, but they adapted and were so resilient. To feature them in the Legacy Breakfast made a ton of sense, and I have heard so many good things about that decision. Our Timberwolves truly are amazing ambassadors for this university and this community.”

For the seventh consecutive year, Canadian Tire was the presenting sponsor. Murdoch stresses the support of Selen Alpay and his team at Canadian Tire as crucial to the operation of the breakfast.

“A massive thank you to Canadian Tire. Without Selen and his generosity, we truly would not be able to pull this off,” said Murdoch. “For them to step up, year after year, is amazing. Even though they knew things were going to be different this year, Selen came through, and I couldn’t be more grateful for Canadian Tire, and for all our sponsors.”

The entirety of funds raised will go directly towards scholarships and bursaries for TWolves athletes. As the program strives for bigger and better things in the Canada West conference, the continued support of those in attendance, and the support of those participating in the online silent auction cannot be understated.

“Without scholarships and bursaries, we would not be able to attract the best student athletes to UNBC,” she said. “It is so important for our coaches to go out into the community, or the province, nationally or internationally, and provide students with some funding. This community is so supportive, and we are so proud to represent Northern BC.”