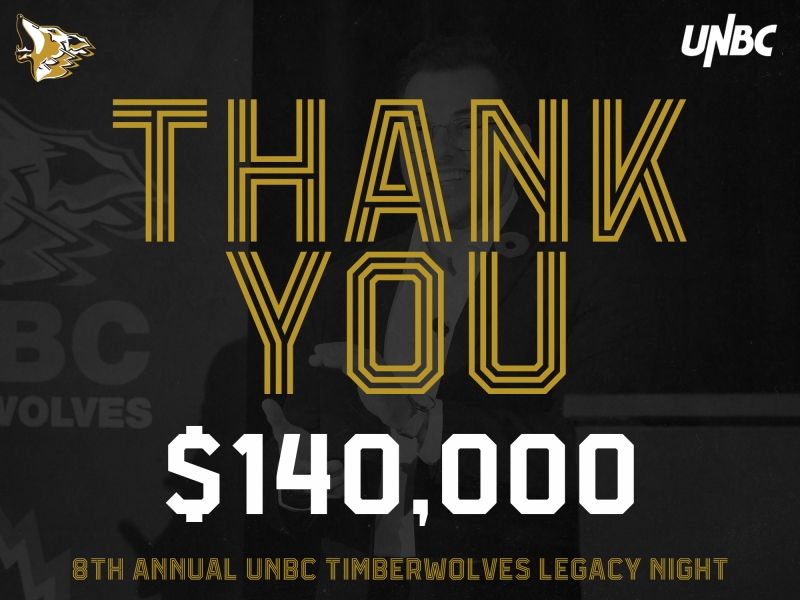 Every year, without fail, the faithful supporters of the UNBC Timberwolves show up in a major way.

After setting a Legacy Breakfast record by raising $82,514 at the 2021 event, that number has been blown away this year by the generous donors and fans of the TWolves.

With all proceeds from the event going directly to University of Northern British Columbia student-athlete scholarships and bursaries, the 8th Annual Timberwolves Legacy Night raised more than $140,000.

“The amount of support we receive year after year truly blows me away,” said UNBC Director of Athletics, Loralyn Murdoch. “After raising more than $80,000 last year, I was hopeful we could get to that total again this year. When I saw how much support we received this year, I was floored. This community is incredible.”

For the first time in the event’s history, the fundraiser was moved to the evening, after seven years of being held in a breakfast format.

“The Legacy Breakfast was an amazing success for seven years, but we wanted to try something new,” said Murdoch. “We wanted it to be more social, and to allow our athletes to really get to know the people who support our program so loyally. The organizing committee did a wonderful job shifting the occasion towards a fresh feel, and I was so thrilled with how it was received by all in attendance.”

Kaleb Dahlgren, bestselling author and survivor of the Humboldt Broncos bus crash, served as keynote speaker for the event. The 25-year-old delivered an enthralling and emotional address, detailing his journey of dedication, perseverance, and positivity. UNBC Wall of Honour inductee Tofa Fakunle also spoke, as did Jocelyn Kerr, a local teenager who became a part of the Timberwolves family while battling cancer this year.

For the eighth consecutive year, Canadian Tire was the event’s presenting sponsor, making it possible to operate the event.

“We can’t thank Canadian Tire enough for stepping up year after year,” Murdoch said. “Without Selen Alpay and his incredible generosity, we would truly not be able to pull this off. Selen and his team understood our vision for giving the fundraiser a new look and feel, and they trusted us to deliver. I couldn’t be more grateful for Canadian Tire, and for all our Legacy Night sponsors.”

The entirety of funds raised will go directly towards scholarships and bursaries for TWolves athletes. As the program strives for bigger and better things in the Canada West conference, the continued support cannot be overstated.

“Without scholarships and bursaries, we would not be able to attract the best student-athletes to UNBC,” said UNBC President, Dr. Geoff Payne. “We aim to recruit great athletes, but also great students, great people, and great ambassadors. This support really goes a long way. I cannot stress how appreciative we are of the community for the continued support of the Legacy Night. It was truly a special evening, and I am already anticipating the 9th Annual Legacy Night. Go Timberwolves.”