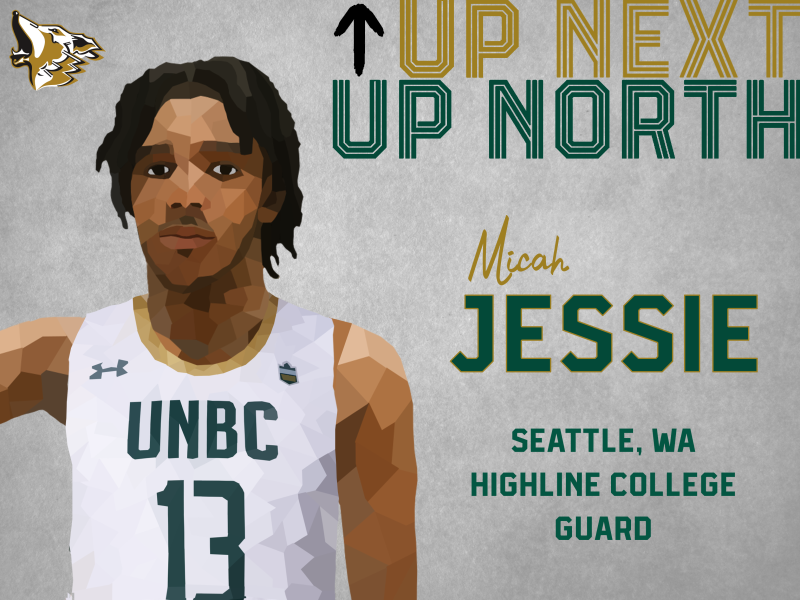 Timberwolves fans….Friday and Saturday nights at the Northern Sport Centre just got a little more electrifying. The University of Northern British Columbia Men’s Basketball team has added a dynamic piece to its backcourt, officially announcing the commitment of college All-Star Micah Jessie for the 2022-2023 Canada West season.

“This means a lot to me. To be given the opportunity to come out there and play for UNBC. It’s a different environment for basketball and to live in. It’s something I have always wanted to experience, having lived in Seattle for so long. I feel like being able to get out of town will be something new, fun, and interesting.”

Jessie is a product of Seattle, Washington, where he was a State champion with Garfield High School, under the watchful eye of coaches Jayvon Nickens and former NBA star Brandon Roy. From there, he made the leap to Highline Community College of the Northwest Athletic Conference, where he played his first two seasons of eligibility. The six-foot-four scoring guard will arrive at UNBC with three years of eligibility to play out in green and gold.

“This is me trying to continue with my basketball career. Going to UNBC feels like the best fit for me, to better myself academically, get my degree, and improve as a person and as an athlete.”

To say Jessie is a dynamic threat is an understatement. After a freshman season with Highline that saw him average 14 points per game, he took a leap last year. With an increase in playing time and responsibility in coach Che Dawson’s system, Jessie averaged 19.5 points, 4.1 rebounds, and 2.8 assists per game, shooting 54 percent from the field in the process. He was named to the NWAC First Team All West Region, propelling Highline to a 9-5 record in conference play. Despite the success, he expects there to be an adjustment when he suits up at the highest level of Canadian university basketball.

“I would say the biggest adjustment is probably playing against more mature players. Physically and IQ-wise, they are more developed, and have more knowledge on the game. I am an attacking guard. Quick off the dribble, athletic, and I can shoot the ball too. I feel like I have a deep bag. My euro-step is mean. It’s pretty hard to guard it, and I can finish with my left hand and my right hand.”

The Timberwolves bid farewell to a massive component of its ball-handling and attacking threats at the conclusion of the 2021-2022 season, with the graduation of senior guards Tyrell Laing, Vova Pluzhnikov, and Payton Tirrell. Coach Todd Jordan was looking to fill that void, and was immediately drawn to Jessie’s speed, length, and ability to score in a variety of ways. Jessie built a relationship with UNBC assistant coach Aaron Brouwer, and decided Northern BC was the right place to continue his hardcourt career.

“I am really thrilled to be adding a player and person of Micah Jessie’s calibre to our program. Micah is a proven producer at the Juco level and was a state champion in high school,” said Jordan about his new recruit. “He will bring athleticism and add some serious scoring punch as a slasher and a guy who is really productive attacking in transition. His game is dynamic, and opens up a lot of possibilities for us. We are extremely excited to add a player of his calibre to our roster.”

Jessie is sure to become a fan favourite at the NSC, with his innate ability to finish in transition and make jaw-dropping stops at the defensive end. He has honed his game with the Seattle Select program, as well as Local Hoops with coach Kelly Edwards. The 20-year-old started playing the game when he was 11, and tries to bring that joy every time he takes to the court with a ball in his hands. .

“More towards the seventh and eighth grade is when the game of basketball started to come to me and it was something I really enjoyed. I always have fun playing. To me, there is so much you can do. I love trying to dunk all the time, and getting chase-down blocks. Those two things are my favourite in the game of basketball. And competing.”

Set to join his new teammates in Prince George in August, Jessie is enrolled in UNBC’s interdisciplinary studies this fall. He has aspirations to play the game professionally, with an additional goal of starting his own clothing brand. For now, he is ready to don the green and gold, and get to work with the Timberwolves, as they prepare for the Canada West campaign.

“I feel pretty excited. I am ready to get to work and start working with the guy. I want to do something this season. I am trying to accomplish goals, so that’s my plan. Thank you for giving me this opportunity. I won’t let you guys down. I appreciate it.”