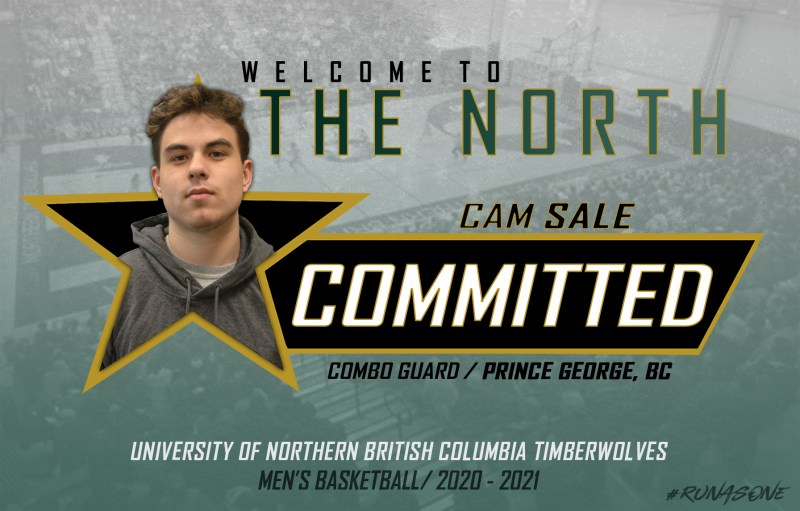 He has been watching Timberwolves games since he was, quite literally, a baby. Now, he will take the floor in a TWolves jersey. The University of Northern British Columbia’s Men’s Basketball team is excited to announce the official commitment of Prince George product Cam Sale for the 2020-2021 Canada West season.

“I think it’s going to be awesome. I am really excited for this opportunity, and I am proud to wear the UNBC uniform. To get the opportunity to under Todd and the great coaching staff, I am glad to stay at home as well, and play with good teammates. I have seen how fun it is to play here in front of my hometown. In front of friends and family.”

Sale, who is a combo guard with an innate ability to score the basketball, grew up soaking up all his opportunities in Northern British Columbia. He has long played Junior Timberwolves under the watchful eye of UNBC coach Todd Jordan and Aaron Brouwer, and more recently, he trained with Jordan Yu at Northern Bounce. Those experiences, along with playing for his Dad, Greg Sale, who is a two-time National Champion with the Alberta Golden Bears and now coaches his son at DP Todd Secondary, gave Cam the ideal combination of influences as he pursued post-secondary basketball.

“I think all the different coaches helped me, with Jordan Yu, my Dad, and Todd Jordan, all helped me with different aspects of the game. They had different views and it helped me in the end. I think it’s cool I come from a small school like DP Todd and I get to play for a really good team. I get to show, for DP Todd, that I am pretty good player and I can play next level basketball.”

Standing six-feet tall, Sale has never been the biggest player on the court, but he makes up for it with savvy and body control. And, of course, the ability to shoot the lights out. In one game at the BC Provincial Championships this year, he buried ten three-pointers against J.L. Crowe. The 17-year-old hopes his game translates to the U SPORTS level at both ends of the floor.

“I think I am a really good slasher, and that is my game. But I can also shoot. I can be streaky, and if it’s not falling, I try to get to the rim. Defensively, I have really improved the last three or four years. I wasn’t a very good defender before, but now I like that challenge of guarding the best player of the other team. My mentality, if there is an intense game, I will always try my hardest and I will get on the floor if there is a loose ball.”

Timberwolves bench boss Todd Jordan identified Sale as a young athlete with the potential to play university basketball when he was coming up in the Junior TWolves program. When he was playing for the Timberwolves in the early 2000’s, Cam’s father Greg served as an assistant for UNBC, providing guidance to Jordan when he was a young shooting guard playing in his hometown. Jordan is excited to go full circle, and add Cam to the program, where he can learn from veteran guards like Tyrell Laing, Vova Pluzhnikov, Chris Ross, and Payton Tirrell.

“I am very excited to add Cam to our program.  I have known him since he was young and watching him develop has been great to see.  He is a true competitor on the court, and a really good shooter who has proven to be a reliable scorer at the high school level.  We are always extremely excited when we can bring local players into our program who we feel will be able to contribute.”

Sale’s basketball resume is already impressive, as he concludes his high school career as a three-time City All-Star, a two-time Zone Most Valuable Player, a Zone Defensive MVP, and a two-time BC Provincial All-Star. The Principal’s List honoree intends to pursue a Bachelor of Arts at UNBC, with the potential goal of becoming a PE teacher. He will join his new teammates this fall for training camp, in preparation for the next step playing the game he loves.

“Physically, it is going to be a lot tougher. Obviously, guys are way bigger, faster, and stronger than the high school level. Practices are going to be a lot harder. That next man up mentality. I have always loved basketball, since I was two or three years old. I just love playing with my friends. It makes me happy, honestly.”