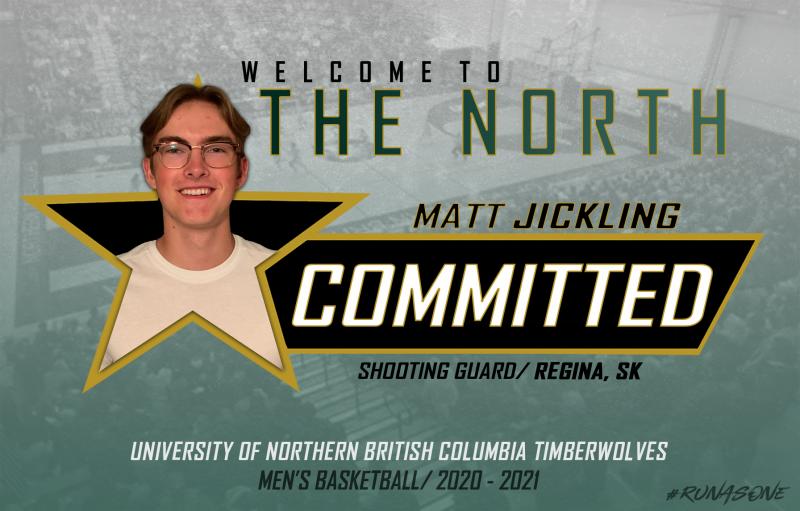 “I am super excited to be fortunate enough to play basketball at the next level. I love the game, and I am really excited to play at UNBC. It has been a goal of mince since I was a young kid, watching the Men’s team play in my hometown. As I got older, I realized I needed to put hours in at the gym to improve my skill, and reach my goal.”

The 18-year-old Jickling is a product of Elite Basketball Training, under coach Khalid Loda. Due to an adapted recruiting process with travel restrictions, he is yet to visit UNBC’s Prince George campus, but that hasn’t dimmed his excitement to play basketball at the U SPORTS level.

“I chose the Timberwolves because the program Coach Jordan described sounded like a great fit for me, athletically and academically. Unfortunately, due to COVID-19, I was unable to tour the campus or speak to the players, but I did meet with Coach Jordan. I was really impressed by his approach to focusing on the balance between academics and basketball. It was clear to me that this was the perfect choice for me.”

Jickling stands six-foot-four, and projects as a shooting guard / small forward combo at the university level. He is long-limbed and athletic, and can shoot the ball from beyond the arc.

“I am a tall guard and I take pride in my defense. I like to challenge myself to stop whoever I match up against. I am also a playmaker and I try to find my teammates whenever they’re open.”

Timberwolves coach Todd Jordan identified his newest recruit as an athlete with plenty of potential. The UNBC bench boss has long been committed to adding quality people, so Jickling fits the ball on and off the court.

“We are really happy to add Matt to our program. He is a longer guard who can really shoot the ball.  We feel that he still has a lot of room to grow and develop and we are excited to work with him through that process.  He is a high-level student and should be a great addition to our team and our culture.”

The Saskatchewan product will spend his first season in green and gold as a redshirt, training with the varsity roster and learning from veteran guards like Vova Pluzhnikov, Tyrell Laing, and Payton Tirrell. He hopes to absorb as much as he can in the 2020-2021 campaign, so he can be ready to make an impact next year.

“In my first year with the team, I want to get stronger as a player. I want to show my coaches and my teammates what kind of player I am. I also want to develop into the best player I can be. As a redshirt, I want to put myself in the best possible position for next year.”

A graduate of Campbell Collegiate, he will enroll in Nature-Based Tourism Management at UNBC. The honour roll student has playing basketball since he was in Grade 6, and is ready to resume his career playing the game he loves.

“I love the game of basketball, because it has always been something my family would play together. As I got older and continued to play, I developed a love for the competition and the positive relations that came out of playing the game.”