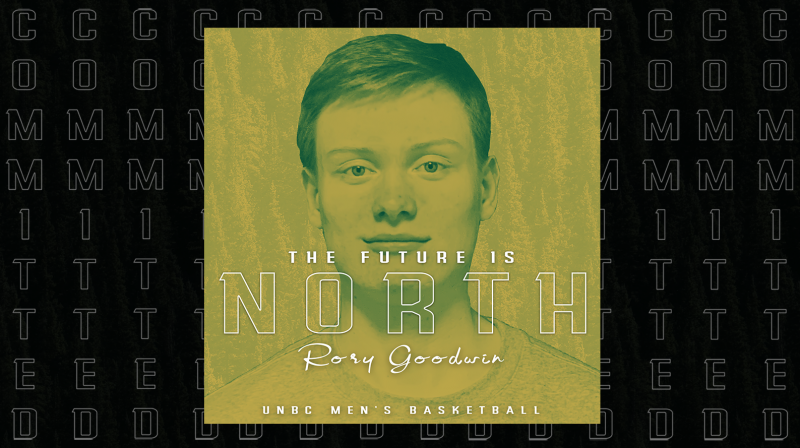 The University of Northern British Columbia Men’s Basketball team has added a swiss-army knife to its backcourt for years to come, officially announcing the commitment of Rory Goodwin to the Timberwolves roster for the 2021-2022 Canada West season and beyond.

“I feel excited, honoured, and a little bit nervous. I just can’t wait to get started. This is what I have always dreamed of, and I am looking forward to the next five years with Coach Todd (Jordan) and UNBC. I am most looking forward getting to know my new team and the new challenges of playing university basketball. I am also looking forward to just playing basketball again.”

A product of North Vancouver, Goodwin stands six-foot-four and can play any of the wing positions. Due to COVID restrictions, there was no season for the St. Thomas Aquinas Secondary School, nor was Goodwin able to participate in a full recruiting process with campus visits and identification camps. Despite that, he identified UNBC and the Timberwolves as an ideal next step for his journey in the classroom and on the hardcourt.

“I chose UNBC because I got to know Coach Todd quite well over the last few months through video calls and emails. Everything I have heard from players is about the great team aspect, culture, and style of play. What stood out for me was the support they have for the players on the team, and the classes I am interested in. The small class sizes make it easier for learning, as well as the beautiful campus they have at UNBC.”

The 17-year-old moves fluidly on the court, playing comfortably with the ball in his hands, or off the ball. For the STA Fighting Saints, Goodwin averaged 24 points, 12 rebounds, six assists, and 1.5 steals per game, and earned All-Star status at the 2019 BC Provincial Championships. He played for coach Jim Kelly at STA, where he was named a tournament all-star on seven occasions in the 2019-2020 campaign. Goodwin expects there to be an adjustment at the highest level of university sport in the country, but he is committed to working every day to improve.

“The fans can expect me to leave everything on the court. I play with 110 percent, and I never give up. I like to play a team game and get my teammates involved, and I like playing with energy and making highlight plays.”

Timberwolves coach Todd Jordan identified Goodwin for all the little things he does on the court, taking note of the way his newest recruit understands how to get to the rim, but also his willingness to get his teammates involved. After an unorthodox year due to health restrictions, Jordan says the current group of TWolves are tremendously committed to hard work; a quality he expects Goodwin to add to from day one.

“We are really excited to add Rory to our program. He will add some real flexibility to our lineup. He can play two or three different positions and has shown the ability to make really good decisions off the dribble. He’s an extremely hard-working guy with a great mindset, and I think he has the potential to develop into a very good player in his time here at UNBC. This is a good day for us.”

The 3D Basketball product, who has been refining his game with coach Matthew Raimondo, will graduate from secondary school in June before joining his new teammates for training camp in August. With eyes on pursuing history and political science at UNBC, Goodwin is ready to continue a basketball journey that began when he was just nine-years-old.

“Basketball, for me, has always been an escape from everything. Somewhere where I can just be free. I love the pace of the game and the close games we have. I love it being something I can dedicate myself to, and that I can strive to get better at every day. I love the relationships you build with teammates and coaches.”